What skills to learn, what tools to get
Post Reply
789 posts

Here on the wet coast, wireworms (click beetle larvae) are a fact of life. A few holes in your potato are reasonable to deal with, but last year there was an infestation of the things and my potatoes were ugly like a teenager with bad acne. To get rid of damage this bad and produce an edible potato, one has to essentially peel it twice or thrice.

The infestation may have been my fault for ignoring the possibility or it may be a consequence of hot summers. Consequently, controlling the wireworm population is a priority this year (and in the future). The bad news is that this is difficult, partly because the critters move up & down in the soil depending on temperature & moisture and partly because they can spend many years as larvae before turning into the adult beetle.

Leave them no food (bare soil through the winter), tilling the soil 6" deep a couple times prior to planting, using traps (potato slices skewered with a stick & buried), a final tilling of 2" before planting, and applying the proper beneficial nematode species are the steps.

I've taken two passes at the tilling immediately prior to frosty nights, so have some hope that they either froze to death or the birds feasted on them in the morning. Today I've added traps to the garden and will check them in 3 days. 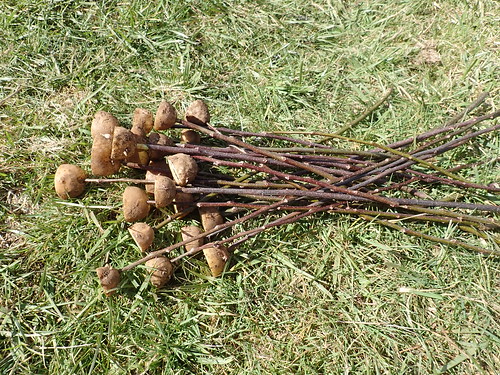 The traps in position: 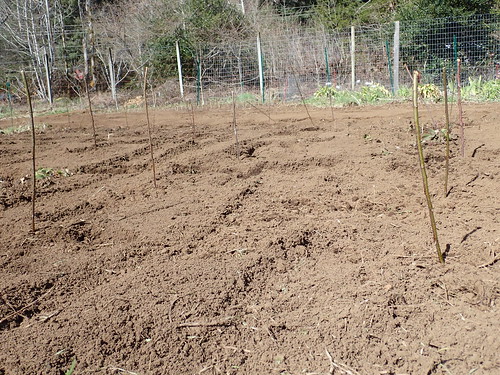 Motivation pictures for those who haven't been able to start their gardening yet this season.

Onion plants planted a couple weeks ago and the pea trellises beyond: 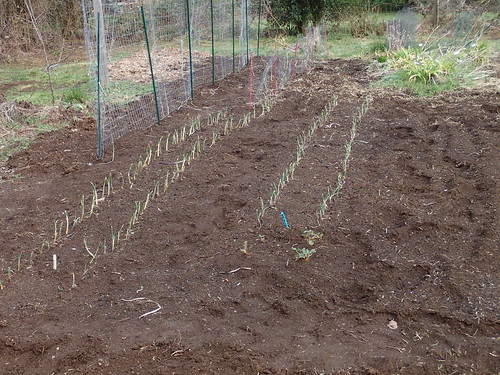 Strawberries in a temporary holding bed before (hopefully) moving into strawberry barrels: 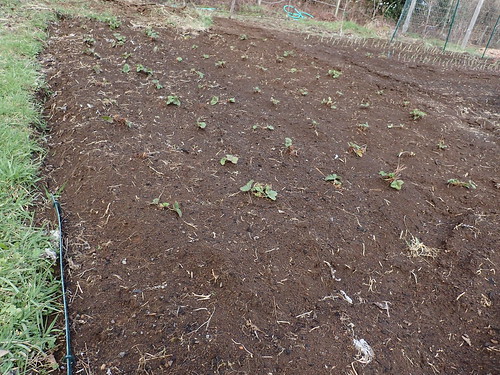 And the obligatory picture proving that spring is beginning even if there isn't much you can plant now: 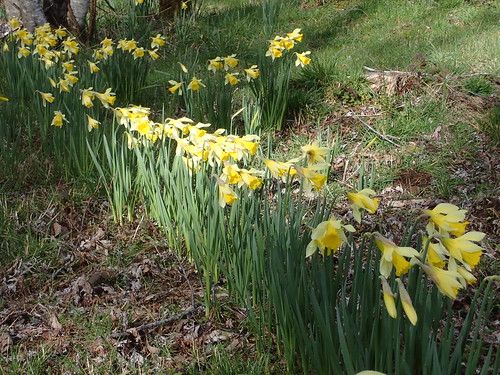 Did you trap any wireworms?
Top

Not yet, though there was one lying on the soil underneath a trap. It has been raining, so I think the ground is too waterlogged & cool for the wireworms to move up. We're drying out now until maybe Friday, so maybe a better chance?
Top

I was curious, so I did a bit of reading. Seems like a very difficult problem. Using their own tendency towards gluttony and laziness (they don't travel far in search of food) to trap them seems like the best plan besides maybe getting some chickens to eat them?

The easiest way to apply the permaculture principle of "let the problem be its own solution" would generally be to simply eat whatever is eating your food, but I doubt that wire worms or click beetles are very tasty.
Top

I built this pond. 27 gallon tote from Home Depot. Harbor Freight Fountain pump. Filter made from a disposable water bottle and some poly fill from a cheap pillow. Free rocks from the local creek and beach. Ten feeder goldfish from Petco. 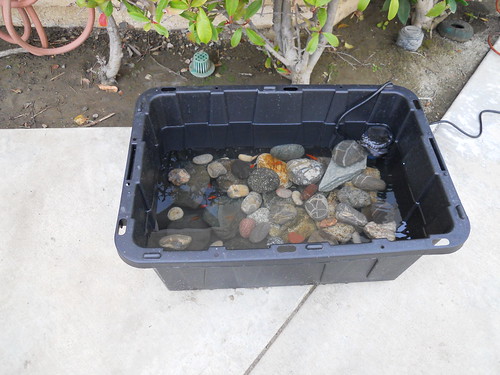 That is a cool idea! I wonder if it would work with one of those galvanized stock tanks from the feed store? Do you plan to put any pond plants in it?

Do you have any pics of how the filter setup works?
Top

I’ve seen people use stock tanks. I live in the suburbs and there aren’t any feed lots nearby. The totes are really cheap at Home Depot. I think it was $9 but I later saw it at Costco for $6.50.

I tried some free duckweed but I didn’t like it swirling around...made me nervous. I went down to the garden shop and they had lily pads but they wanted $39 for them. I decided to find some free sources of aquatic plants.

Out here in the SoCal suburbs we don’t have much living in our streams. Too much herbicide use to keep the sidewalks pretty. It’s pretty much destroyed amphibians and plants in the creek beds. I was hoping to kind of set this up with free plants but I’m having trouble locating them. The idea was to have a mini water garden in there.

The pump is really simple. It is a submersible fountain pump from Harbor Freight ($7 with coupon) that shoots up into a water bottle with the bottom cut off. I stuffed some polyester fiber and a piece of open cell foam into it to act as a filter. The water just rises up out of the top of the bottle. I’ve had really good results making fishtank filters with polyester pillow stuffing in the past. Gets the water really crystal clear.

I found this. Mine kinda looks like this.
http://www.dramaticaquascapes.com/diywa ... cap01.html
Top

Did you trap any wireworms?

And... yes, but not in the traps I intentionally set up, LOL! There were some stray potatoes I rototilled under and then I rediscovered the chunks while rooting out any weeds that survived the tilling. About 50% of the scraps had 1-5 wireworms and there were loose wireworms in the tilled soil.
Top

Congrats to all of you with your lovely gardens. I see that many of you grow your own vegetables. How do you store them? I'm asking because in the future I would like to grow vegetables myself but our house doesn't have a cellar. I'm not sure if it's feasable to build a garden cellar. I should check with some experts. Any (frugal) alternatives?
Top

Storage depends on your climate and goals. If you want long term storage (more than 6 months), nothing really beats canning/freezing. Drying/smoking is good, but generally doesn't have FDA-approved longevity unless it is vacuum-sealed.

My climate is ideal for storing use-through-the-winter moist root crops in the garage (potatoes) and is okay for storing dried root crops (onions, garlic). Excess blueberries, corn, & carrots are frozen. Excess tomatoes are dried and stored in baggies in the fridge. Potatoes & carrots (& beets?) can be left in the ground or put into a "clamp" provided you can keep the bugs & vermin out; moist construction sand in a container is an indoor method that I haven't tried yet.

Apart from the above, though, we eat the garden produce fresh. The gardening game then switches from "storage" to "extending the growing season". Around here, lettuce/spinach/kale started in August will be somewhat mature before available before sunlight drops to the point nothing grows, so sheltering them in hoophouses from the frost/snow is all that is required to continue harvesting fresh greens.
Top

First round of direct sowing lettuce, radish, spinach, beets, broccoli, & carrots have been carried out in the past week. Transplanting celery & broccoli started indoors has been done, too... didn't want to move the celery outdoors yet (to avoid bolting), but the broccoli wouldn't let go of the cell while all the celery fell out. Carrot seed germinated indoors in a jar & transferred to an outdoor pot is doing okay, with about half the seeds having tops.

Local stores have had tomato & pepper plants in stock since April 1. Guess it's time to get them whether the greenhouse is ready or not.

Neighbor who gardens in containers because of a small lot is now using an overturned pick-up canopy for peas & carrots. He couldn't give away the canopy, so put it to work!

The thermometers have told me that greenhouse or cold frame soil temps aren't stable for warm weather crops here until the last week of March. And automatic ventilation is a necessity for cold frames otherwise things will cook. It might be possible to move that date earlier with a thermal mass. I don't know how early cold weather crops could begin... minimum 40F soil temps were already obtained in mid-March when I began the measuring, so it's a matter of whether the crop will bolt if the temp swings are too great (I'm looking at you, spinach).

Sclass wrote: ↑
Mon Apr 09, 2018 3:53 pm
I tried some free duckweed but I didn’t like it swirling around...made me nervous. I went down to the garden shop and they had lily pads but they wanted $39 for them. I decided to find some free sources of aquatic plants.

I used to have this stuff in a pond and it grew like crazy https://en.m.wikipedia.org/wiki/Java_moss

Not very pretty, and it likes shade, but it is tough as nails and grows like a weed. I was able to run a fish tank with no media in the filter with it because it was so efficient at using the fish waste for fertilizer. I didn't even have to cycle the tank. It sells in clumps on eBay for a couple bucks. It's one of those things you have to commit to because it is tough to get rid of though.

I'm definitely stealing your filter idea, that makes the whole set up so cheap I really don't have an excuse not to make one.
Top

I got some of this cheap at a flower stand. It grows in water. Now I need to find a tadpole. 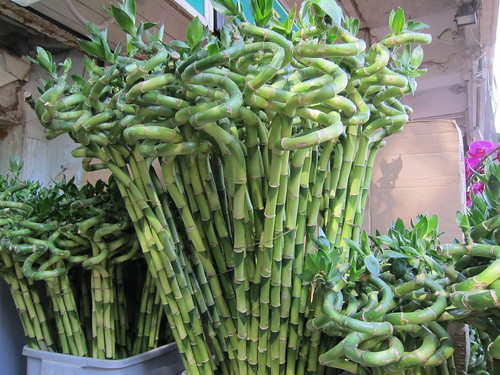 And I ordered some seeds for pond lilies. My SO was joking some Chinese ebayer got me for $0.99 magic beans. Maybe. 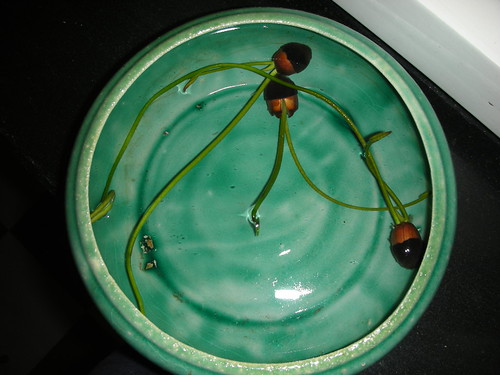 Can't wait to see the final product, that looks like the lucky bamboo those guys try and sell at the mall for 10 bucks a stalk lol.
Top

The potatoes arrived on Wednesday, but it's been far too rainy (8+" in the past week) to get them planted. Fortunately various stuff direct-seeded last week is sprouting. Hmm, not really sure what is what right now because I didn't keep notes!

Bought pepper and tomato plants at the store, started watermelon seeds. Need to get the greenhouse reconstructured soon, though I might hedge by making a coldframe to stash the peppers & tomatoes.
Top

We finally had a couple of warm days. It was nice to get out into the garden and get my hands dirty. I used to do what needed to be done first, but I'm getting old and selfish. First, I cleaned up the area where I like to have my morning coffee, set out the furniture and put out a pot of pansies. Then I weeded around the fire pit and set it out, along with the chairs and some pots of flowers. There was some time left to clean up the worst of the storm debris from the winter so I didn't completely ignore the mess. It's just that I wanted to be able to enjoy the garden as soon as possible.

I wasn't planning on expanding the garden this year, but the neighbors behind us cut down all of their trees and we lost our privacy. I don't want to pay for a privacy fence so I'm trying to figure out what I can plant along the fence line. I don't like 'landscaping' plants. I tend to stick to ones that attract beneficial insects or ones that produce food of some sort. I also want something that grows as quickly as possible. Gotta give it some thought.
Top

@jp - a wall of sunflowers?
Top

@Jenny, good to read you change to more "good life" than always toiling!
And for privacy: you can perhaps leave the (long ?) border with your neighbor as it is and only make some shrubs around your favorite sitting area. In our little garden we have one tactical placed beautiful evergreen shrub. So that we can be naked kissed by the sun without being seen.
Top
Post Reply
789 posts