Our survive method of the moment is: sit still. We can use this time to think how to change to a more lean (logic/ economic) style of living.
for me: still less use of fossil energy, only doing sport with human efforts, plant based food only.
and how to communicate this with other people.
Your thoughts?
Top

Please include wind and sails in the ideal lifestyle scenario.
Top

It's a good time to live in the woods.

So many asymptomatic people, I read as high as 80 per cent of the cases!

But it made me wonder. I've always thought I don't catch colds. Is it possible that I do and just don't get sick? And spread it? The COVID-19 asymptomatic people can spread it just fine.

I guess I won't be finishing up my brewery passport in the Portland area with my friend. It expires the end of the month. But I hope we can go snow shoeing or something outside.

I did experience shortness of breath and fatigue yesterday. 7 miles of running hills can do that to me.

Last I saw still no cases in Eugene, though my friend and his babies are sick with something. Sure just as I finally learn to make new friends again I can't go hang out with them!!!
Top

Maybe I'm missing the obvious, but you know that's The Onion right?
Top

enigmaT120 wrote: ↑
Mon Mar 16, 2020 9:59 am
Last I saw still no cases in Eugene, though my friend and his babies are sick with something. Sure just as I finally learn to make new friends again I can't go hang out with them!!!

Still a mystery to me why Lane County has avoided having any reported cases. I can only assume people just are being good about staying home if ill and/or not calling their doctor.
Top

Finally some honesty from the Trump admininstration regarding COVID-19!


"We are at a critical inflection point in this country, people. We are where Italy was two weeks ago in terms of our numbers," U.S. Surgeon General Dr. Jerome Adams told Fox News. "When you look at the projections, there's every chance that we could be Italy."

Except west coast USA is transitioning to the dry season...
Top

"Shelter in place" for next 3 weeks. Wow, that came on fast.

Counties are shutting down all but the most critical operations. Places that attract clusters of people, like gyms, nightclubs or bars, will have to close down. Restaurants must serve only take-out or delivery orders. Hospitals, grocery stores, banks and pharmacies will remain open.

The order calls for all “routine medical appointments” and elective procedures to be canceled or rescheduled.

Daycare centers and veterinarians will remain open with some restrictions, as will laundry services. Emergency services, like police and fire operations, will also continue.

All non-essential gatherings of any size are now banned.

Figured I'd check on hospital bed availability in my little town of Seaside, Oregon. The hospital currently operates 25 beds, but has been licensed in prior years for as many as 56 beds... don't know if they're currently licensed for the 56 beds, but it indicates a possible overflow potential to have that many if there is adequate staff to serve.

Let's try the other direction, how many cases are the maximum that can be handled? Best case, 56 beds times 5 means 280 cases which is a mere 2.79% of the local population. A more realistic expectation is that the local hospital will be out of capacity when less than 1% of the population is infected.
Top

@GTOO - Hang on! I'd estimate it differently. SK with wide testing and the situation under control (having an experienced government in charge must be nice) has a CFR of 0.7%. Lets presume they found everyone who was infected so this is the true CFR. This means that Seaside will have at least 0.007*6707=47 fatalities.

Roughly only half of who goes into critical survive, so this means that 2*47=94 ICUs are needed. (ICUs are as far as understand needed for 1-2 weeks... it takes about 1 week to die w/o a fancy ventilator) Of those getting admitted to hospitals, about 15-20% end up going to critical. If the rest get normal beds, then the system needs 94/0.15*0.85=532 regular beds.

Seaside, therefore, needs 94 ICUs and 532 beds insofar the curve is not flattened. Once the ICU count is exceeded, ~everybody who needs it but doesn't get access dies.

So if the entire population is infected, 47 will die after using 94 ICUs; 532 will survive on a regular hospital bed; and the rest (6707-532-{47:94}) ~ 6100 will survive in home quarantine with various levels of symptoms... everything from nothing-burger to non-hospitalized pneumonia.

(This is the best I can do in terms of estimating iceberg effects. Also, I don't know what the odds of regular hospital bed vs at home treatment is. Hopefully, there will be a better handle of this soon. Without widespread testing and more countries sorting themselves out and arriving on the other side, it's rather hard to know.)
Top

Augustus wrote: ↑
Mon Mar 16, 2020 3:49 pm
5% or less require hospitalization based on what I've read. Serious just means you feel like crap at home. Age is also a major factor, if the population skews younger, then fewer people will need hospitalization.

80:20 ratio from China was serious=hospitalization.

Of reported cases in Oregon, about 50% have been hospitalized as of last Wednesday. Unfortunately, that number is no longer being reported now that commercial labs are reporting test results.
Top

Demographics here are slanted to retired folk, too, with a median age of 43.
Top

Sadly we have dropped the ball in Denmark.

Testing has basically been halted since last week despite WHO's call to 'test, test, test'.

Schools have been closed but a lot of people are not taking the measures seriously.

The only logical step now is to impose a curfew for everyone. Wonder how much pressure the healthcare system needs to be under before it's imposed.
Top

I wonder how much damage will multi-month-long lockdown cause?

Unintended consequences on the societal level will be quite serious, even disregarding hit to the economy.
Top

Can US states close their borders to each other ?
Top

@thedollar - I noticed the numbers where flattening out. In my [simple] modeling, I calculate between 5000 and 20000 walking cases for each fatality in non-overwhelmed system. This is based on SK CFR, inadequate lock down, a 4 day doubling rate, and roughly 3-4 weeks between infection and potential death. Most of those will not present or be asked to stay in quarantine. Median incubation time is 4 days but can be up to 12. It takes several days of symptoms after which they either get better or rapidly worse. It's only the last outcome that gets tested and registers in countries where the testing system is overwhelmed with demand>>supply. This has been the case in the US. Might be the case in Denmark too now.
Top

The things nobody is saying aloud. 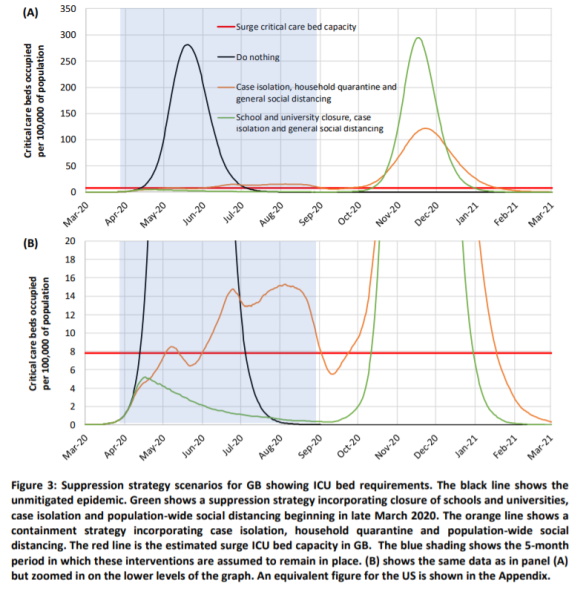 Mitigation: focuses on slowing but not necessarily stopping epidemic spread – reducing peak healthcare demand while protecting those most at risk of severe disease from infection.

We find that that optimal mitigation policies (combining home isolation of suspect cases, home quarantine of those living in the same household as suspect cases, and social distancing of the elderly and others at most risk of severe disease) might reduce peak healthcare demand by 2/3 and deaths by half. However, the resulting mitigated epidemic would still likely result in hundreds of thousands of deaths and health systems (most notably intensive care units) being overwhelmed many times over. For countries able to achieve it, this leaves suppression as the preferred policy option.

We show that in the UK and US context, suppression will minimally require a combination of social distancing of the entire population, home isolation of cases and household quarantine of their family members. This may need to be supplemented by school and university closures, though it should be recognised that such closures may have negative impacts on health systems due to increased absenteeism. The major challenge of suppression is that this type of intensive intervention package – or something equivalently effective at reducing transmission – will need to be maintained until a vaccine becomes available (potentially 18 months or more) – given that we predict that transmission will quickly rebound if interventions are relaxed. We show that intermittent social distancing – triggered by trends in disease surveillance – may allow interventions to be relaxed temporarily in relative short time windows, but measures will need to be reintroduced if or when case numbers rebound. Last, while experience in China and now South Korea show that suppression is possible in the short term, it remains to be seen whether it is possible long-term, and whether the social and economic costs of the interventions adopted thus far can be reduced.

Ego addition: This does not take into account what Bankai just mentioned, the increased death rate due to the resultant economic downturn. Some economists have estimated that increase to be more than the projected Covid deaths. But that cannot be said aloud because everyone has changed their twitter handle to "Flatten The Curve" Fred. Feels eerily similar to when we returned to the US after 9/11 and during the Iraq war when everyone was wearing American Flag clothing and had giant flag bumper stickers. 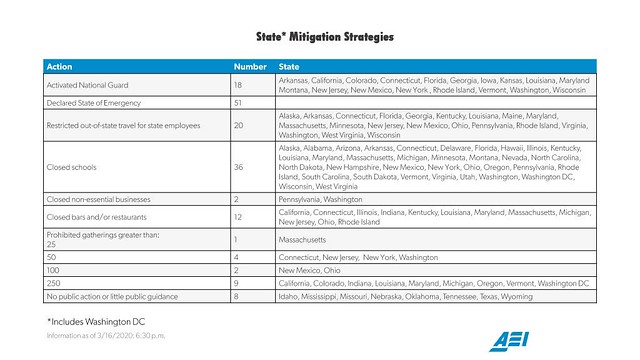