I think I'm missing something, in particular what the proper name for one of these is? The goal is to turn a 1700rpm 1/3HP motor into a disc sander. Plan B would be to buy a 12mm version and attempt to enlarge it to 12.7mm with a 1/2" twist drill bit.
Top

Do you have the disc yet? What does the back side look like at the connection point?
Top

What's pictured is one cast piece. The smooth shaft just goes through as is held by a set screw on the hub (on the ones in the link, there are two holes for set screws). There's no threading. The other (bottom) side is flat. The idea is to cut a round piece of plywood and attach it to the flat side on the thingamajic with 4 countersunk bolts.

I have very limited metal working capacity/capabilities. Since I plan to use it on small/fine parts, the key is to eliminate wobble so it's crucial to get 90 degrees in the coupling.
Top

Im sorry to say that its a bad idea to drill out a 12 mm. There is a certain amount that a drill bit should take off to prevent it from angling, grabbing and twisting. This action either breaks the bit or your wrist.
Top

A conventional clamp-type flange-mount shaft collar would probably be the best item for the job. Otherwise you could set up a 90 degree jig that supports the shaft, heat up one of these 12mm couplers to orange and pound it onto the shaft, basically forge the hole wider. You only need about 6% expansion of the hole so it probably won't crack (though say goodbye to any finish and temper - if you're attaching it to plywood it should still be within spec though). Then use the motor to help sand the plywood face true - easier than getting the metal face flat.
Top

The 12 mm version is $4 with $3 shipping. I don't see how it gets any cheaper than that, unless someone gives you one for free.

I'd try drilling it out now that you have a drill press. Use cutting oil or the equivalent and take it slow, and make sure that your table is 90 degrees to your spindle.

Do you have to tap the side holes to put set screws in?

I don't know what size sanding disc you are going to use but I would be careful with the plywood after a certain size. It'll work, but not all plywoods are created the same. Make sure it is a quality high laminate product.
Top

I'm with ffj on this. I think you could still one of these larger as long as you can clamp it to the drill press table and there will be enough material left after the hole is bigger.

And now the conclusion ... 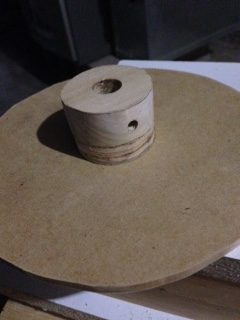 It mounts in a threaded hole via a set screw. I used my scroll saw (old-school 3D printer

) to cut the outer diameter of the wood. The inside hole is made with a drill press. The wood of choice is poplar which turns out to hold a thread quite well. Drill a #7 hole and follow it with a 1/4x20NC tap. Setscrews are available in quantity from Harbor freight. The mistake here was using only one setscrew and making the disc out of MDF. MDF sucks because it doesn't stay flat. So, ...

Here's version2 which did work. 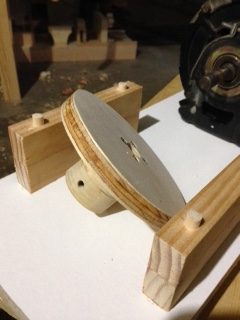 This one uses two 3/4 poplar discs and two setscrews. The disc is now made out of decent plywood. I drilled a hole through the plywood as well. This makes it possible to align everything with a dowel when gluing it together. I use four countersunk screws on the front because the disc will be under some torque. Since all holes where drilled on the drill press and the entire glue job is 3/4+3/4+1/2 thick, the disc is ~perpendicular to the shaft for government work.

And here's the resulting 4" disc sander. 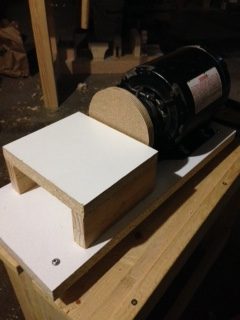 The top is removable so I can put other tops/jigs on/take the disc off and replace the sandpaper. The disc is just sandpaper that's tack sprayed onto the disc.

This project was entirely made out of scrap wood---mostly leftovers from last year's kitchen cabinets. I haven't gone wood shopping for 6+ months now. You might be able to tell from the glue job on the supports.
Top

Wow. Very nice. You probably cleaned up the wheel by running it agains some sanding blocks? I bet you can get it really true with some rough sandpaper glued to a 2x4 - kind of a poor man’s lathe.
Top

I've spent almost 8 years trying to perfect "roundness". First with a fret saw, then with a scroll saw, and finally by sanding them on this... 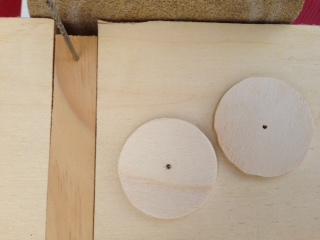 Presenting CircleJig1.0. It's almost magical but it generates a lot of fine dust, so I moved it outside. Compare the sanded disc on the left with the half-assed scroll sawed version on the right. (I can do better than that.) 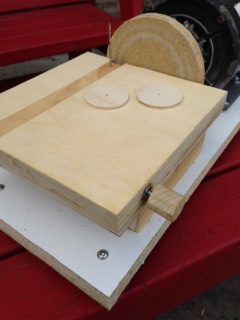 I looked at a bunch of different examples online and improved one of them. The wooden bar slides in the grove and you move it to set the radius of the disk. The bar is then locked by turning the knob on the side (that's the improvement). To hold the disc, I just drill a hole in the bar with the same drill bit that was used to make the hole in the disc and use it to hold the disc. Not sure this is the best idea though. 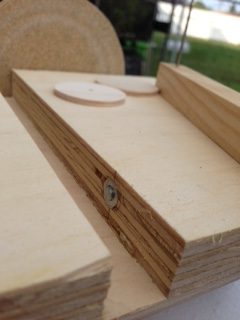 The locking mechanism is just a threaded rod going all the way through the top from the outside to the inside. (I had to drill in from both sides and meet in the middle.) I hammer in two nuts in a countersunk hole. The size of the ideal countersink depends on the softness of the wood, so do some trials first. I then thread the rod and only then do I superglue them in place. This aligns them and sets the distance to within one thread-width. If you glue them first, you might never be able to get the rod to thread. The knob is just a piece of wood that was threaded to the rod with a tap (probably not necessary) and then superglued as well.

Aside from that the jig is just two pieces of 3/4 plywood glued to a piece of 1/8 plywood. The bar is 3/4 pine. All glued together. This choice prevented having to cut the groove which is hard with hand tools and no plow plane.
Top

If you enjoy this kind of stuff, check out Shopnotes.

I used to subscribe to them and built quite a few jigs off of their plans. It was a great little magazine.

This youtube channel is owned by a luthier who makes his own workshop tools: https://www.youtube.com/c/PaosonLuthier/videos.

@jacob - that sanding disk setup is pretty good. All that matters is that is does the job and you're satisfied with results.
Top
Post Reply
12 posts • Page 1 of 1