Is frugality for the rich?

That is brillant.
Top

Just curious -- what's the source of the two "kinks" in the lines at about 60% and 84% frugality percentile?

I used it to reverse engineering my frugality/saving rate by taking my income percentile and years to 25x expenses.

I would also be curious how this would scatter plot with real income and real spending patterns.
Top

@LI - That's easy to visualize. Because both axes are percentiles of your requested variables, the median of the scatter plot is at 50,50 right in the middle. Then draw concentric circles out from the middle. If we assume that relative frugality and income are independent variables (probably doesn't hold at the very top and the very bottom) there would be equally many points in each concentric circle as they get bigger and bigger.
Top

It has been a long time since I looked at the data, but I think it has something to do with the average tax rate and savings rate and how they change at those percentiles. Or it could be an artifact resulting from how I processed or interpolated the data.

The entire “frugality percentile” dimension is not really correct because I calculated spending as a function of income, instead of deriving it from independent observations. It is valid to the extent that expenses are correlated to income. So what we have is a hack but it’s close enough since I care about insight, not precision.(*) At the time I made the original graph I was not aware of any pre-processed data source which reported spending deciles/percentiles as anything besides a function of income.

(*) This work was performed at a high-school level, not grad school. Though I did use my experience to eliminate the obvious errors.

The next step would be to use the BLS microdata to compute spending percentiles. Which I will attempt eventually. Working on more interesting (paid) projects at present. If someone can find or generate actual spending percentile data (2016 preferred), I’ll update the chart.
Top

Turns out JD Roth is also a data nerd!

Here’s his post on the latest US consumer expenditures survey:
https://www.getrichslowly.org/how-ameri ... /#more-838

I have BLS data from 2015 that actually breaks down the spending per number in household. Unfortunately, it's a PDF I saved, and for the life of me can't remember where I got it from. I just remember it was helpful for personal comparisons of single person households, I haven't run across too much data specific to that.

Anyway, to the point, in 2015 the mean spend for 1 person households was $33,508. It meshes with your method since the data is older. Either way, 1 Inflation adjusted jacob seems to have dropped from 25% (Jacobs claim from the book) to around 23%? Should we infer @jacob has become better at what he does? or that ERE may be less subject to inflation than a standard household? I hypothesise some of both, I guess only time will tell as we get more years of data points.
Top

classical_Liberal wrote: ↑
Tue Oct 01, 2019 12:41 pm
I have BLS data from 2015 that actually breaks down the spending per number in household. Unfortunately, it's a PDF I saved, and for the life of me can't remember where I got it from.

Thanks for giving me the data I just gave back to you.
Top

I was contemplating at this topic recently and I actually think it can be extended to a more generic one: is FIRE for the rich? (which was discussed before as well).

As it was shown in the graphs, high income is more "forgiving" for FIRE'ing, since income makes more impact than your spending habits. So I guess it boils down to discipline: if your income is not at least higher than median, you will need a lot of self-discipline. Not a lot people have it, and not everybody who has it has a clear picture in his head how to utilize it (majority of people live without any long-term plans), so we are left with few people who can and want to do it. The rest is not so lucky.

Higher income is easier, since you have much more room to play (and probably some "needs" are just "wants") and adjust your spending to match the same % of spending.

Take Jakob's article about minimum wage retirement. He laid out numbers perfectly, but people are mad because they can't do that! Hence all sorts of excuses. At that level you have no right for a mistake, and therefore people who make it (also, as noted in the article, a person with such personal skills won't spend long at minimum-wage job) are called just anecdotal experience, while majority can't make it.
Top

Using an undergrad level of effort to process the 2016 microdata, I calculated accurate spending percentiles and recomputed the time-to-FI chart. It looks much the same as the original, but the kinks have been fixed. 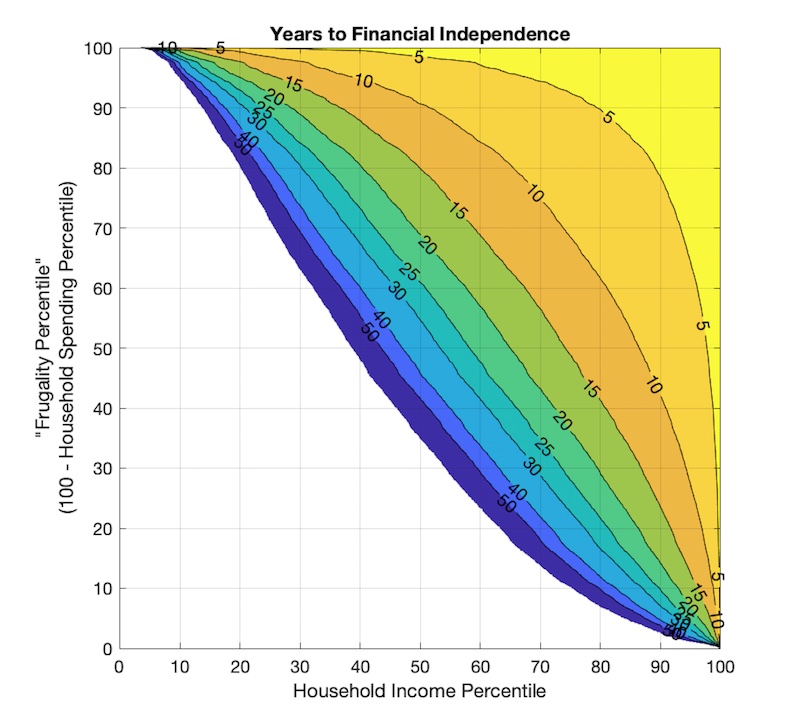 There will be interest in the spending percentile data, so they are presented below as a function of household size. I used “all households” to set the frugality percentiles for the colorful chart. 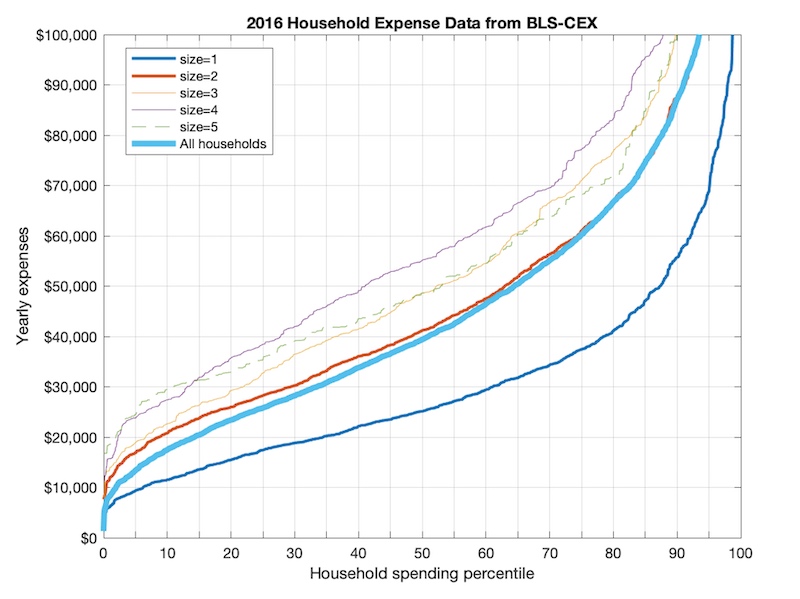 Maybe someone will be interested in reproducing these results one day, so here is the methodology. I used interview microdata in the FMLI files which have summary-level data. Spending is equal to total expenditures (TOTEXPPQ+TOTEXPCQ) minus SS/pension expenses (RETPENPQ+RETPENCQ). I threw out any household which did not report a full years’ worth of data between 2015Q3 and 2017Q1, for a sample size of N=4,068 households. Then I used the weighting variable FINLWT21 to correct for over- and underrepresentation in the data set so that it would reflect the general USA population and not just those that are able and willing to complete a BLS survey.

There is a lot of granularity in the microdata and the possibilities for analysis are unlimited. I mildly regret not having more time to play with the data, but I still prefer my day job.

Nice! The second chart also makes it clear that ERE (most of this forum) is in 1%/unicorn territory in terms of spending. With the definition of poverty limits and people supposedly living in poverty, the chart suggests that they pretty much don't exist. So are the data contingent on something else... like being part of "the system", not being homeless/living under the radar?

PS: I think you overestimate the average undergraduate.
Top

Design selection of households
The Consumer Expenditure Survey (CE) [...] includes people living in houses, condominiums, apartments, and group quarters such as college dormitories. It excludes military personnel living overseas or on base, nursing home residents, and people in prisons. The [survey demographic] represents more than 98 percent of the total U.S. population.

Consumer unit
A consumer unit comprises either: (1) all members of a particular household who are related [...]; (2) a person living alone [...] or living as a roomer in a private home or [...] a hotel or motel, but who is financially independent; or (3) two or more persons living together who use their income to make joint expenditure decisions.

Now I’m curious about the living arrangements of the frugal unicorns in the survey. My guess is that some may be college students who get prepaid tuition+room+board from their parents. The microdata will tell us.
Top

Very cool. The consumer unit definition is interesting. As a Lentil Baby, I fall into gray zone between "living as financially independent roomer in a private home" and "living together using income to make joint financial decisions." I know that Jacob does not like the strategy of "living off the waste stream of affluence", but there are so many middle-aged men with extra space in their domiciles it seems like just a pointless gesture to choose to live in my Smart car/tent or some $300/month Golden Girls/Hot-for-Cleveland arrangement instead. Clearly, providing myself with enough heat in the tent would contribute more to future planetary climate change than snuggling with some affluent old guy in a space he would pay to heat even if I was not there.
Top

Technically I like it, but I don't like that it doesn't scale. Of course not everything has to scale. Indeed, a system of everybody doing the same thing wouldn't be a system. One just have to be careful not to become a niche-player.

One example of a waste stream that doesn't scale are cars running on biodiesel from restaurants. There are only so many restaurants cf. potentially many more people doing conversions. Another example is the drop-shipping strategy from the 4HWW as everybody eventually competes on the same platform.
Top

What’s your definition of scale?

If everyone lived at 1 JAFI (I think that’s the acronym?) then most businesses (some of which you may own, I know I do) wouldn’t have a business. Just playing devils advocate...
Top

One third of produced food ending in waste, catching some of it is a quite scallable strategy.
Top

Been there, done that, see http://earlyretirementextreme.com/what- ... -less.html ... current business plans don't scale but the concepts of business and investing in businesses do scale.

Personal food waste also scales quite well (being rich and increasing frugality) but other people's food waste not so much(*). I don't know the ratios, but my guess is that most food waste happens in the production chain before the food makes it to the supermarkets and after it makes it off of the dinner plates in residential homes and ends up as domestic garbage---meaning essentially that dumpster diving is not going to feed all that many people.

Thus, I file this in the restaurant sourced biodiesel category?!

(*) And certainly not in the direction of other capital dimensions. I won't be able to sell my food waste (at least not for very much at all) nor will I be able to pay my taxes with food waste. Trading it for other favors is probably the closest possible, but given its form, the buyer would have to be pretty desperate to stick around for my possible leftovers.

From personal experience, living in the waste stream was a lot easier in the rather wasteful environment of NorCal's Silicon Valley and much harder in Chicago where there's so much competition for the waste that one technically have to have a business license if one goes beyond the hobby stage of "recovery".
Top