I appreciate etiquette as a subject--did cotillion as a middle schooler,, have been to countless social etiquette/networking events through law school and BigLaw firm life, we regularly host and are hosted as that is much preferable to "going out"--and I will certainly be on the look out for an older edition of the Emily Post book mentioned above, as that would be a fantastic edition to the library.

A topic that would be interesting to investigate further, however, would be where the concept of etiquette came from. I wonder if this is yet another thing we have to study via some outsourced resource (like Emily Post's treatise or like the consultants my old law firm paid to come in and train up new associates) that in earlier times--when people were less mobile and cultures, sub cultures, and sub-sub cultures didn't mix much--would sort of be like asking a pre-modern person to define "religion."

Honestly, these days I spend most of my time socially with family and with people I've known since middle school, and whatever "etiquette" I learned in cotillion wrt place settings and how to ask a girl to do the fox trot or whatever is wholly irrelevant to the actual rules of etiquette that a Tocqueville/Herodotus/Marco Polo outsider might discern from observing how my people behave socially in reality. 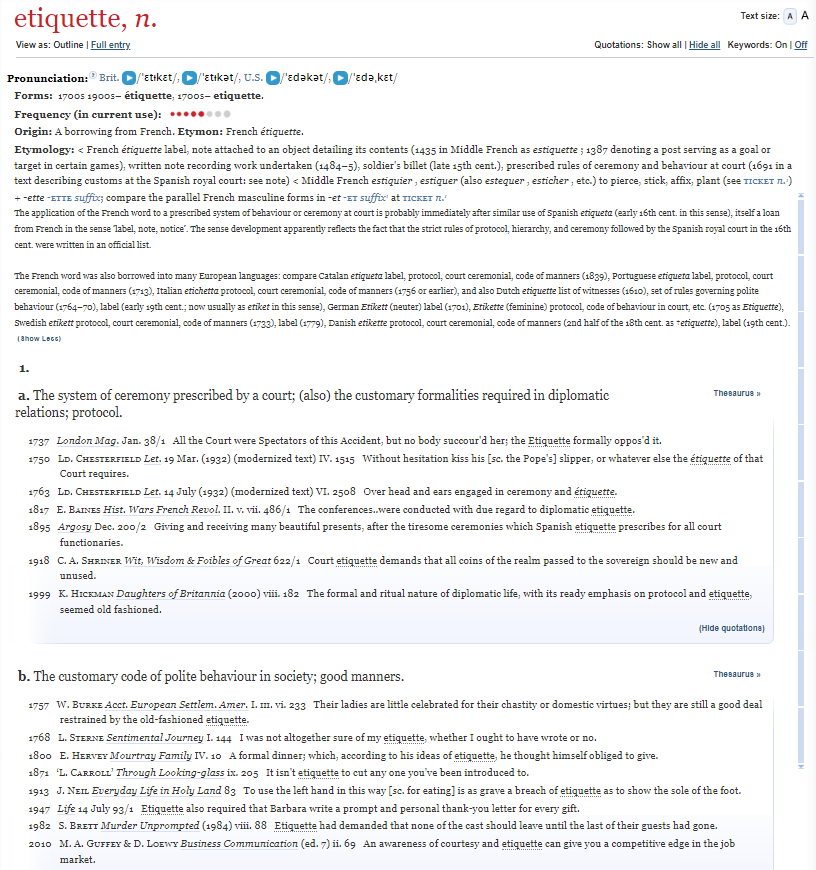 There are several others further down, including as an unwritten code of conduct followed by members of certain professions, esp. medicine and law. But none of the entries predate 1737.
Top

7Wannabe5 wrote: ↑
Wed Jan 11, 2023 2:23 pm
... try to think of something true and complimentary to say about a home or similar environment you have been invited to for the first time.

That's a good one.


For those wondering why this etiquette thing may be a good idea, see this post on how and why to be ladylike (for women with autism): https://sympatheticopposition.substack. ... -for-women

The Art of Manliness is also an excellent resource https://www.artofmanliness.com/
Top

What's interesting about etiquette is that it exists through all stratas of society. We think of Emily Post and whether we can rip apart bread or whether we should cut it before buttering it. But it's relative. There was an episode in The Wire that addressed the tradition that gang violence was not to take place on Sundays. However, a hit was ordered on Omar which resulted in his mother's church hat (a.k.a her crown) being blown off by a stray bullet. Here was this stone cold gangsta who made his living carrying a sawed of shotgun in order to rob drug dealers losing his mind because gangster etiquette was broken. And of course we all know what happens to child abusers in prison. The popularity of Larry David in Curb Your Enthusiasm is because of his disregard for basic etiquette and how we could live vicariously through it i.e. getting into fights over handicap stalls in bathrooms. And without getting political, much of the animosity against Donald Trump was based on his basic disregard of etiquette. I think it reminded people that when it comes to holding a society together, when it comes down to it, basic etiquette is probably more important than rule of law.
Top

Yes! Post-COVID communal slippers are rather off-putting, so lending a clean pair of socks is an option. I find us no longer inviting people (more outer-circle) who require us to provide footwear, also a post-COVID thing.
Top

A lifetime's worth to unpack here; good stuff.

If I saw an Emily Post type character sitting around at one of our shrimp boils or fish fries observing and taking notes so that she could write a blog post or substack or something about "the ways and mannerisms of the coastal redneck," I'd politely ask her to leave and to throw her written notes in the trash on the way out, and if she refused I'd call her out until tribal pressure and chastisement forced her hand. If that Emily Post type character turned out to not be an outsider, but a member of our own tribe, I'd follow the procedure of Matthew 18:15-17. The outsider Emily Post is a voyeur; the insider Emily Post is someone seeking to exploit her own people and their institutions, and by doing so to ultimately to cause its dilution and eventual collapse.

Half-formed thoughts, for sure; but is not "etiquette" really a form of dishonesty at some level? You must study manners that are foreign to your own in order to mimic them and thereby pass yourself off as one of those foreigners; simultaneously betraying the manners of your own people and exploiting and abusing those of the foreigner.

Is "etiquette" not just LARPing?

I'm reminded of my/our reading of Moby Dick. Ishmael spends chapters and chapters explaining the ways and manners of whalemen and the various peoples and places he encounters on his adventure. But this is because Ishmael ISN'T a whaleman; he isn't a Nantucketer; etc. He's a LARPer.
Top

@Hristo Botev, in that vein, how is studying etiquette any different than studying grammar or a foreign language? Your kids presumably learned language from yourself and their peers, what use is anything in the world beyond the tribe?

Is the purpose of etiquette simply a shibboleth to enforce class and tribe, or is it a way to communicate within the norms of that group?

Are deception and evasion not critical life skills for children to learn, while the stakes are low?
Top

Hristo Botev wrote: ↑
Fri Jan 13, 2023 9:41 am
Half-formed thoughts, for sure; but is not "etiquette" really a form of dishonesty at some level? You must study manners that are foreign to your own in order to mimic them and thereby pass yourself off as one of those foreigners; simultaneously betraying the manners of your own people and exploiting and abusing those of the foreigner.

Is "etiquette" not just LARPing?

Yes and no. Kegan to the rescue. It depends on whether someone IS-etiquette or HAS-etiquette. The former comes about after being told there are certain correct ways to behave. It allows people to become part of the group that abides the etiquette. It's the ticket to the group so to speak. Learning it is the cost of joining. Someone who IS-etiquette is likely to be personally offended by breaching that etiquette. They'll also feel bad or wrong by breaching it. They've formed their morality around the etiquette.

@basuragomi, I like that way of looking at it: etiquette as another form of communication (I'm sure I'm butchering your point), which it of course is. A related discussion came up during my Thucydides seminar, when the topic of the credibility and/or historicity of Thucydides' practice of quoting pages-long speeches as if by transcription, which obviously they could not have been, or at least most of them could not have been. And the question came up as to whether these speeches could be relied upon as accurate accounts if they are not true transcriptions. But I deal with transcripts for a living and can attest to the fact that a deposition or hearing transcript most certainly does not accurately reflect everything that happens, and often a transcript can be less accurate than someone else's in-person summary would have been--i.e., who is to say that Thucydides' narrative retelling/summary isn't in fact MORE accurate than a scribe's word-for-word transcription would have been? And body language et al. of course plays into this, but I imagine "etiquette" does as well--you can communicate a lot by putting your feet up on a conference room table, choosing not to take your suit coat off despite an overheated deposition room, never looking a deponent in the eye when asking questions--none of which would be reflected in a transcript and which are more in the realm of what is conveyed when a person follows etiquette or doesn't follow etiquette, and if the latter whether they are not following etiquette as a strategic move or because they are ignorant as to what is and not generally deemed acceptable in a certain situation.

Anyway, I of course teach my kids etiquette as I also teach them grammar and the like. And I do that as their father. But that doesn't get to the religion point I made earlier: a pre-modern father would have taught his kids "religion," but religion as a secularized concept would have been largely unfamiliar to him (I'm supposing, I don't really know). Seems the analogy holds with respect to the "secularization" of etiquette--this is just how we are and who we are and how we act; to study someone else's etiquette and to try and mimic it in order to "fit in" or whatever is a form of deceit.

@jacob, as usual, you are speaking on a different plane beyond the one I live on (I'm just a caveman, after all:)). But if I'm understanding the kernel of what you are conveying, it seems to jive, I just think the rub (as always) comes in defining and distinguishing "our" group from "other" groups. Also, do we exist outside of our etiquette? Is there in fact no such thing as "IS-etiquette" that can be separate from the person/ego; there is only ego which is defined by, among other things, that "IS-etiquette." And any attempt to try on for size someone else's etiquette, and be HAS-etiquette if I'm grokking you, is to "be" something that one is not.
Top

I had the unfortunate experience of being forced to have dinner at a private table in the back of a restaurant with a someone connected to costra nostra. The display of etiquette would have brought Emily Post to multiple, albeit silent, orgasms. It made me piss my pants.
Top

Talking about money or personal finances is also generally considered to be poor etiquette. In fact, the transfer of self-help-circle behavior of "being transparent" about any otherwise considered to be personal matter to general etiquette-ruled realm of social interaction is likely to be problematic. As in, why AA is anonymous, etc. IMO, this may also serve to be a significant barrier between ERE (the book/the forum) and ERE2 (any generalized, in person, open access version of the former.)
Top

Anonymous groups are interesting when it comes to etiquette as they really are not anonymous because as we learned early on its a small world after all. It's really a social contract agreeing to secrecy. A type of omertà. An agreement that if you see someone you know through an anonymous group in another setting you will not talk about "this thing of our's." Or if someone confesses to a crime for which they have not been caught/punished, you will not report it (although there have been incidences of reporting). Which is funny because when you put a bunch of recovering crackheads in a room, a perverse game of one-upmanship develops. It's basically "You are not an addict until you have..." and many of the dot dot dots are criminal in nature. A run of the mill cokehead can really develop a sense of inferiority if they never sucked off a corner boy or stolen their grandmother's entertainment center to get high. It's similar to someone entering a room of ERE people with an embarrassingly inadequate SWR. It's why I have come to the conclusion that status is not a social construct but is a genetic trait of human beings because I have never been exposed to any social interaction in which It is not playing in the background. Wherever there are people there is status and wherever there is status there is etiquette.
Top
Post Reply
31 posts