the Matrix (is) a modular three-dimensional unit called the Living Structure that he created in 1949 while studying at Bradley University, and later perfected in 1954 while a graduate student at the Cranbrook Academy of Art. The Living Structure, with its integrated furniture and spindly, grid-like structure, was designed to liberate inhabitants from the postwar glut of expansion and consumption by recalibrating the way space was used, allowing for a bedroom, living room, and personal office to coexist in a single architectural frame. By making the design simple enough that it could be built by hand in an afternoon, Isaacs sought also to deliver the Living Structure inhabitant from the pressures of consumerism and rewire them for hardy self-sufficiency. “Every new acquisition just loads us down with more obligations and expenses in time and productive effort,” he would later write in 1974’s Living Structures. “It’s become evident that this is a crusher, leaving little time for inventive work and the individual search for peace of mind.”

...where he would spend the next decade developing more environmentally conscious applications of his Matrix philosophy. The resulting Microhouses were his largest creations yet: freestanding grid-based structures that rejected what Snodgrass calls “modernism’s penchant for permanence and monumentality” in favor of mobility and flexibility. 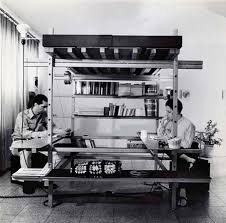 Cool article. These structures remind me of various projects outlined in Design Like You Give A Damn: https://www.goodreads.com/book/show/441 ... ive_a_Damn
Top

Somewhat similar (but will take more time than one afternoon to assemble) modern version by Dr Page from the University of Hertfordshire.
Top

Ken isaacs, Nomadic furniture, and other simple modular building systems are something I want to spend a few years playing with when I actually have any space to put large toys / a workspace or decent yard for building stuff. Average houses have always baffled me in why some things are normal (sink, couch, stairs, doors) but other things don't exist in them normally (hammock floor, monkey bars, slides). My hot take is that modernity warped the fun out of living because it wasn't efficient / it was less safe. You can tell because almost any child would choose the fun house over the "normal modern house". Who wouldn't want to take the slide to downstairs to grab your coffee in the morning instead of the stairs?
Top

Your friendly local building inspector would like to have a word with you regarding the building code.
Top
Post Reply
5 posts • Page 1 of 1