Yeah... Illinois.... Sounds like moving to MN is a good idea.

If you were staying in the Quad Cities, I think it seems the Iowa side is significantly nicer, but, I've spent most of my time there over on the Iowa side (many visits for work, and lived there as a child).

Maybe one potential issue is, if you go buy your 'forever' house in Minnesota, is there a chance you'll change jobs before retirement and have to relocate?
Top

Iowa side is nicer, but taxes are just as bad over there. They have higher rates, and almost the same deduction amount as Illinois. Property taxes tend to be lower though.

Losing this job would suck big time, because it's a great job. I think the chances are fairly low at this time though, mostly because we are really busy and I seem to be well liked by the right people. If my current assignment had to let me go for any reason, the consulting firm has a lot of work lined up currently that they'd put me on. The company is only about 1.5 years old and made 1.1 million last year and on track for 2.5 million this year. We're up to about 30 employees now from about 10 when I started. We are doing really well.

I think I'd stick to remote jobs until I retired though, there is a fairly solid market for remote positions in tech work. I might have to travel a bit, but it would be a job. I've gotten spoiled on this type of work.

I dont really know much about the quad cities - I just looked them up. But I have been totally amazed by your savings rate and the price you paid for your house. I live in an absolutely spectacular city but its also extremely expensive and pay is not high like San Fran or NYC or Switzerland. So its very hard to become FI here. So I guess there might be quite a trade off between cheap places to live and how nice the city is. But it seems like you and your wife seem to have a really nice homesteading lifestyle which I somewhat envy.

Have you thought about just renting instead of buying? At least for a while? Why do you feel the need to buy? Do you think you might end up moving again from the next place? It seems maybe to make more sense to rent rather than buy if you dont know you have found your lifelong home town/city - unless it makes you richer from buying than renting when crunching the numbers.
Top

People in the midwest don't even know what the Quad Cities are.

It's definitely a cheap area to live if you pick your location carefully. When we bought the place, we had no money and only bought it because it had land and we wanted a garden. Ha!

I don't know if I could go back to renting actually. Being able to do what I want to my house or land is a nice feeling.

I actually forgot to mention above, but we also want to be kinda strict with how much land we get with the house. We don't want more than what we have now, but would like to be able to homestead, so something between 0.5 and 1.5 acres is ideal. Having a ton of garden space with chickens is awesome.

We seem to be settling into a 5-10 year span of time before we might need change, having lived here for 7 years now.
Top

Oh cool. Sounds like you want to carry on homesteading so I understand! I will watch with anticipation from the confines of my tiny little box inside a high rise that I pay a fortune in rent for !

Yes. Actually what we want to do is to hire a dozen helicopters and pick up our entire house and 1.5 acre and just set it down up in MN.

Did I miss something? Are you quitting your new job to move to Minnesota and living off of your investments?
Top

No, not quitting the job. We're about half way to FI. We want to move to MN, yes, but just not sure when. As of now, there isn't anything in the area we'd like within a good price range. We'll likely be FI before we find anything we actually like enough to buy, but who knows.
Top

Congratulations to you cmonkey! You are half way there. Keep on saving, (but celebrate a little

If I read things correctly you went up 10K in two months in a volatile market. Nice job.
Top

@Jason and @wolf, thanks guys. Of course, now we are back under 200K a few K. Thanks volatility!

It's nice to have crossed it. Another couple months and we'll be over for good.

We spent 2 weeks in MN with family during April. We had a wedding to go to, but an historic April blizzard closed all of southern MN for that weekend, so we made the trip for almost nothing. It was nice being back up there though. We looked at one house, but it definitely wasn't for us.

Finances were very good, slightly lower than April 2017, so our TTM dropped slightly. This will drop more in the next 6 months.

Our Expense to Income numbers are getting closer and closer to overlapping for the first time. I feel like this will happen in 2018, but not until December. My big dividend months are March, June, September and December and I have home insurance/tax payments in all those months except December, so my expenses are higher than the average. My "month 3" number is now $752, and will grow by a lot before December.

Garden Photos at the bottom!!!

Finally, both of us have been busy busy busy having fun outside. It was a very long winter/late spring here in the midwest. We didn't get regular temps above 40F until 2 weeks ago in mid-April. The greenhouse is packed! I built a second bench and have some more changes planned. 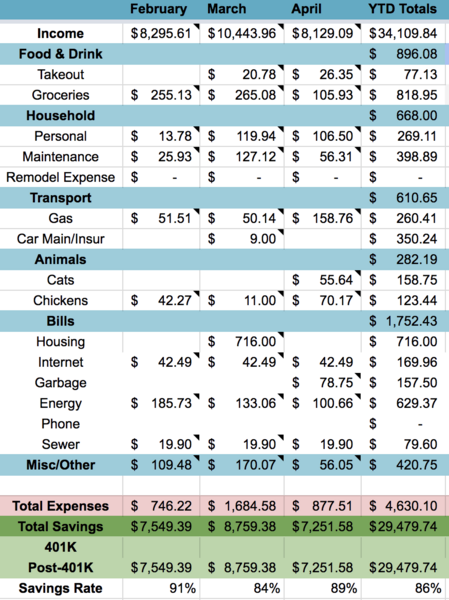 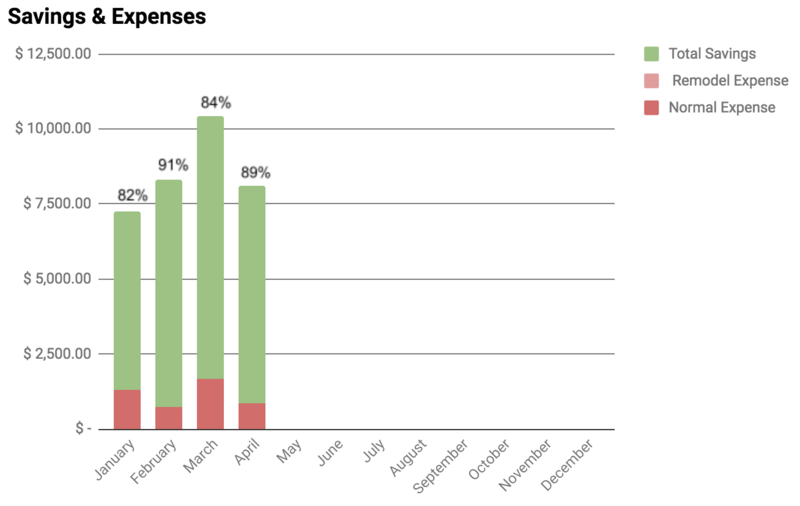 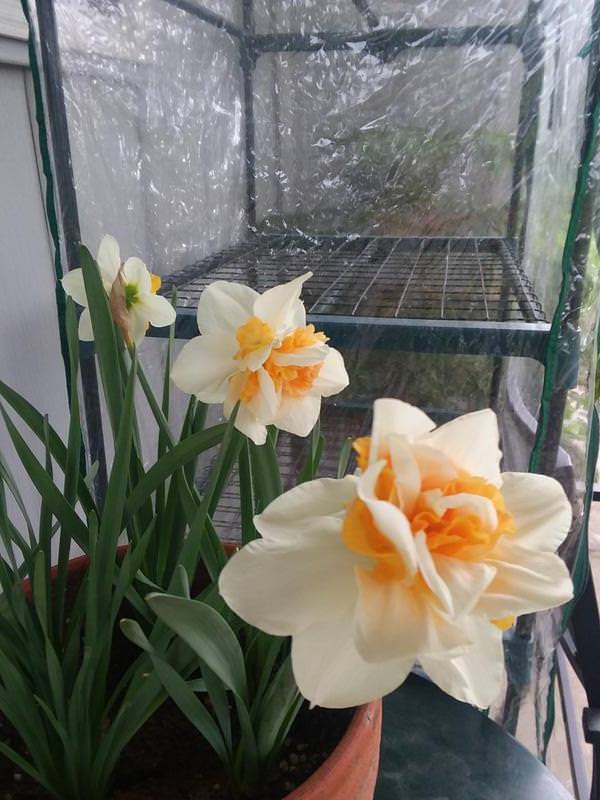 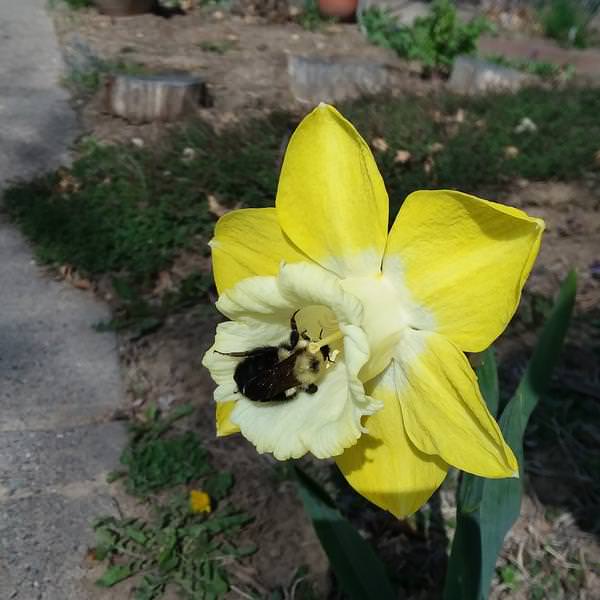 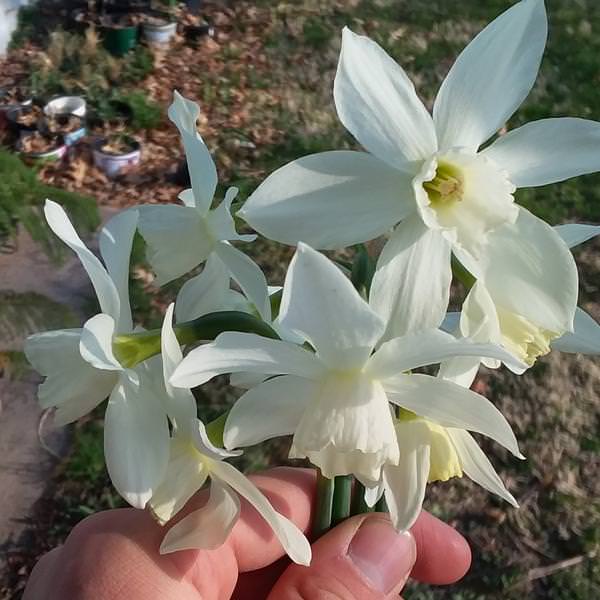 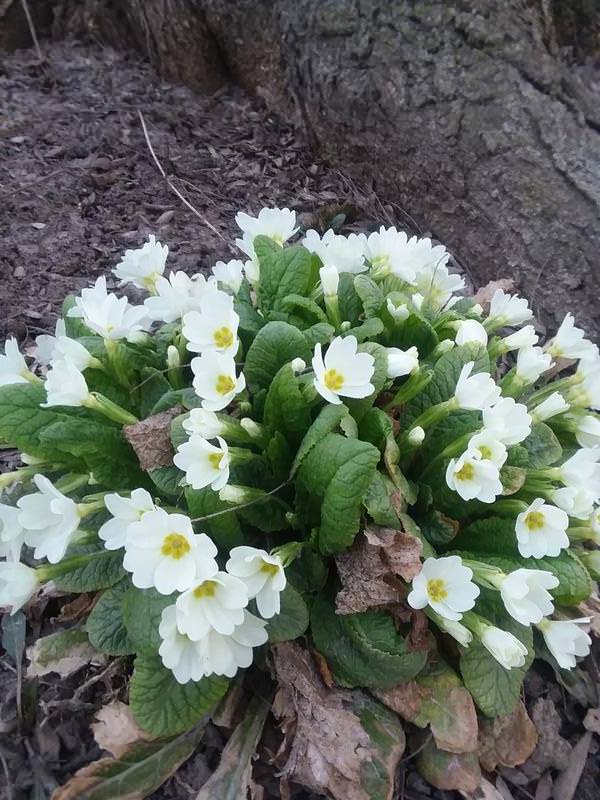 The past couple of years I have thrown most of my grass clipping and oak leaves in my chicken run. Going forward, I'm putting ALL of it in there each year.

Well here is the result! They compost better than I do. I was able to cover 3 garden beds at 2-4 inches deep. Probably about 200 square feet. The soil in our beds is getting pretty good because I've put down organic matter on a lot of them. 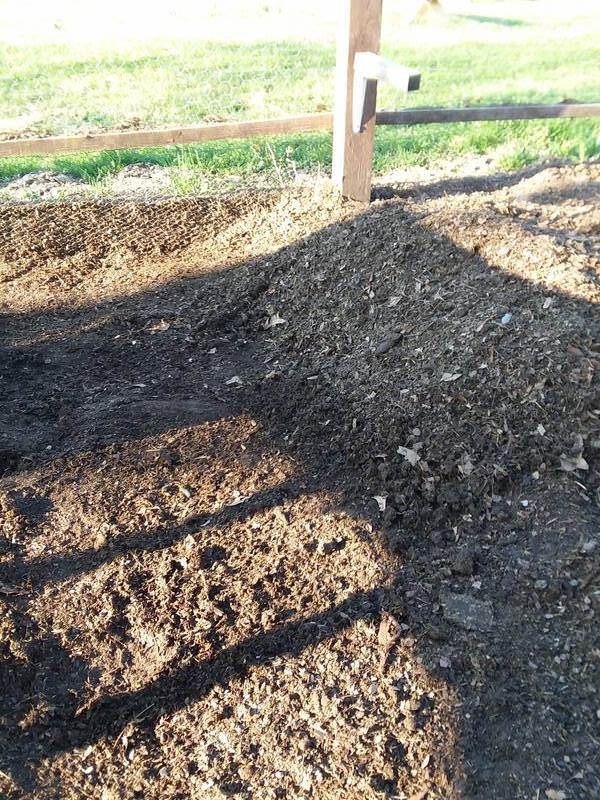 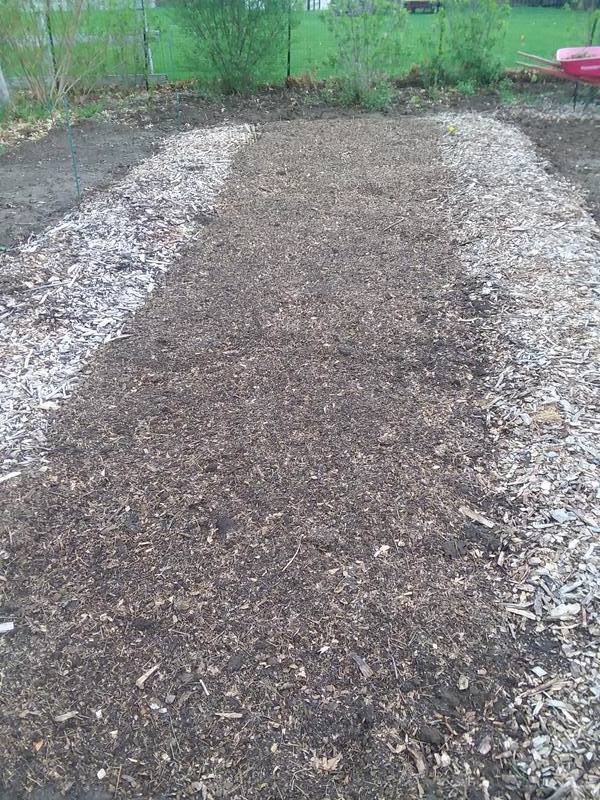 The mulchers! We still get but loads of eggs. We give them to family and sell them at our garden club. And eat a lot of them. 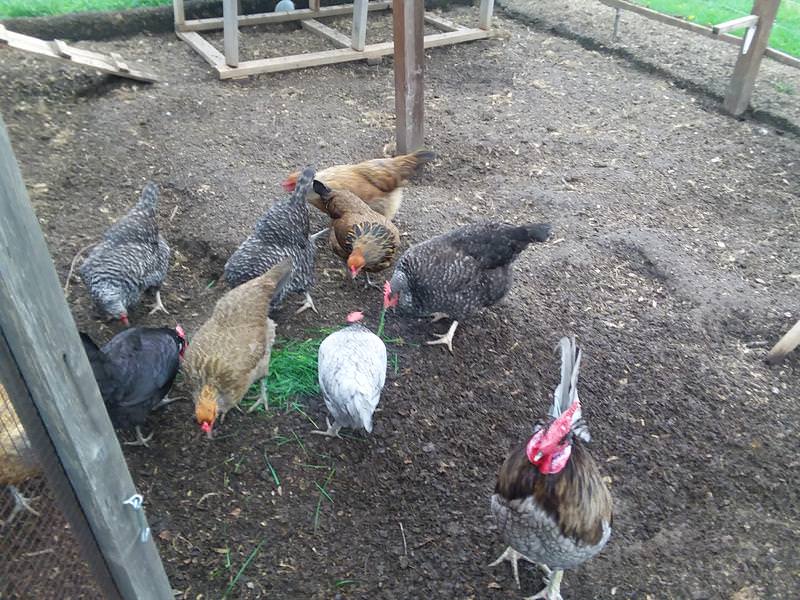 DW has espaliered a couple of old variety apple trees in front of the coop. They are coming along nicely. 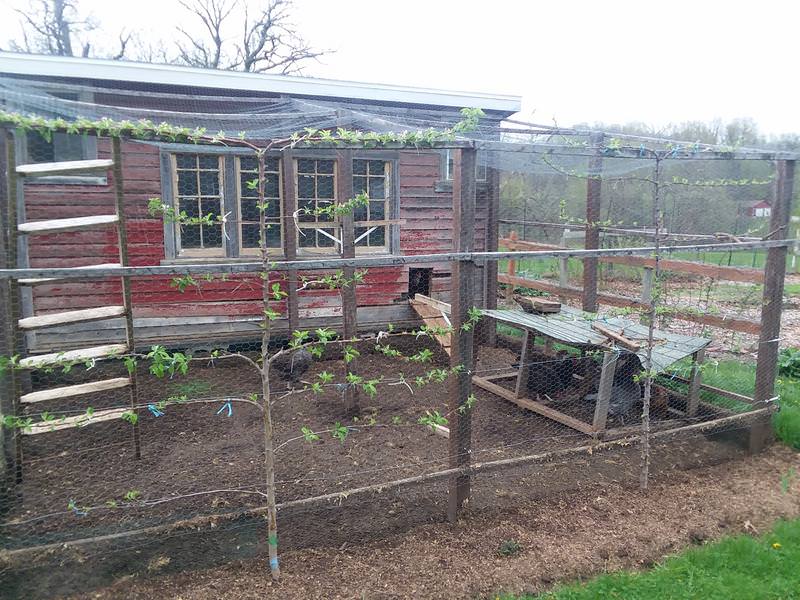 I've learned a lot about what works and what doesn't when it comes to mulching over the past year. We have huge VOLE problems where we live. Anywhere that is undisturbed and has ground cover quickly becomes infested. This past winter a large chunk of our largest hostas were 90% eaten because they were covered by leaf litter that I didn't clean up.

Last year, I mulched a lot with grass clippings and the voles moved right in as well. So this year all the grass clippings are being composted by the chickens, because they don't work well in the compost bin either.

Wood chips don't work in annual beds! Don't do it! I don't think they tie up nitrogen so much as people think but they make it IMPOSSIBLE to do anything with vegetables. So they are confined to the paths, the hedges, fruit trees and the fruit garden.

The ONLY thing that I will mulch with on flowers and veg beds is finished compost and finished leaf mould. Also, no deeper than 4 inches because then the voles cannot tunnel under the mulch. They have to make entry holes, at which point I can destroy their tunnels and they leave.

The key to vole management is -

1. NO ground cover
2. Keep everything 'disturbed', meaning work the beds from time to time. Vole hate being disturbed and leave very quickly.

I love the idea of no-dig, but it just doesn't work for us for the most part. I am not turning soil over anymore, but I do disturb the top 2-3 inches.


So here is what our beds look like now. I love them. 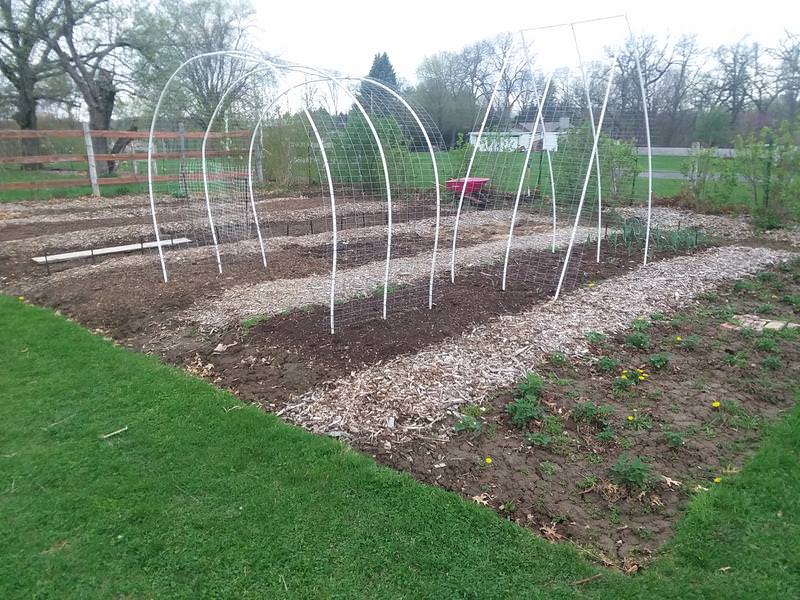 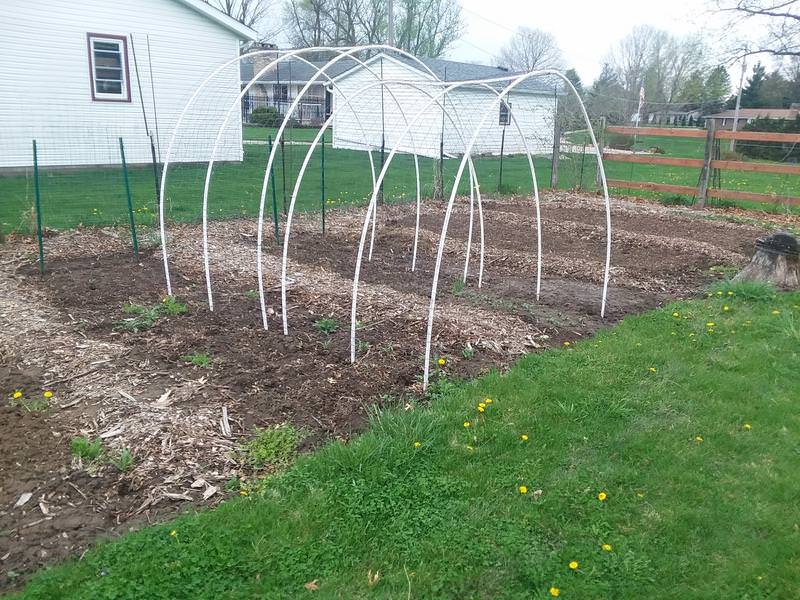 I finally have our fruit garden cleaned up after about 3 years of always falling behind. It just needs some more free woodchips. Working from home has given me so much more time! 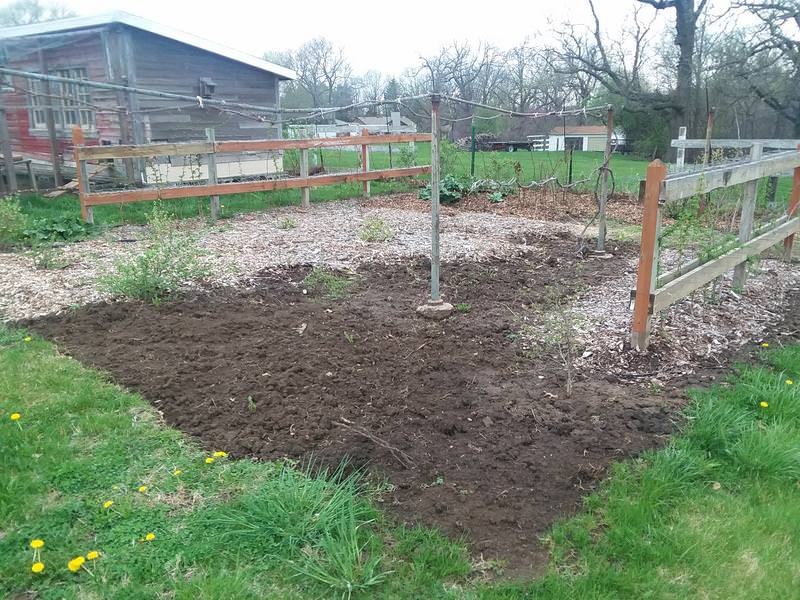 I'm a bit behind on my composting operation. I bought a chipper/shredder on craiglist for $100 bucks and will be using it to shred this stuff. 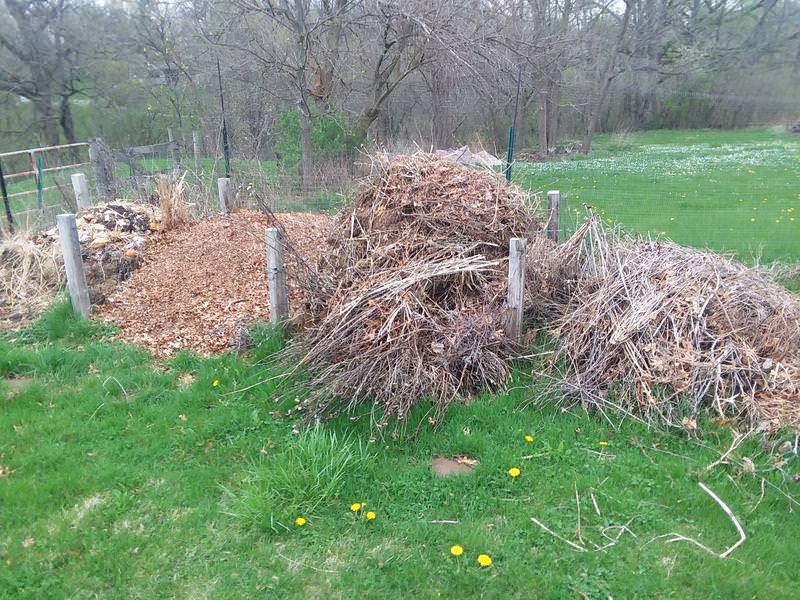 I have so many flowers in my orchard and I don't even need to tend them! They just keep coming back. 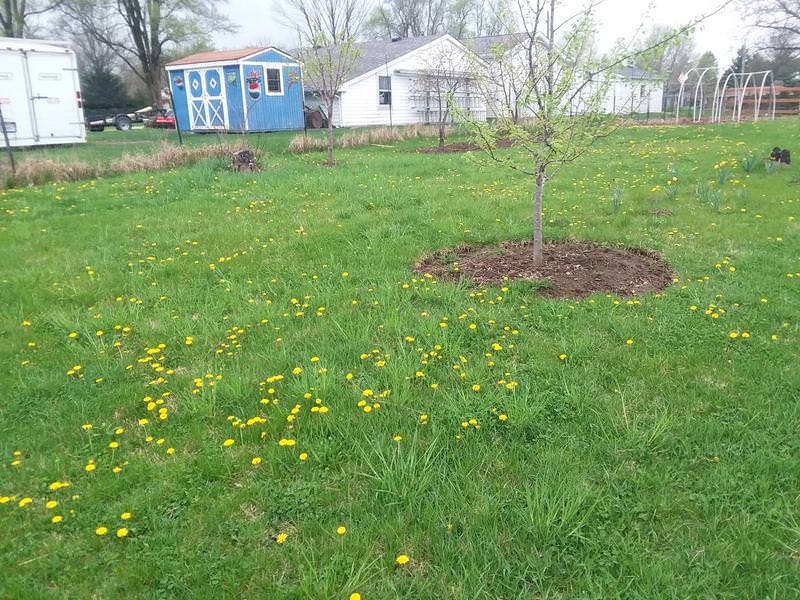 My second bench. It has helped tremendously and I need to get another built for the other side. I'm also going to build a small plywood cabinet for storing pots, labels, tools, etc... 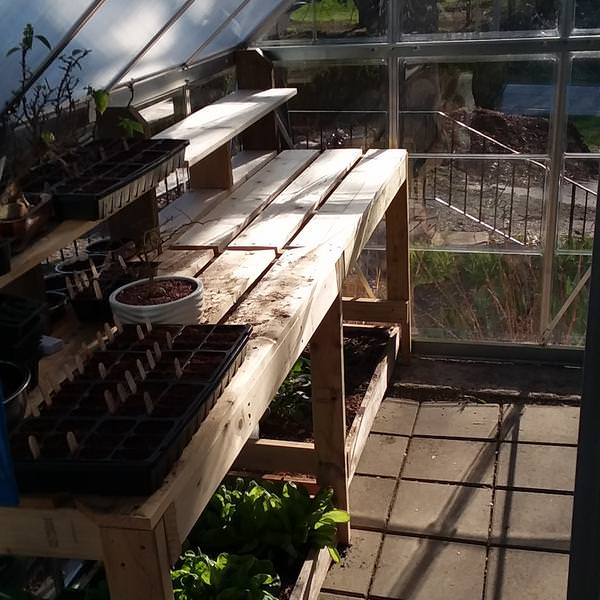 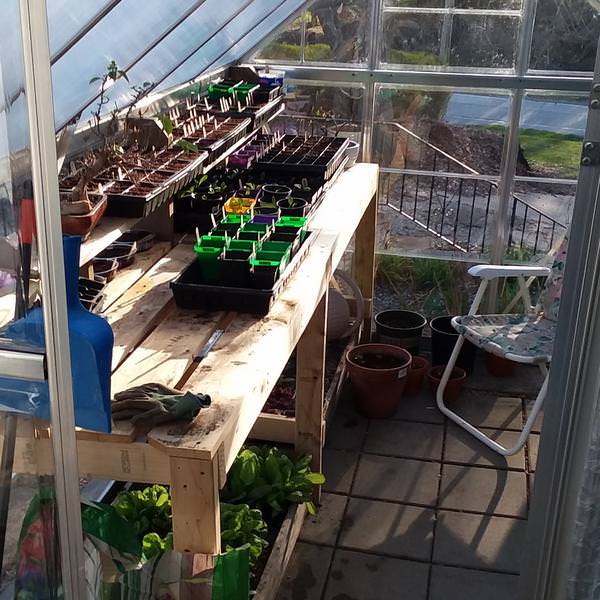 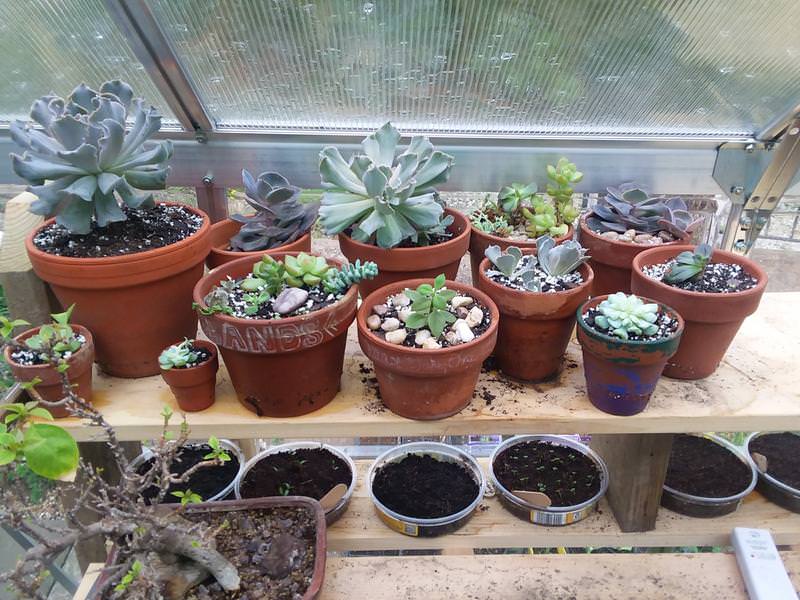 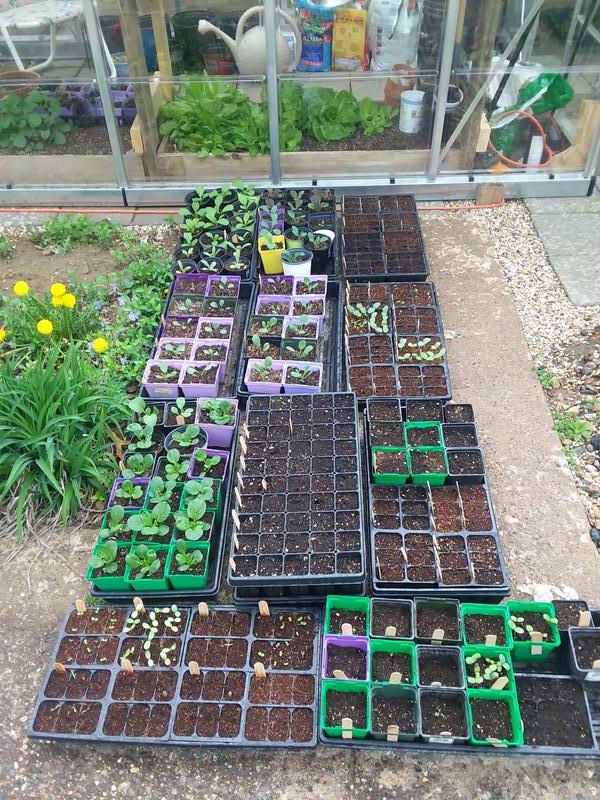 As you can see, we go overboard. But we find room for everything! Growing in the greenhouse is going extremely well compared to kitchen growing. No fungus gnat issues yet! We saw a few today and so set everything outside so the wind will blow them away.
Top

The mulchers! We still get but loads of eggs. We give them to family and sell them at our garden club. And eat a lot of them.

I never realized how varied chickens can look. I am assuming the red head with the blow dry staring straight into the camera is the hen.
Top

They are supposed to inspire.

I don't think my gardens are so great most of the time but it's probably because I see them every day.

@Jason, I'm guessing you are talking about the one on the bottom right? I'm pretty sure he'd kick you for calling him a hen.

After we came home from MN, he kicked me every time I went to get eggs. Gotta move sloooooow.
Top

At least he didn't call him a chicken!

I strongly suspect I made a mistake by building 4x4 raised beds (still 10) on the lawn instead of just razing one big block of the lawn. Raised beds make it hard to weed (internally) and I have to weed whack around them (externally) because the lawnmower doesn't cut close enough.

PS: Dandelions mixed with old newspaper make for great worm compost food. I learned that worms produce a lot better if some effort is pent on the carbon/nitrogen balance.
Top

So its a rooster?
Top

jacob wrote: ↑
Fri May 04, 2018 1:39 pm
I strongly suspect I made a mistake by building 4x4 raised beds (still 10) on the lawn instead of just razing one big block of the lawn. Raised beds make it hard to weed (internally) and I have to weed whack around them (externally) because the lawnmower doesn't cut close enough.

PS: Dandelions mixed with old newspaper make for great worm compost food. I learned that worms produce a lot better if some effort is pent on the carbon/nitrogen balance.

Dandelions are awesome. I love them. I let them seed on purpose so I will have more. Great for early bees and other pollinators.

Raised beds are alright, but I find the whole process of building them, filling with soil and eventually having to dig out some old soil and replace with new to be too much work. You also don't have native biologics in the trucked in soil (unless it's topsoil).
Top

Looking nice. I planted 55 tomato plants the other day, God help me if they all live.