Have you been able to find professional support for your girlfriend's mental health stuff? My wife has been using one during this time, and she has been a big help. It took a couple tries to find a person that clicked.
Top

Thanks @Scott 2, feels pretty good. I'm a bit ahead of schedule on salary projections, so my plan is to learn data structures, then practice data structure intensive algorithms, and maybe even build personal projects in tech stacks that match some of the big companies. Hopefully with some LinkedIn networking + more applying over next 6 months, I can land something around $140,000 salary.

GF is all taken care of in that regards, and doing better as time goes on. Just a lot happened from Christmas to this point, with pandemic stress on top of that. 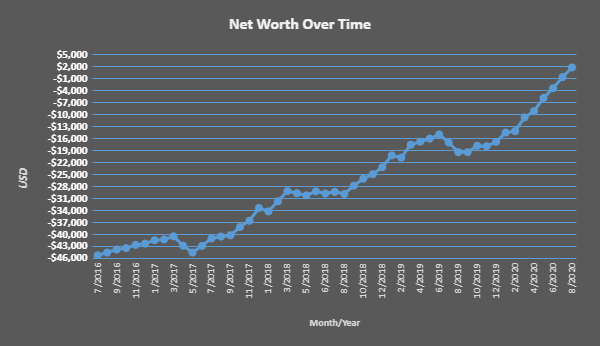 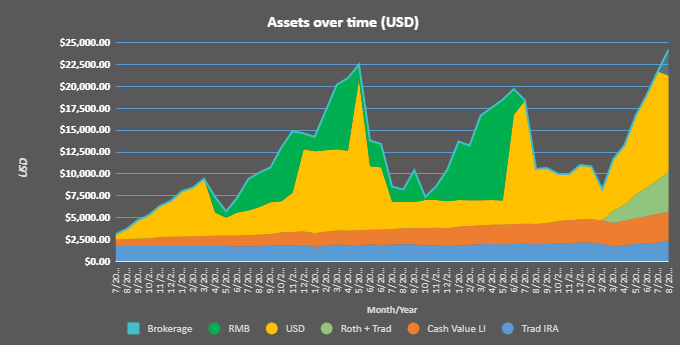 Added brokerage account. I'm a little too heavy in bonds and perm LI, think I can take more risk. Also needs to fund my HSA.
Top

Oh man, as someone who has been closely following your journey for years, this was awesome to see. Onward and upward!
Top

Wow dude, you are killing it! What, has it even been a year since you were in China yet? Good job with everything.
Top

Hey, you blew right past the part where we can joke about being worthless. Congrats!

If your goal is faang tier companies, I think there is a very specific set of interview skills you need to level, that are largely unrelated to your technical competency. It is not a path I've pursued, but you might not even need the data structure stuff.

Chicago also has finance/trading companies that pay well. Citadel certainly stands out, though I don't know what work life is like.
Top

hey Viktor, I've been reading through your journal over the past couple of days. You've given me a lot to think about, you've got a really interesting perspective on work and life in general. It's been amazing to read through the couple of years of progress and see your personal and financial evolution.

I'm a fellow US citizen and I moved north of the border a few years ago. I'm PR right now, and will eventually become a citizen. Happy to talk through my PR application experience if you want. Toronto and the Greater Toronto Area (GTA) is ridiculously expensive - I think Ontario is overpriced in general, but there are a lot of job options. I know Montreal has a robust tech scene and is less expensive than Toronto or Vancouver. There are lots of options to explore. The border being closed will be an issue for awhile, but it doesn't sound like you're in a rush to make a move just yet.

Keep up the amazing journal! Thanks again for all the effort you've put in to sharing your thoughts with us

Haha thanks everyone. Some of you we've been following eachother's stories for some time now.

A little over one year @cheepnis, but it feels like less. <1 year since my girlfriend has been here with me still, she's got her '1 year back in the US' coming up soon.

lol @Scott 2. Ya that's kind of what I was referring to. There's a lot of info about what those companies look for in interviews. I feel like if I focus on that, I would have a good chance of success. I'm trying to avoid too much of a WLB sacrifice though.

thanks @_bb_. And ya I think Canada would suit us pretty well too. 1 thing I still don't quite understand, is if I can get PR JUST for being in-demand labor, or does it have the "at a Canadian company" rider tied to it? But short-term we're more likely to make a close move from Chicago. I think international might be more of the long-stay vacation variety in the short-term.
Top

I lost a friend recently. Last friend I lost was while I was abroad in 2015 in the middle of nowhere in China. It's probably the worst feeling. I had a little epiphany how everyone you know will either lose you at one point or you will lose them. That's pretty depressing.

The biggest sacrifice you make living abroad, leaving your hometown, whatever it is. You miss out on things. Christmases, crazy Saturday night stories, reunions. Funerals and weddings.

You get a lot in return, but that's the biggest sacrifice.

We've been talking about moving right, because we aren't super happy where we are. But with the places we've been considering, we've been leaving out my hometown, for the most part, even though it checks a lot of boxes for us. It would be really nice to also have a closer connection with my old network, moving back there.

I make a big effort to keep in touch with my friends. I'd say on the majority they don't reciprocate. Which is fine, I think it's worth it. It's not about who initiates the contact, moreso that there is contact. My friend that died is from before I met my girlfriend. So she doesn't know much about her. But even being abroad for a few years, not being back in my hometown much, since I've kept in touch with these friends, it felt normal calling them and talking about it.

And I reached out to a few more friends that I hadn't thought about much recently. You know, my friend that died in 2015, I probably didn't think about her at all in 2014. But since her death, I think about her all the time.
Top 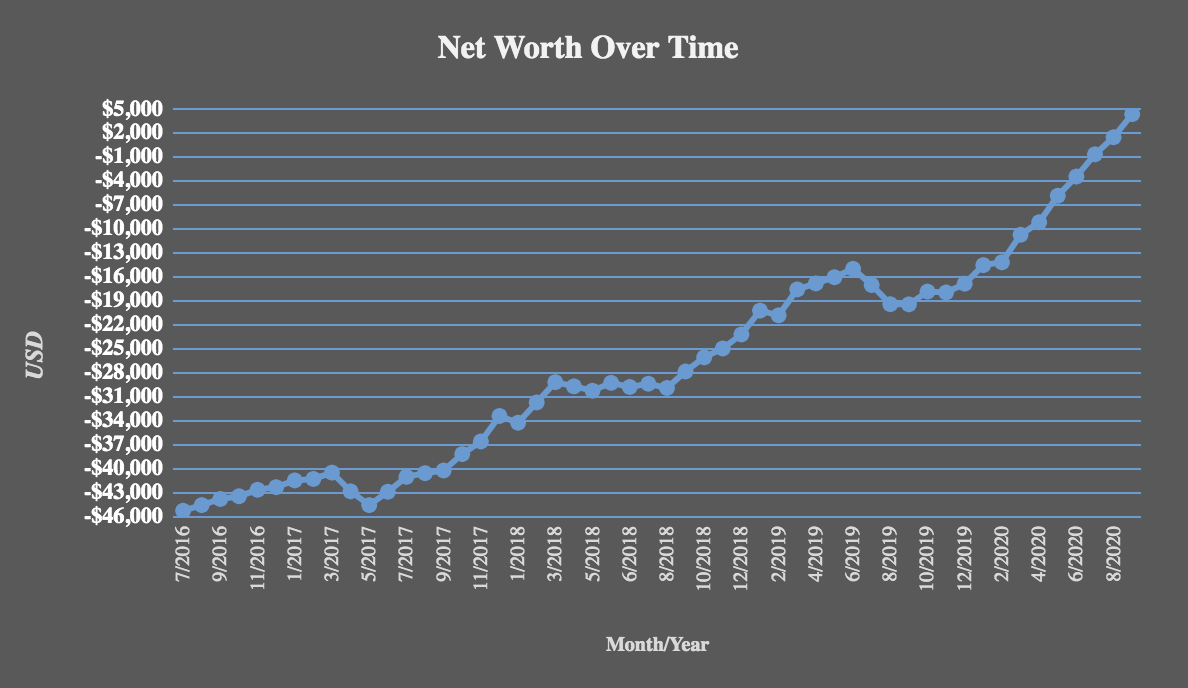 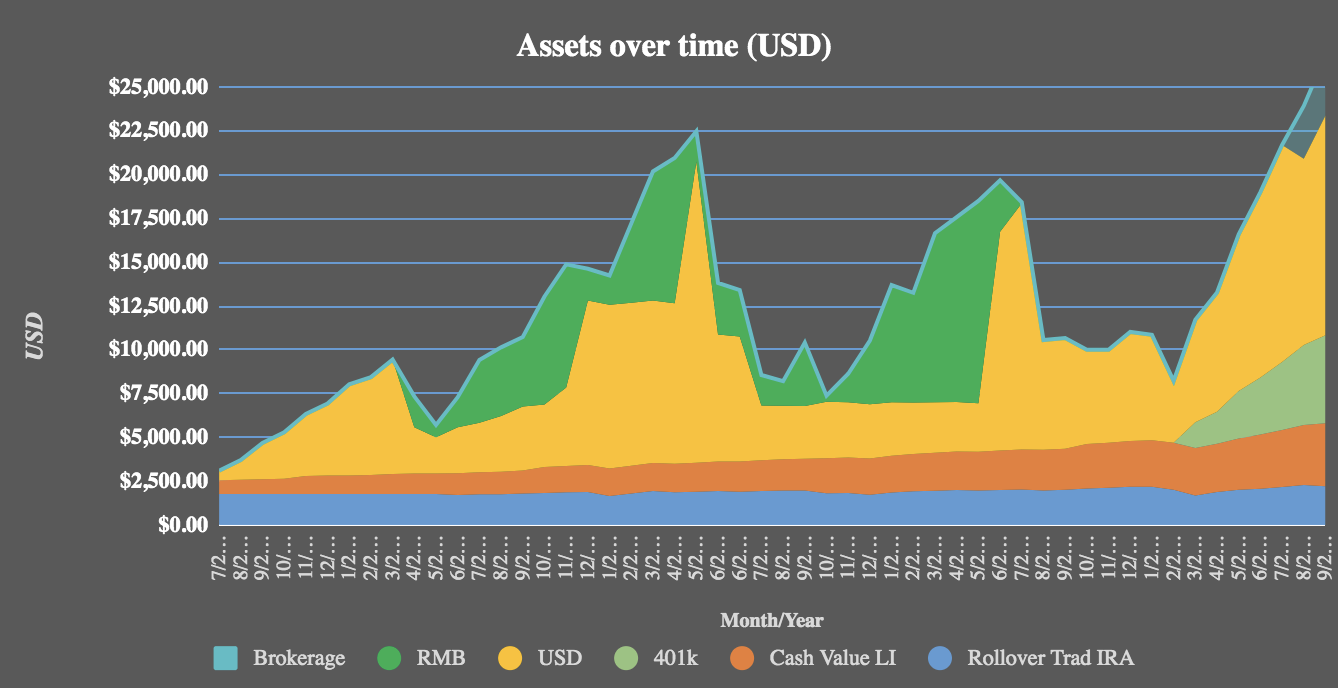 Might get a rental car for some backpacking/hiking this week and maybe again or a few times before winter gets here. Girlfriend is getting 2-3 phone screens and/or interviews/week right now. My work is pretty much the same.

New interest in drawing D&D battle maps for my group and coloring them in Photoshop/GIMP. It's fun, improves my game/player enjoyment, and might lead to some hobby income.
Top

Sorry to hear about your friend, that's tough.


I make a big effort to keep in touch with my friends. I'd say on the majority they don't reciprocate.

Same here. I think it's worth it too. Funny thing is I know many of them don't have current social lives significantly more vibrant than my own. In general I don't think people change nearly as much as we sometimes like to culturally romanticize they do. Probably never again in my life will I have a group of people* who share the same experiences with me day-in/day-out for 6-10+ years. Whether we like it or not those experiences and people shape us. My good friends from yesterday are still important to me so I reach out.

*who I get to choose, of course!
Top

Ya I feel the same and more so as high school gets further and further away. My girlfriend too would still name the two best friends from HS as her best friends now (besides me of course

I’ve made great connections through hobbies though. Not every hobby. D&d has led to lasting friendships, even after the game is over and people or I move away. My girlfriend also has some lasting friendships from animal rescue work while we were abroad.

stands to reason that hobbies that involve working together towards a common cause would be.
Top

you aren't *talking* to others while you play football with them. you are talking to others when you volunteer with them and when you play dnd. In addition, volunteering and dnd often attract people who would otherwise have similar values whereas anyone at all regardless of other interests can be into a sport. To bond with someone you actually need to interact with them.
Top

Ya it’s good insight ertyu, but there was still some reason I didn’t quite mesh with my soccer teammates over the last few years. For a lot of them, the competitiveness was a big turn off for me when considering any as potential friends. Usually after a game it was just a rush to leave all the negativity.

Maybe if I played on a better team it would be different.
Top

one thing i find in football players internationally is that people mostly played in the street as a fun way to get away from school and parents and are always ready to organize a game with a couple of rocks as goalposts for recreation, much like street basketball; whereas in the usa the parents drive the kids to training and games, are always hovering around, or worse, directly involved, and don’t leave the kids any room to breathe. so maybe their fun was squeezed out of the game in childhood?

(although, i should add, angry players exist everywhere due to ego/other issues)

Thanks for the YouTube video. At first I was like oh ya, Suarez, I’ve seen this all before. but turns out the rest was all brand new content for me

Football was pretty chill in China when I played with locals. But the pick up games with expats were 50/50. Sometimes gg, fun, chill. Other times people yelling at each other, storming off, getting in each others faces. Usually the losing side

. I like winning Of course but I like playing more than I hate losing. I can still have fun or see the humor in getting stomped lol

Edit: oh and Chicago I’d say on average 1-2 players were either angry or belligerent and aggresssive in the league matches. The pick ups were always super chill.

But in China the pickup games with expats! So much pride lol
Top

This is just a side effect of the expat life tho. On the one hand, as an expat, you're thrown together into very tight social quarters with people you'd rarely normally mix with. (Expats get it, it's its own type of animal even if you are in a multi-million city). On the other hand, a much larger % of expats are certifiably bonkers. Some of this is because, especially above a certain age, the people who become expats are the most dysfunctional misfits of their countries and move abroad because that's where they can still find jobs. Some of this is because being an expat is in and of itself hard - there's cultural shock, there's the social aspect, there's the lack of adequate mental healthcare. There's guys like you who do it for a couple of years while still young and fresh out of a sense of adventure and to see the world. But most of us career expats are just mad. I'm not surprised by what you experienced at all

I don't know an entirely representative sample, but I would make a distinction between the #wanderlust crowd and people who have some specific thing they want to do in a specific country. The former group seems to have a much higher probability of being maladjusted.
Top
Post Reply
415 posts