@jacob--IIRC, don't you have a blog post about this?
Top

WRT being vs doing -- I do agree with this in principle, but I think there's a distinction, at least in the people I know personally. Perhaps the difference entails various forms of mental illness or dependence on others? In the classic NEET example, a lot of these people couldn't survive without their parents funding the bill. Or a lot of the shut-in types I know suffer from extreme anxiety or depression.

I suppose it's a case of looking at people's lives and asking if I'd want to live that way or not. Someone like Ran Prieur or the Moneyless Manifesto author seem to be in "being" mode, and yet there's the appearance of agency there. Or at least they're doing it for political reasons rather than a failure to launch/thrive/succeed.

Even ERE seems to be mostly rooted in doing projects/skills for yourself. So maybe skill is the distinction? Again, many of the NEETs I know can't cook or socialize or do much of anything because they lack the skill. Their lives revolve around the Internet (or antenna TV) and eating premade foods. Whereas "being" in a positive sense seems to be rooted more in mindfulness and skill.

Or maybe these people really have mastered "being" and I'm so far into "doing" that I can't get in that headspace.

EDIT: I made a chart to illustrate my point: 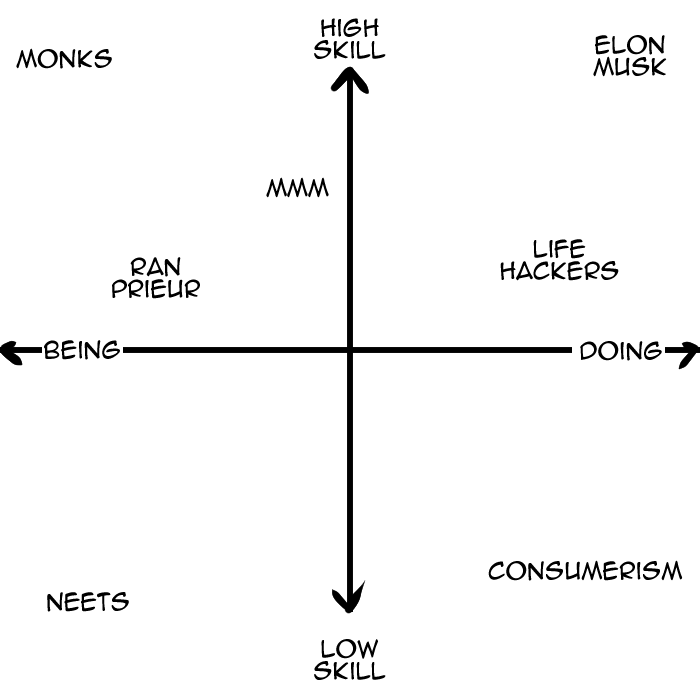 Seriously, what you want to avoid is dull routine and cheap distraction. If you relax in your feminine energy, you are open to possibilities and receptive to sensual input. The day unfolds, the sun is warm on your skin, the strawberry is delicious, music drifts on the air, a friend stops by...
Top

I'm off to add "relax in to my feminine energy" to my post-quitting strategic aims spreadsheet...
Top

I think this discussion is important. I grok the being vs doing. However, I also think that there is a difference between feeling the need to be productive and feeling that one has a purpose. The latter is extremely important in happiness. While the former may simply be a lack of well developed "being" skill,or it could be actions toward the latter. So I think definitions here are important enough to make the distinction. Sense of purpose is not synonymous with productivity. As a matter of fact, I believe many folks remain productive simply to avoid realizing they have no purpose. One can have a sense of purpose without needing to be extremely productive. So, when I discuss my fears of leading an epilogue life, it's a fear of lack of purpose(s). Or a fear of the lack of internal motivation needed to pursue those purpose(s), whether they are viewed as productive or not.
Top

While we're all confessing our amusements, it's interesting to me how many conclusions have been drawn on the basis of very little information in just the last page or so of comments. I appreciate the comments, but sometimes discussions on this forum devolve into a string of "answers" that are just talking past each other.
Top

[*]Games People Play - Jacob mentioned this somewhere, so I read it. Put a whooole lot of annoying social interactions into perspective.


I also read this recently by coincidence. How'd you like it? I thought it was very revelatory in the way that almost anything about psychology is to me... Some of it seems outdated/overly simplistic, but then again I'm not a psychiatrist so I don't actually see the patterns play out in real life (I also saw a lot of the games, spot on, in my own life and those around me). The overall construction and system of behavior is genius though, especially ego states.

Or people do a lot of things that they think are "green," but it's really just the same consumptive pattern with a different consumer product swamped out. LEDs for incandescents, etc. Maybe it's a little better, but the warm fuzzy environmentally friendly halo isn't exactly warranted. And there wasn't really any effort needed on their part. No real sacrifice.


I get the general point of the post and absolutely agree but I took a sustainable energy course that changed my perspective a lot. If I'm not mistaken, you are talking about people at Wheaton level 1 (not ERE Wheaton level but the OG) -- "buying some 'better' light bulbs, trying some recycling," etc. I think my professor had an implicit if not conscious understanding of the levels because of the way he taught the class. He described a scenario (when I say described, I mean every single module was a detail of this scenario or some background knowledge of it) where we reach a critical mass of Level 1ers that buy LEDs and perhaps get some Energy Star appliances, etc. That combined with some systemic (~Level 8[I think?]) changes would allow for a relatively painless transition to renewable energy. The reason I think he is aware of levels is twofold: (a) he spent a good deal of the class extrapolating on his scenario to encourage those at level 2-3 not to give up on the lowly 0ers and trying to show that even raising people one level up makes a difference, and (b) he would firmly refuse to accept the idea of a mass conversion of regular joes to hardcore environmentalists.

I don't remember all the details and thought a lot of his assumptions were too optimistic but he provided the closest thing to an integrated solution to the fossil energy problem from all angles that I've ever seen. I think the reality will be much more painful than what he predicts but then again that might be a pedagogic strategy to counter the doomerism that the types who would take that course are usually exposed to. I can try and dig up what I can of his predictions if anyone's interested.
Top
Post Reply
167 posts