oh wow that must have been a very nice hike
Top

@ertyu and @alpahaville - thanks for the comments. Happy to share some nice scenery with folks in other locations.

@M2aS - I'm a big Bill Bryson fan. I read Life and Times of the Thunderbolt Kid before A Walk in the Woods and was pleasantly surprised when Katz reappeared in the latter. He really adds some good humor to the story, though it was painful imagining them hauling canned goods on the AT.

@AH - You're welcome. There were at least a couple other near misses that I forgot to include but remembered after reading your comment. I definitely think one facet of backwoods competency is humility. Realizing when you've done something slightly foolish and taking the time to slow down and reevaluate is very valuable in my experience. Glad to offer some inspiration. One of the cool things about interacting here is to keep that inspiration bouncing around by sharing our experiences.

@theanimal - I'm glad you enjoyed the photos. It is hard to compete with some of the epic landscapes you have access to in Alaska.

Ptarmigan are present in the Cascades in Washington State, but I think you're right that it is a grouse. After doing a bit of online digging I think it is a female spruce grouse. I spotted it at a pretty high elevation (about 5,000 ft.) which is more common for the spruce grouse. They also don't fly off when disturbed as I'm used to with the ruffed grouse. I thought the "unusual" behavior was the result of the solar eclipse, but it turns out its just the MO for the spruce grouse.
Top

Walking in the Snow

Last Friday I had a lovely walk on my lunch break. We had a fresh few inches of snow the previous night, which accented the four inches already on the ground. It always surprises me how differently I perceive my environment when it is blanketed in snow.

Lately I've been thinking about how I can be surrounded by beauty, but take it for granted simply because I've become accustomed to it. I'm not sure if this is just a natural human tendency, or a mental construct that needs to be reframed. I suspect it is probably a combination of the two. The new layer of snow had me in high spirits.

I walk through this area almost every day, but a fresh dusting reframed my perspective. 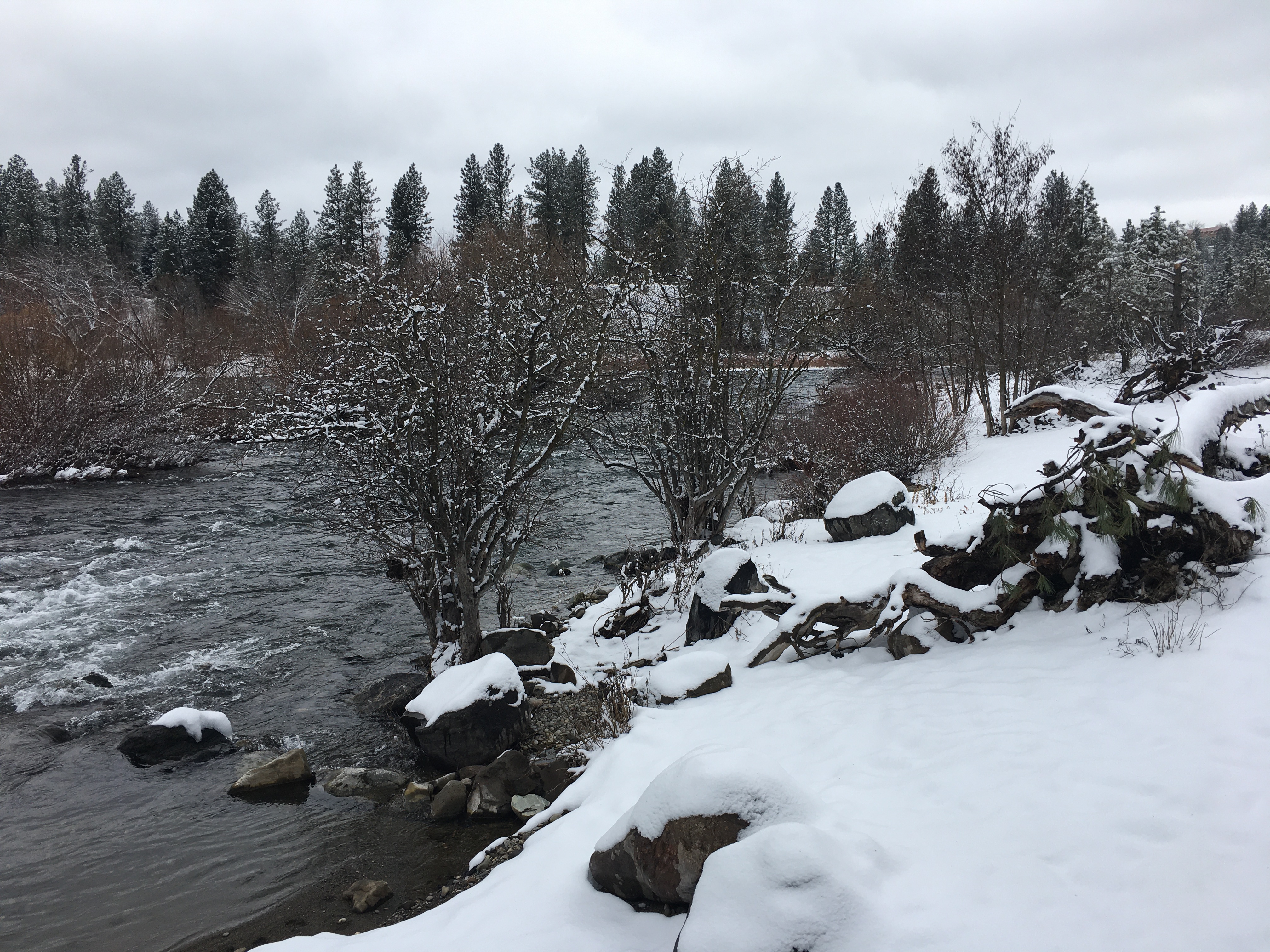 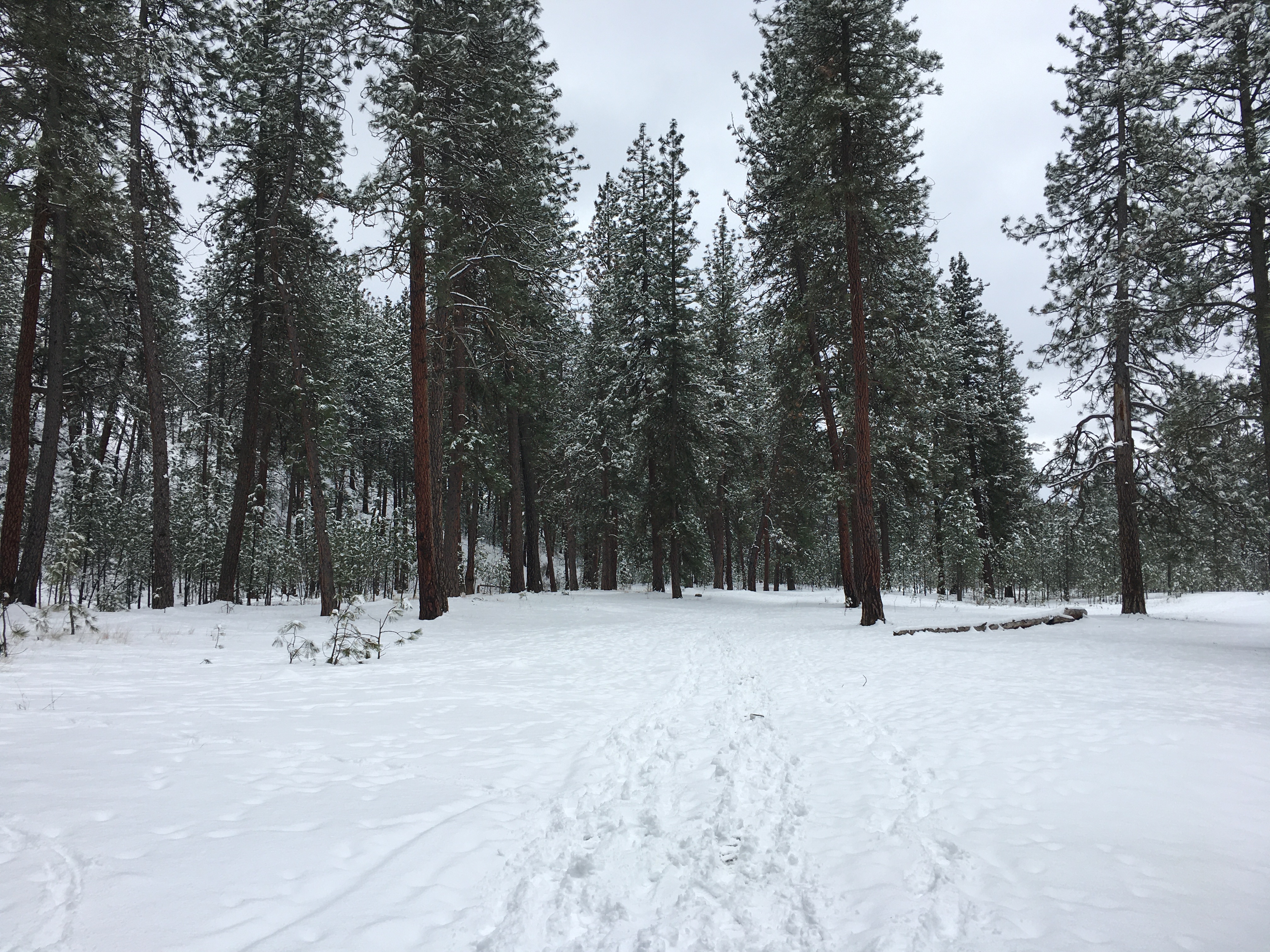 I spotted this badass out in the river fishing despite the temperature: 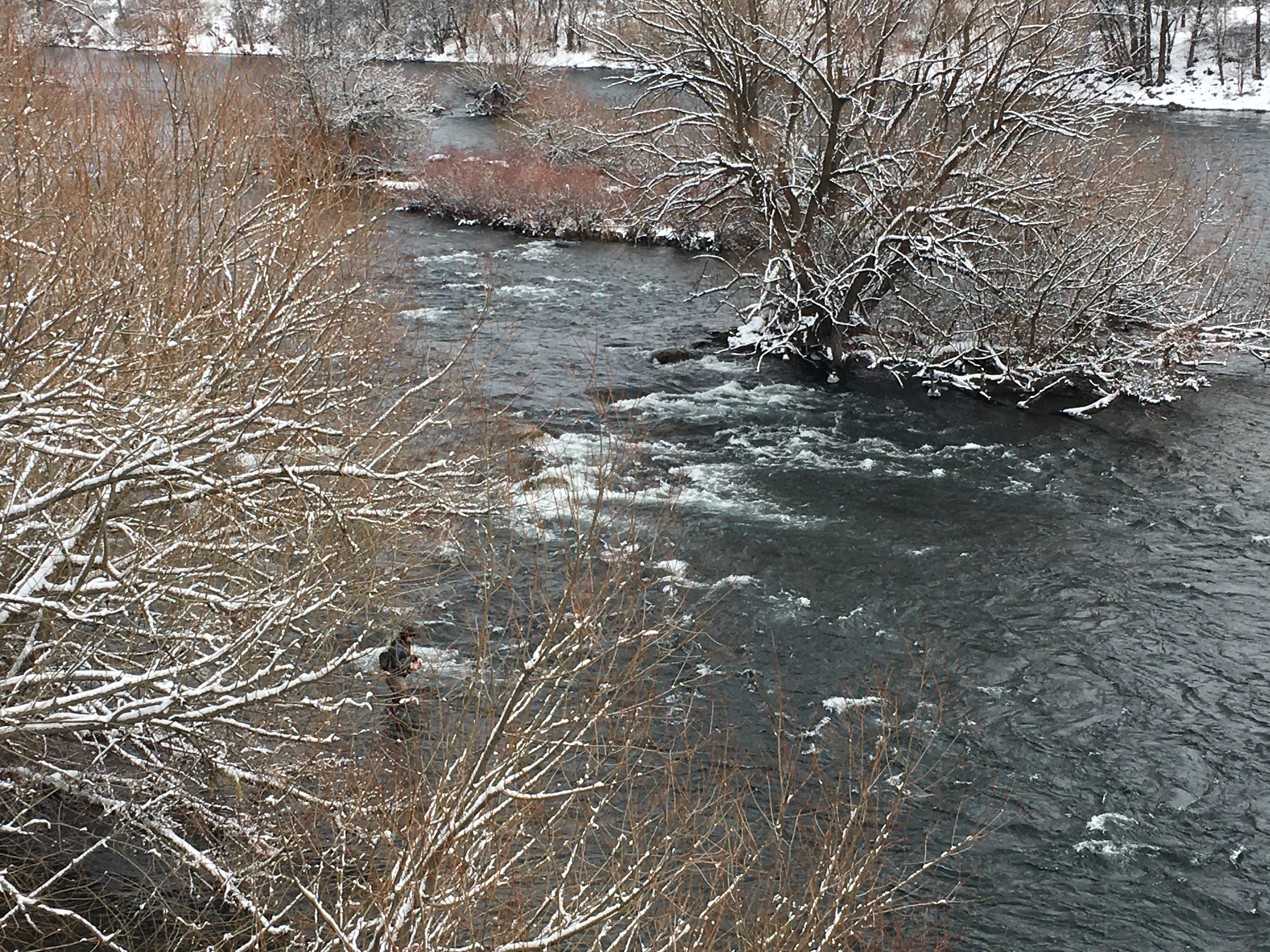 I walk along the river almost every day. I regularly see Osprey, but only see Bald Eagles a few times a year. I was walking towards a couple and they asked if I had seen the eagles. Sure enough, there were two perched on the telephone poles directly in front of us. I sat and watched for a few minutes before continuing along the rocks toward the river. Lovely seeing them take off down the canyon. 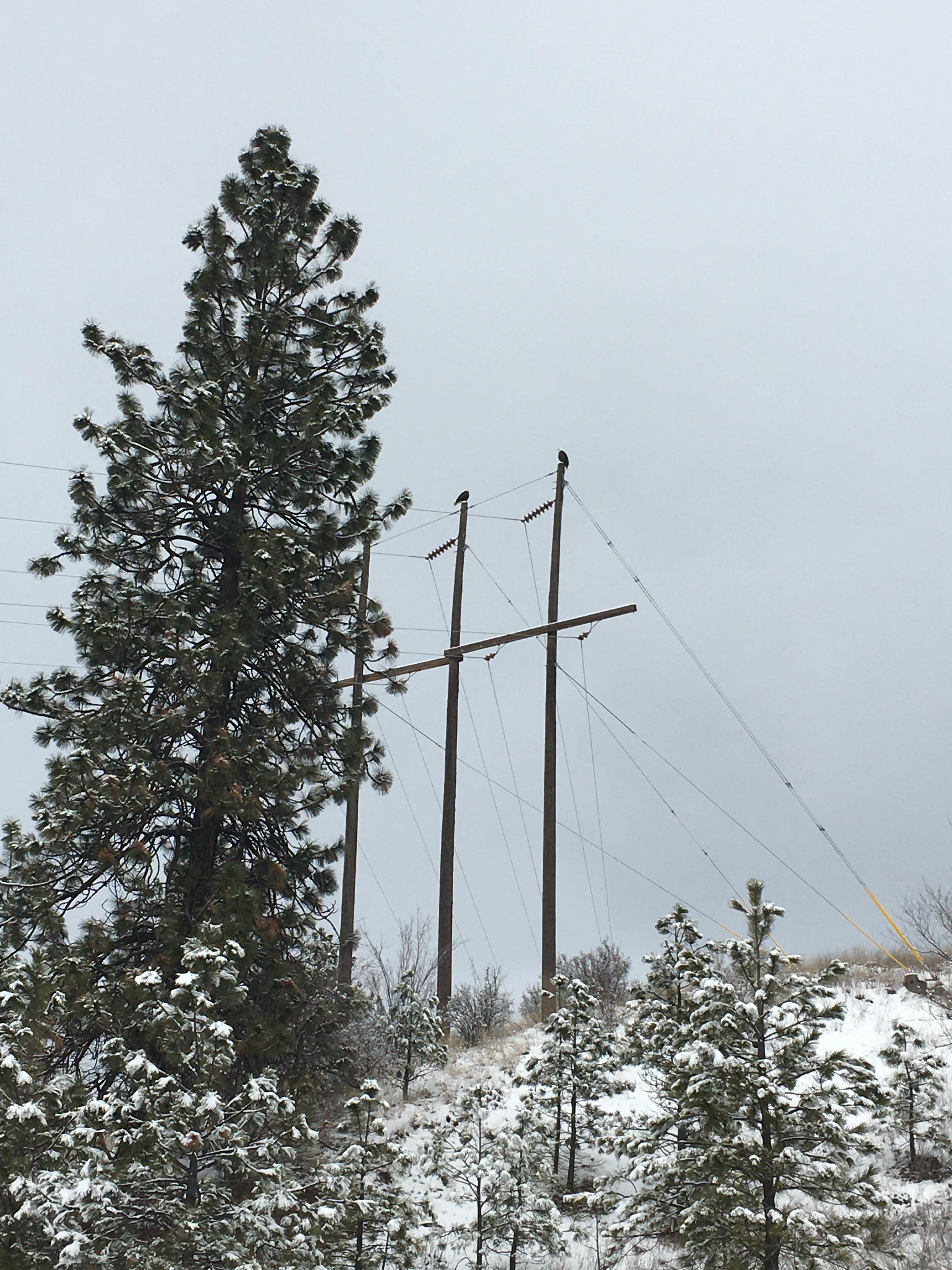 That afternoon was a good reminder that I can have meaningful interactions with nature without straying too far from home. I still love the epic journey deep into the mountains occasionally, but there is a lot to be said for choosing a home base with good access to trails and natural areas.

We are three loaves deep into our sourdough adventures. The first loaf turned out pretty good, but was somewhat dense. We didn't use parchment paper on the second loaf, and it stuck to the pan even though we used oil. DW was pretty upset with that, but we salvaged some of the bread and used the rest for croutons that were delicious. We made our third loaf last weekend. We added garlic and rosemary to the dough. This one didn't rise very much, either before or in the oven. The sour taste of the last two loaves was amazing, but it doesn't seem to be rising as much as we'd like. We are using a ceramic bread pan, so that may be part of the problem. But I suspect that we don't have enough active yeast through the wild fermentation process.

My brother-in-law was a baker and has a 10-year old sour dough starter. He sent us some dried starter, but we haven't started over again yet. I also bought some commercial yeast, but didn't want to add it to our starter because it looks like the commercial and wild yeast compete with each other. It's all been a good learning experiment, but we are looking forward to when we have light airy loaves after spending a couple hours in the kitchen. We'll keep our eyes out for a dutch oven when DW is thrifting.

On a more positive note, our sourdough pizza (with some commercial yeast) has been amazing. We've done pizza Saturdays the last two weekends and it has been a lot of fun. Sci-fi marathon with a fresh mozzarella and artichoke heart pie last weekend: 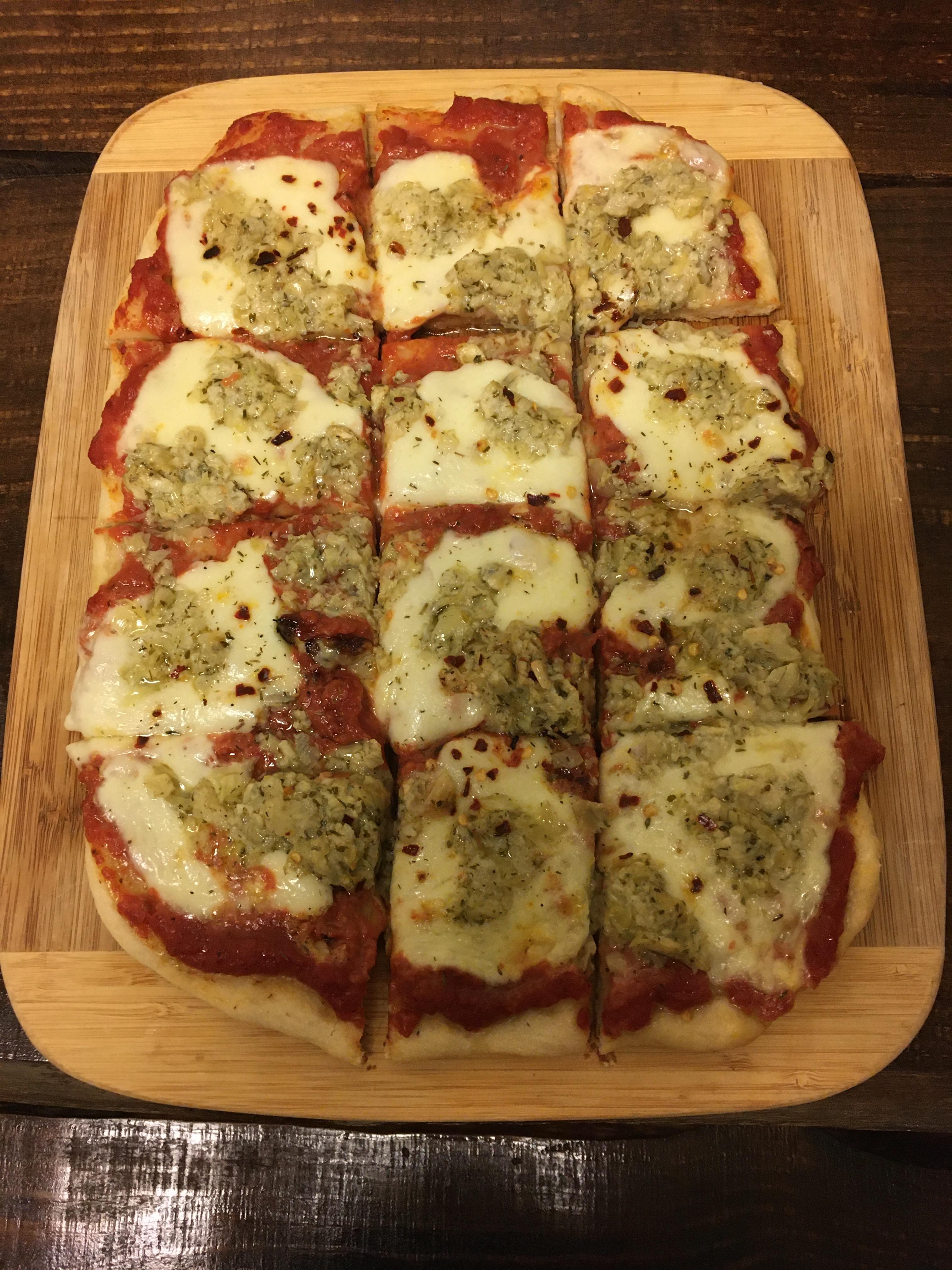