--- The deepest and most resilient rabbit hole of FIRE and beyond
https://forum.earlyretirementextreme.com/

Is frugality for the rich?

jacob wrote:One just have to be careful not to become a niche-player.

Seriously, the waste stream doesn't scale in the sense that everyone can take advantage of every opportunity, but it does scale in the sense of everyone can gain the perspective of functioning as a decomposer as well as a producer and consumer. Also, it is kind of fascinating to me that if you take "minimization of human labor" off-line in your system design, decomposition can be extended into a very long regress. Today is not the day that I will be using the bones I already boiled off to broth to provide source of calcium for chemical reaction, but it could happen.

by Jin+Guice
I've done weird niche stuff that won't scale beyond even like 1% of people. I used to worry about people copying me, they never do. Step two centimeters off the beaten path and 90% of people will never follow you.

The scaling argument is interesting in theory and in the apocalypse/ save the world/ peak oil sense it's important. I also get that if you're running a lifestyle blog, this is going to be a concern you have address.

I don't want to detract from Jacob or the genius of ERE and creating an efficient and sweet lifestyle model that actually does scale, which is harder than making a feasible model that doesn't scale, but...

Some examples from the microdata. Names are fictitious.

Sarah C. is 32 and single. She lives in Texas with a kid in a 4br/2ba single-family house that she occupies without paying cash rent. She has an annual after-tax income of $10,725 of which $8,931 was spent.

On the other end of the spectrum...

Would anyone be interested in more of these to see some “profiles in frugality?”

One thing that I am noticing, is that I am not finding many young people in the 99th percentile of frugality, suggesting that preferences or some kind of wisdom/mastery is at work. Extremely low food, housing and/or transportation costs are the norm here. The vast majority in this group does not receive welfare either. There was 1 household with a 50% savings rate, but everyone else is spending everything they earn. Can’t tell if it is semi-ERE or involuntary.

students who live on their scholarship?
many Millenials (first 30%) (because they don't have anything more to spend :-DDDD)?
young people in dead-end jobs?

by Fish
@Stahlmann - I haven’t yet looked at 1-person households, which probably explains why they’re not showing up yet. Should have held off before making that pronouncement.

Fascinating. You could start a new genre of short, short, short fiction in what might come to be known as the statistical abstract style.

BTW: I think the foreshadowing hints at possibility that Linda might be a Lentil Baby.

by Fish
Now firmly in original research territory. You saw it here first

For the savings rate calculation, I subtracted off retirement + SS contributions from both income and expenses (I couldn’t find a way to isolate SS). Also, I filtered out households with no income earners (retired) and those where earned income did not exceed unearned income... so this just includes households that are (productively) working out of necessity. N=2,725 (compared to 4,068 last time). 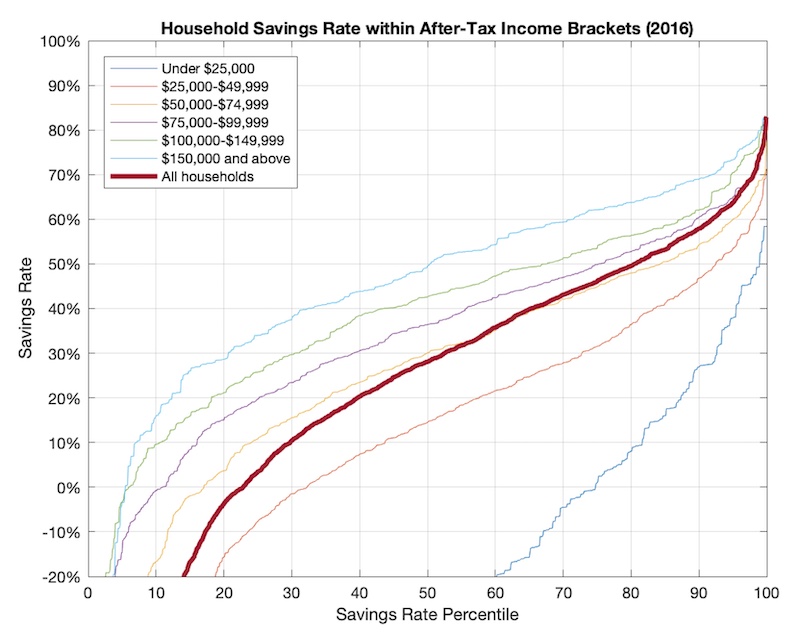 I spent a lot of time trying to understand this result because it was so unexpected. We hear that many households are living paycheck to paycheck and get the impression that it is the norm, but there are also many responsible households which save a considerable fraction of income.

The easy explanation is that the after-tax income data collected by the BLS-CE survey is not reliable, but having spot-checked it, it seems reasonable unless people were lying about their income. Another possibility is that expenses are under-reported, i.e. the survey questions didn’t capture everything or the respondents simply forgot about certain expenses.

But if the data is true, and 20% of households already save 50% or more of their income... then that kind of turns the existing narrative on its head.

Edit: Another possibility: the process of observation disturbs the variable you are trying to observe. For example, tracking expenses results in lower expenses, even if there is no objective to reduce spending. This would explain the lower percentiles being higher than expected (I was originally planning to use a log scale!) but not the higher end.

by 7Wannabe5
I think kilocalorie/food logs are notoriously underestimated by more than 20%. Perhaps the same applies to self-reporting on spending?

Another possibility would be that what looks like saving might be in many or most cases something more like "paying down previously accumulated debt." This could also be analogous to yo-yo dieting. Taking out the population without earners might mask this tendency, because it is unlikely that most households are consistent in their savings rate over life of household (or economic life of members of household.) For instance, one year of unemployment can eat up 5 years of consistent 20% savings if expenses are not reduced OR two years of severe 50% belt tightening to pay off credit card debt might be followed by 15 years of 10% savings.

by Fish
@7 - Good point about debt repayment being an explanation for the unexpectedly high savings rates. Unfortunately more than half of BLS-CE respondents don’t disclose exact value of assets and liabilities. I tried to do net worth percentiles (as measured by years of expenses) and that was a dead end due to lack of data.

Another explanation from the Don’t Quit Your Day Job blog: https://dqydj.com/how-much-do-people-save-by-income/


the CEX data isn’t the final word on savings rates, as self-reported income taxes are much lower than actual taxes paid.

After noting this discrepancy, the blog presents an alternative calculation of savings rate by looking at year-over-year changes in assets. Since asset values can fluctuate it’s still not a perfect measure, but interestingly the asset method shows a constant 5-10% savings rate across a very wide range of incomes.

If a good deal of this is locked into real estate or other less than perfectly liquid assets, then the "most Americans can't come up with $500 for an emergency" rule of thumb could still easily hold true.

by IlliniDave
At first glance I would agree that something seems to be missing. I would expect that among the middle and upper-middle income tiers, a savings rate of 10-15% would come with a significantly higher percentile rank.
All times are UTC-05:00
Page 7 of 7