(In case you're counting calories, soy beans contain more than most other beans.)
Top

white belt wrote: ↑
Sun Dec 20, 2020 12:03 pm
What are some good recipes and methods that incorporate soybeans? I’m making my first steps in replacing animal protein in a meal with something plant based. I’d like to start with soybeans instead of something more processed like tofu.

Do I just treat them like other legumes and incorporate them into recipes that use beans?

i'd say learn to ferment them. untreated soy beans are vile

Ego wrote: ↑
Sat Dec 19, 2020 10:27 pm
The trouble with these cans is their size. Once opened we are going to have to eat an awful lot of one type of bean or freeze them. It may make sense to hold onto the can of garbanzos until we have a party (next winter?) and make a ton of hummus as Laura Ingalls suggested.

oh, right, save it for a party, or freeze in baggies for a quick reheat.

for the red beans, either the chili or red beans and rice are good ways to feed a crowd.

I did Okonomyaki yesterday.
These Japanese pancakes are delicious and super easy to make. You may have trouble finding a couple of toppings but I guess the base recipe can be interesting and tweaked to be used with other ingredients.

Separately, whisk 1 egg with a tablespoon of oil and 3/4 of a cup of water

Mix the liquid with the solid and let rest for a while.

Cut some cabbage, ideally the 1.5 times the volume of the “dough”

Once it has released a bit of fat, cover with the dough
https://ibb.co/hdtFQC6

Cook for a few minutes, then turn and cook the other side.
The inside should be a bit moist, but there is no “correct” time, just cook to your liking.

At the end, top with:
A bit of mayo
A bit of Okonomyaki sauce
Some nori seaweed
Bonito flakes

Mrs. Ego did a great job with the farro today. She brought several cups of water to boil, tossed in a cup of farro and a little salt then left it to boil for 20 minutes. There was still a lot of water left which was drained off then she added a little olive oil, salt, pepper, chili flakes and dried basil.

She then stir fried a clove of garlic, half an onion, kale, broccoli, mushrooms, tofu and tempeh. Topped with some orange sauce. She calculated the cost per plate at about 85 cents. Tempeh is the most expensive ingredient at $2 a block. We have plenty of beans and grains so we may have to figure out how to culture the spores from the chunk of retail we have leftover then make our own. 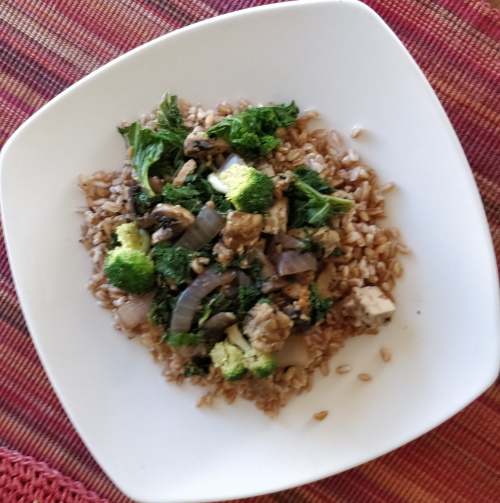 ive been experimenting with vegan meals lately for reasons discussed elsewhere. recently bought a bunch of nice organic produce that needs using. so i wanted to cook 3 complementary dishes this evening that felt like a complete meal.

lately i've put my highly inefficient apartment stove out to pasture in order to save electricity. i've been using a portable induction cooktop instead, which is great and very efficient. i also use my electric pressure cooker, same thing. but the way the kitchen is laid out, they share the same circuit and can't operate simultaneously. there are other circuits but arent well placed. so... i could only use one outlet for 3 completely different preparations. also i had less then an hour to get it all done.

1. in the uncovered pressure cooker i sauteed a small yellow onion, once translucent added 4 sliced cloves of garlic, tossed without burning, added 2 cups sorted rinsed french green lentils and 3 cups water, 1 tsp kosher salt, and a bay leaf or two. closed, cooked in high pressure for 10 minutes. once cooked, unplugged the pot and put aside for slow release.

2. plugged the induction thing into the outlet, placed my cast iron griddle on top, heated up to medium with a bit of olive oil, added half a small pack of cremini mushrooms that i sliced thin, sautéed, added 2 cloves of garlic sliced thin, added 1 cup crushed walnuts, reduced the heat to medium low, toasted it all a bit, added a nice bunch of finely chopped parsley, barely tossed, deglazed the pan with water (later realized could have used a splash of white wine), seasoned with salt and fresh ground pepper, reduced the heat to minimum till it dried up. put aside for the finish.

3: mandolined a beautiful jewel sweet potato(yellow skin/orange flesh), put my big sautée pan on the induction device, heated to medium high, added a glug of avocado oil which filled just a thin layer at the bottom and started to add the sweet potato in caroussel order. fries quickly so i went on flipping, then removing, the adding more slices till all was done. had to reduce the heat a bit halfway through the process, still medium high but just closer to medium. meanwhile i release the last pressure from the lentil pot and tossed out the bay leaves. lentils were just right and plump neither watery nor dry.

in a bowl, put a scoop of lentils at the bottom, topped with the mushroom walnut mix, and stuffed sweet potato fries around it sprinkled with maldon salt. sorta like a deconstructed mushroom veggie burger with sweet potato fries or something, minus the bread obviously. washed down with a splash of boxed cab. beer would have been good too, for the umami, but i didn't have any. dinner soundtrack was a bit of milt jackson.

got me a nice pile of cooked lentils now to try in different combinations. the rest of the stuff is gone but with the pressure cooker free i can try "air frying" another sweet potato (same appliance does both jobs). might make a nice breakfast.
Top
Post Reply
166 posts