Not sure if this is a pipe dream, but the visualize your ERE thread in the inspiration forum left me inspired

Our new apartment should be quite a bit bigger.

Now, I have no construction skills at this point. I also have no tools here except a screwdriver.

Do you think a total novice like me could build something like this? Would it be better to go at it alone or pay for some sort of Chinese contractor? What sort of tools would I need to accomplish such a feat? Would a drill, measuring tape, and one of those triangle protractor things be enough?

As for cost, it sounds like in the US it can cost anywhere from $150-$500 to make something similar. I'm hoping it would be cheaper for me (in terms of tools, hardware, and/or labor) being that I'm in China.

It seems there are many how-to blogs posts and forum threads from which I could more or less follow/modify to my own project. I feel pretty intimidated however having never built anything worth mentioning in my life. I tried to make a bed frame in college, and ended up having to get a tetanus shot for an infected toe after I stepped on a nail

My first instinct is to avoid a construction project in a place you're renting. How long will you be living there? How do you plan to remove it and move it to your next place?

I'd recommend just putting up a hangboard. 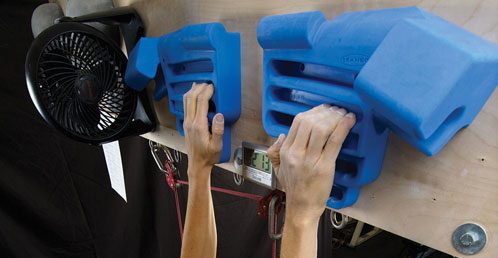 Absolutely you could. A friend of mine did this in his basement and I'm pretty sure he has no carpentry skills whatsoever. (Although he is an IQ>140+ math professor with a sense of self-preservation and applied common sense. Also a climber.). A drill, a handsaw, a screwdriver, some way to measure distance, and a square would be enough. For the last two, you could in principle use a piece of paper ... although in general the rule is that while "experts" can "substitute" tools (use a piece of paper with a known dimension), noobs are better off with proper tools. You can also use metal brackets to make it easier.

Construction wise, the pictured setup is pretty ghetto and something a carpenter could bang together in short order. But that's all you need. It looks like 4x4s and 2x4s that's either screwed or bolted together. Plywood is 3/4" thick or better. The worst thing that could happen is that you fall on your ass for 3' and get a large piece of plywood on top of you. US cost for the wood in the picture would be around $75-100 or so.

I would suggest planning it out. It's conceivable that wherever you buy the wood would be willing to make the cuts ... but you would need a plan either on google sketch on on paper. Certainly a bit of experience would help here to get it right the first time. Maybe try to build something simpler as a first/educational step? There's a thread on building a pull-up bar around here. Pictures were posted. Maybe start with that? Instead of a bar .. you could screw in a piece of plywood with holds at the top, for starters.

I figure ffj and fbeyer can provide additional suggestions?
Top

You probably know, but good holds are the most expensive part of a homemade wall. I would go for the hangboard or a small campus board.
Top

Two of my friends have done this, one in the garage and one in the basement (they do both own their homes). One created molds and cast his own holds from epoxy, which turned out alright but not as good as professionally manufactured ones. I believe the T-nuts were the most expensive part of the build.
Top

I think you could 100% build what is shown in the video or the picture in your post with the tools Jacob recommended (you'll need a grinder for making the wooden handholds in the vid I linked).
Top

This won't help the op since he is in China but in the US I have sometimes seen climbing holds or whole walls on Craigslist for cheap.

We plan to live in the apartment for 1-2 years, so I feel pretty safe setting it up in the living room. Plus, it will be freestanding, so it should be simple enough to break it down when we leave, and shouldn't leave any permanent damage behind.

Climbing holds are ¥50-¥100 each online. We could find rocks, or repurpose items. Personally, I like wooden holds. Could wooden holds be made with less tools than they use in the YouTube video?

When we move in, I will take some measurements and try to sketch up what I want. I worked with a Canadian carpenter at the training center. I might be able to have him help out with the sketch.

Hopefully we can make a simple but decent climbing wall for cheap. I imagine there will be a lot to learn, but if we eventually move into a more permanent situation, we can apply that knowledge to an awesome cave like the one in that video.

A drill, a handsaw, a screwdriver, some way to measure distance, and a square should all be pretty cheap here. Bolts and screws look pretty cheap to order online as well. However, I'm not sure how much more we would need to make our own (preferably) wood holds. It looks like the Youtube video shows the guy using a sander and a vicegrip. I will have to check some of the shops around here.

Depending on the cost of making holds, we probably will first try something small.
Top

Apparently this guy used a knife, a chisel, a file, and some sandpaper for his wood holds: reddit link

The thing about a hangboard/pull-up bar, is while I could find it useful for adding to the top of my wall, I wouldn't find it enjoyable enough to be any more excited about working out on that than I am currently with working out at the gym downstairs

Climbing gyms routinely change up their routes, rearranging the holds. It doesn't take long to master a route and then you lose any further challenge/benefit from it. How much time and effort does it take to rearrange the holds? If its as simple as busting out a power drill for 30 minutes that's one thing. I guess I assumed it would be more involved than that.

Couldn't find it, but I saw a video once of a guy who installed holds all over his 2 story house. Ceiling, stairwell, and walls. He moved from room to room, up stairs, everywhere just on the holds. It was bitchin.
Top

It isn't too difficult, just about how you described it actually. I set routes at a gym for a couple months.

There are evenly distributed T-nuts on the wall, you take a screw of appropriate length for the depth of the hole, line it up and drill it in.

Some walls you set up with actual routes. If we did this, then maybe once or twice a month we would unscrew all of the holds, and then set up some new routes.

We could also set up a type of wall at our old gym called "the woody wall." It was only called that because all of the holds were old hand carved holds from one of the owners former basement walls. They have another name that escapes me. It is basically a wall where every t-nut has a hold in it, and it is up to the climber to make up their own routes and challenge themselves.

The latter type of wall would be my ultimate goal, personally, but I think I will hold off on that as it would require a lot more holds! Maybe down the line if we own a home.

For now, a simple, high grade free standing wooden wall with potentially hand-carved holds. However if a grinder is cheap enough...
Top

A handsaw, a drill, a tape measure, and drill bits including drivers for the screws. Yes, anyone can build one of these things assuming you will be buying the handholds and T-nuts along with dimensional lumber and plywood.

This would be a great beginners project for a novice.
Top

Climbing holds are ¥50-¥100 each online. We could find rocks, or repurpose items. Personally, I like wooden holds. Could wooden holds be made with less tools than they use in the YouTube video?

Depending on the cost of making holds, we probably will first try something small.

You can make wooden holds with a wood rasp, sandpaper, a drill, a handsaw, and coping saw. Depending on the amount of wooden holds you want, it may take a while to manufacture the desired quantity without a grinder. The grinder just makes it so much faster. You can substitute an electric sander for the grinder - you just use up a lot of sandpaper. You can also make or buy a sanding drum for your drill and turn your drill into a stationary sander.

At this point your just limited by your imagination, the speed at which you want to finish your wall and handholds, and your affinity for searching youtube for ideas on how to make any tools you may need. Here's a youtube channel that can help you build some very useful power tool stations from existing electric hand tools to get you started with this project and or any other projects after your wall is complete: Paoson WoodWorking . Good luck! I hope you post a picture of your wall when it's complete.