--- The deepest and most resilient rabbit hole of FIRE plus a lot more!
https://forum.earlyretirementextreme.com/

by Spartan_Warrior
Any of the gun owners here have thoughts or experience on reloading ammunition? For someone looking to regularly practice shooting with at least a hundred rounds a month, is it cost-effective? Is it easy? Is it time-consuming? Are the better presses/kits worth the money? I've seen 9mm presses anywhere from $100-500 retail, haven't checked the second hand market yet.

by BRUTE
9mm ammo is cheap, 100 rounds per month isn't that much. it would probably make more sense for more expensive rounds and somewhat higher frequency. then again, Spartan_Warrior said "at least a hundred rounds a month" - maybe there's room.

Compare to homebrewing beer(*). What do you drink (Budweiser or craft)? How much do you drink? How convenient do you want it to be (mash or kit)?

(*) Most of the money is made in selling equipment to the public. In other words, reloading is economically efficient = properly priced. As an individual, you mainly do it for reasons other than cost-effectiveness.

You'll probably find your best answer by asking the people on the range if they reload or just observe how many pick up their brass and bring it home. (They might not reload themselves ... but they probably know someone who does if they do.)

by Jean
In switzerland we always collect brass.

by Ego
Here at the police range the retired officers association sells reload at cost but you've got to shoot what you buy that day.

by George the original one
The higher volume of shooting you do, the more time you would be running brass through the press & weighing charges. It doesn't scale well. You also have to consider proper storage of the supplies as powder doesn't age all that well and few thousand primers is "a lot of combustibles".

I reloaded .243 with Nosler partition bullets and a slightly hot load for hunting. Could make 20 to 40 rounds in an evening, but I wasn't shooting more than 100 rounds a year. Shotshells... the press is cheap (or was cheap back in the 80s) and production went a little faster.

by jennypenny
+1 to what Jean said. I'm surprised that people don't always collect their brass.

@SW -- You could try to find someone who does the reloading as a hobby and trade your empty brass for some reloaded ones (you'll get a percentage back, not one-to-one). I'm not sure what the rules are in your state though. I'm guessing it's more strict than where I live so maybe it's not allowed.

Except for the part where an incorrectly-brewed beer has little chance of injuring you.

Handloading ammo can be fun and surprisingly math-based if you like that aspect, but I wouldn't really call it cost-effective...more of a hobby. I would never buy handloads privately, because there's no guarantee of precise quality control.

If you want to do it yourself and are confident in your precision, you can generally buy equipment used at a great discount. The cost of powder, primers and brass is another matter. Keep in mind that the brass can't be endlessly reloaded even if you retrieve it.

Having said that: collecting brass from non-commercial shooting sites such as gravel pits is kind of like beachcombing and can provide crazy-great entertainment if you're weird that way. Which we're not. At all.

I recall one range that sold reloads that did not allow users to pick up brass...even their own. They also didn't want people shooting Blazers because the cheap casings would,get mixed in with the stuff they picked up.

My dad was really into reloading. He was a prepper of sorts and has a lot of primers, brass and smokeless powder squirreled away in my mom's home.

Over his life the price of ammo moved around. It was cheaper to reload both centerfire rifle and pistol cartridges and shot shells in he late 70s and 80s. We would have our reloading nights...it was kind of a bonding experience between us. I think my dad and brother actually enjoyed the hobby. When I see the prices at Walmart I cannot see dusting off those old presses and dies.

Dad would load up light loads for me so I wouldn't be so scared as I transitioned from rimfire to centerfire or from 20ga to 12ga.

Another advantage I've started to appreciate is we could zero our particular gun on a particular bullet and charge combo and get very repeatable results. Swapping brands, charges, bullet weights etc. moves the point of impact around. My dad had his favorite loads.

Me I shoot so little I'll just buy a box of something reliable, zero a couple of shots and store the remaining rounds with the gun. This doesn't work when I find a deal on cheap oddball ammo and want to plink it away all afternoon. So having consistent reloads is nice. One of my old friends who competes not only reloads, he spin balances his bullets in an air fixture to look for casting voids. So hand loading is a must for his long range rifle competition.

A decade ago I started seriously shooting and hunting with air rifles. I stopped using my firearms. Too much fuss. Reloading just adds to the hassle factor. Unless you like that aspect...,

by enigmaT120
I think reloading has to be a really boring way to pass the time. No worse than knitting or embroidery I guess, which I also don't do. My SKS ammo is all steel casings anyway so I don't have to worry about it. And the .17 ammo is so cheap I wouldn't bother.

I do pick up brass where people have been target shooting, to include with some other scrap stuff I sell to the recyclers. Brass is worth decent money.

by MZMpac
I reload my own ammo. I only reload for rifles, and I do it mainly for accuracy.

In terms of cost savings, it makes the most sense for pistol shooter, AR shooter, or other high-volume shooting. I am definitely not saving any money yet and probably wont recoup my costs for 2-3 years. I have only been reloading for about 6 months though.

When you get into reloading for precision and accuracy, the costs go way up because you need higher-end equipment manufactured to tighter tolerances. On a per-round basis, for consumables only (brass, primer, powder, bullet), I do save about 30-40% compared to top-shelf factory ammo. But again I spent somewhere around $1200 in equipment.

It's all about how far you want to take it. A frugal reloader could get a decent set-up for about $500 if they piece out what they need and look for deals.

Avoid the temptation, however, to buy value lower-end equipment. You will end up buying twice in the long run, trust me.

Reloading is an extremely deep topic with endless technical minutia to learn and obsess over. What makes it fun is both the craftsmanship aspect of it and the satisfaction you get from a really accurate, consistent load. You wont get that with factory ammo.

Somehow we missed the excitement by making wine all these years.

by enigmaT120
I think it's beer bottles that sometimes explode, if the beer is bottled too soon or too much priming sugar is used at bottling. Not kettles.

Wine could do it too if you made it sparkling.

by Riggerjack
Depends on what you shoot. I have a friend who shoots an original 1871 Martini rifle. You can't get factory ammo for it.

Me, I'm too busy, but it is on my retirement projects list.

I host a shooting party on my property every few years, and it's good to have reloaders to pass the brass off to. At some point I intend to build a bullet catcher, just to recycle the lead. That may have to wait for the retirement home, though.

by Sclass
Never thought I'd do this again but here it is. I loaded these rounds myself. 9mm and 380. Economically stupid. New ammo costs the same as the materials I used (brass + powder + bullets + primers). Fun and rewarding though. The focus required during charging and pressing puts you in an interesting zone.

Borrowed most of the equipment and materials from my dad's gun room. Haven't touched it since I was 13. Good memories of hanging out with my dad when I used to like him. 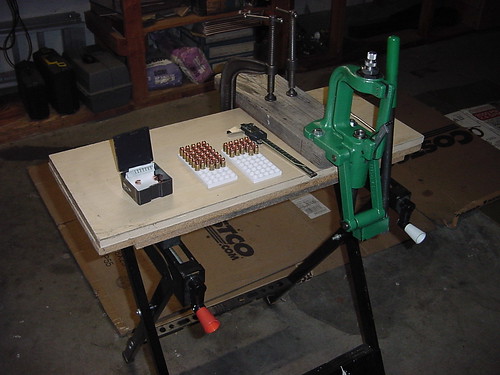 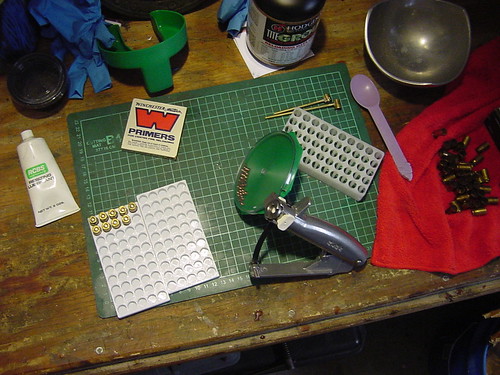 I really have no interest in shooting this stuff off. For some reason I wanted a couple of boxes for my 1911 clones which had both become paperweights after I used all the ammo up in 2000.

A lot of people say reloading is relaxing, but I don't want to invest that much to find out. Not when I can buy an ammo can worth of bullets for reasonable prices. You have a good looking set-up though.

by Sclass
The 1911 designs I have are clones. Like a Colt Mustang and a Colt 9. They look and feel like the old John Browning design but they are smaller and chambered in little rounds. They just happened to be the guns I had lying around.

Yep, reloading is seriously boring too. Like assembly line work. Not relaxing for me because I obsessed about charging and tolerancing. Mistakes are not acceptable. Learned a lot of the details that go into making reliable ammunition. I got really Kaizen with it. So that part was fun.

There is this new California ammunition background check here. I found out the hard way that it is difficult to buy ammo in CA over the counter with the new law. I don’t have a criminal background. I just have no background according to the states new system since I haven’t bought a gun recently. All it takes is a change of address and you’re out. I’m basically not on the radar screen as a good guy or bad guy. Getting on meant things like buy a new gun or paying for a one time $40/day permit to buy and putting the ammo on layaway for two weeks. Too much trouble.

While I was slaving away at the press I did question my logic. So this is why I paid more for more to reload my own. Wasted my time. I only wanted a few rounds for my emergency preparedness kit and I didn’t want to jump through all the background check hoops. It was a nice diy skill to pick up for the zombie apocalypse. Made me feel Independent and good.

by ffj
I had it my head that these guns were really old, talking about being 13 when you last did reloading. But maybe they chambered these knockoffs in other calibers a long time ago too?


California is nuts with the restrictions. Why can't you just drive over to Nevada or elsewhere and stock up? Or is there a law against that too?
All times are UTC-05:00
Page 1 of 2