The Skills Necessary for Constant Reinvention

What skills to learn, what tools to get
Post Reply
94 posts

The researchers at Stanford's Graduate School of Education have spent more than a year evaluating how well students across the country can evaluate online sources of information.

Middle school, high school and college students in 12 states were asked to evaluate the information presented in tweets, comments and articles. More than 7,800 student responses were collected.

In exercise after exercise, the researchers were "shocked" — their word, not ours — by how many students failed to effectively evaluate the credibility of that information.

The students displayed a "stunning and dismaying consistency" in their responses, the researchers wrote, getting duped again and again. They weren't looking for high-level analysis of data but just a "reasonable bar" of, for instance, telling fake accounts from real ones, activist groups from neutral sources and ads from articles.

Take a look at the executive summary. They provide examples of real and fake ads as well as snippets on how the students arrived at their decisions. Amazing.

In 1671, Governor William Berkeley of Virginia wrote: "I thank God, there are no free schools nor printing and I hope we shall not have, these hundred years, for learning has brought disobedience, and heresy, and sects into the world, and printing has divulged them, and libels against the best government. God keep us from both." As the British government once told the governors of Massachusetts, "Great inconvenience may arise by the liberty of printing."

I predict that the number of high school graduates who "think they know all the facts" because they "read all the news [on facebook]" will decrease. I know I'm looking forward to seeing this effect in at least a few people.
Top

[Mod edit: Memes should preferably remain "link only" (use URL not IMG) lest the forum discourse collapse several Wheaton levels downhill real fast. As mentioned elsewhere I'm trying to keep this forum/site a few levels above firing slogans and pictures at each other. Insofar that's unpossible we might as well go to facebook, right?

Evidently, they like the taste of scapegoating Koolaid. With a shaker of sadism mixed in for the 5-year olds in handcuffs as a "threat to national security."
Top

Why We Believe Obvious Untruths

You know that smoking causes cancer. But can you articulate what smoke does to our cells, how cancers form and why some kinds of smoke are more dangerous than others? We’re guessing no. Most of what you “know” — most of what anyone knows — about any topic is a placeholder for information stored elsewhere, in a long-forgotten textbook or in some expert’s head.

The sense of understanding is contagious. The understanding that others have, or claim to have, makes us feel smarter. This happens only when people believe they have access to the relevant information.

The key point here is not that people are irrational; it’s that this irrationality comes from a very rational place. People fail to distinguish what they know from what others know because it is often impossible to draw sharp boundaries between what knowledge resides in our heads and what resides elsewhere.
Top

Ego wrote:
I wonder if Tesla's technique of having the wealthy fund development that will benefit the masses isn't also a way to get those who have a greater influence on the system to buy in. Paint It Black!

One step beyond.
https://www.youtube.com/watch?v=-FseeVy7uvU
Top

One of the fringe benefits of travel is that it turns a spotlight on just how many of the things that I believe are bottom-of-the-pyramid needs are actually things to which I've become habituated. They can often be barriers to the change needed for reinvention. Fortunately, with effort they can be unlearned.
Top

I agree, but two things that have changed since you and I were children are that there are twice as many humans on the planet, and most of them now live in urban locations.

I believe that the most basic skill sets needed by humans are those that are now required for our survival, because evolution gave us big brains in exchange for long guts, fur, and serious teeth. If you found yourself alone in any sort of wilderness, and you could only bring one tool with you, it would probably be a knife or an ax. If you could only bring a few skills with you, they would probably be fire-starting-and-maintenance and/or water acquisition/filtration and/or rough shelter from the elements creation.

However, and this is a big however, the reality of the almost universal prevalence of technology and urbanization of very large human population pretty much either renders the above moot or secondary. In urban situation of 21st century affluence, a 6 year old of average IQ can order a pizza to be delivered to a hotel room using a phone app. In urban situation of 21st century poverty, a 6 year old can dig through a giant trash heap looking for copper or food scraps. It is not the case in either urban setting that a 6 year old can freely make use of a knife and some matches.

What I am trying to get at here is that in any situation more populated than "alone on 20 acres with my dog", survival skills will necessarily be secondary to social skills. Since current reality is that there is only something less than 2 acres per human (forget about pets!) on planet, social skills rule the school.

IOW, even when addressing most bottom pyramid needs on Maslow's ladder, it is almost always and everywhere necessary to first engage in contact, communication, contract, co-operation and/or conflict with other humans first. Even though my current travels are primarily limited to realm also traveled by Native Americans by foot or canoe in my region 500 years ago, within this realm I find myself in areas of greatly varying affluence and population density, and it seems to me that these are the primary determinants of skills needed for survival in given domain.
Top

One of the interesting thing Jared Diamond noted in his book about traditional societies (and ours) was that in traditional [tribal] societies, sex is practically available on demand whereas food is scarce and intermittent. This is the exact opposite of modern/western society where sex is often restricted to one or zero partners. Interestingly, traditional societies have sex to deal with the frustration from lack of food much like moderns will eat to deal with the frustration from lack of sex. Maslow is thus flipped around and as such seems like a WEIRD construct.

Add: Consider how sexual frustration was used as a lens for psychoanalysis (Freud) in the west. Insofar scarcity determines psychosocial development, what would similar theories look like when/if food is the scarce element (like in hunter gatherer societies)... or intellectual stimulation for that matter (for high IQ outsiders)?
Top

True, and this is not unrelated to the fact that in traditional societies the only overweight (by modern BMI measure) members of a tribe are likely to be fertile women.
Top

Netflix has a show on now called The Creative Brain IIRC. It's not overly informative but it does confirm a lot of the discussion here about how to get better at learning and unlock creativity. Short answer ... keep learning, try new things, and make your brain uncomfortable. They didn't mention models and frameworks specifically, but they alluded to them and how they can be applied in many different disciplines.
Top

Add: Consider how sexual frustration was used as a lens for psychoanalysis (Freud) in the west. Insofar scarcity determines psychosocial development, what would similar theories look like when/if food is the scarce element (like in hunter gatherer societies)... or intellectual stimulation for that matter (for high IQ outsiders)?

For the past few weeks I've been immersed in an honor/shame culture and have been pondering how this influences what people believe are basic human needs. 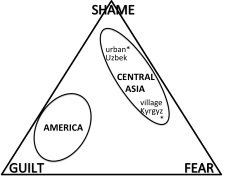 Teaching inner city 6th graders will also immerse you in an honor/shame culture, which is why I tend towards avoiding it. I find Sheriff Andy Griffith like behavior to be the best antidote.
Top
Post Reply
94 posts