--- The smartest, deepest, and most resilient rabbit hole of FIRE
https://forum.earlyretirementextreme.com/

by Crazylemon
@C40 I have never noticed problems with the smell when I have visited (unlike say Venice).
But Paris syndrome exists though to be partly because expectation does not match reality https://en.m.wikipedia.org/wiki/Paris_syndrome

by Ego
For our last three incarnations we traveled for a year then returned and were rehired by the same management company to manage a different apartment building. I started this thread when I was finding lots of good stuff in the trash at the building we were managing in the last incarnation. We just learned that the current manager of the building is leaving at the end of the month. They asked if we wanted to return. Normally we like the serendipity of relocating to a new area but they offered such a good deal we would be foolish to refuse. They will find someone to take over for two months until we return.

Non-stop flight (12 hours) from Madrid to LAX for $202 per person on Norwegian. How can it be so inexpensive?

Well, tell us - how did the race watching go? Where did you spectate? Were you able to find a place that worked for running across the park?

by Ego
We arrived about three hours before the race was scheduled to pass and could not figure out how to get into the Tuileries Garden as all of the surrounding streets were blocked. It was a good thing. We found a spot on Rue de Rivoli where the entire parade of vehicles and chaos passed prior to the riders who passed nine times on their circuit around the park. It was the perfect location. 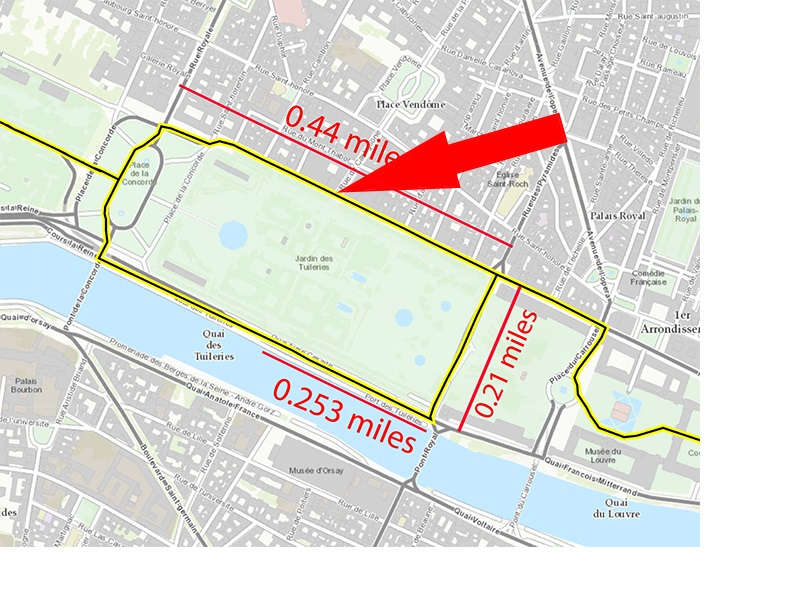 The French rider Alaphilippe who had the yellow jersey for most of the race likes to ride close to the barrier. I nearly clipped him with my gopro. 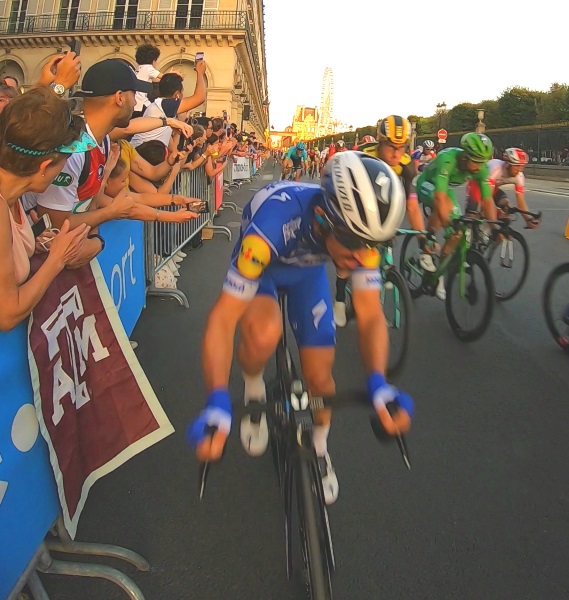 We extended the apartment for another eight days, paid for by the Equifax Settlement. Everyone should check to see if they were involved.

by Ego
Yesterday was free day at many of the museums in Paris. We took the subway (€1.90 each) to d'Orsay. The internet said the line to enter would be 3 hours but we waited only 30 minute. It was crowded but I suspect not much more so than a regular day. We wandered through the Impressionist gallery and saw Renoir's Bal du moulin de la Galette. Later we sat in the lawn chairs in the shade at Jardin des Tuileries and enjoyed a picnic lunch of leftovers. Afterward we headed over to Musee de l'Orangerie for Monet's water lillies.

We decided to walk home and took a shortcut through Jardin du Luxembourg where a group of about a hundred friends dressed in period clothing were talking and impromptu dancing under the gazebo. We sat for an hour and just watched. It felt as if we had been transported to the 1870s. 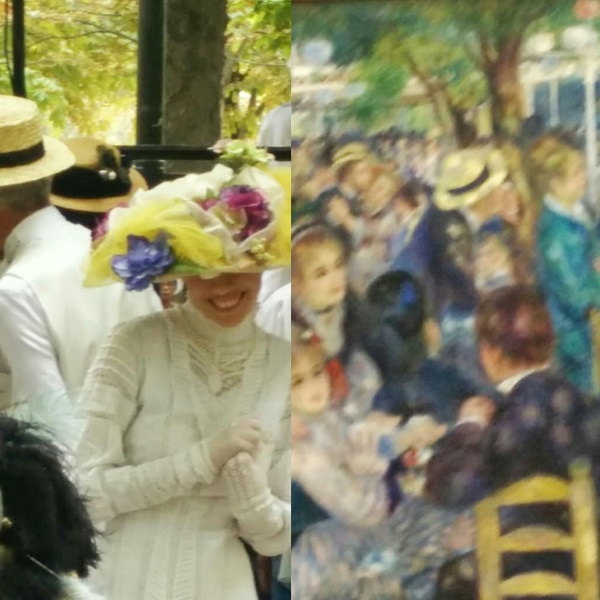 The painting is said to be something of a celebration of the public parks build by Napoleon III who was the first elected President of France. At the end of his term as President he declared himself Emperor of France and ruled for another nineteen years. It was during his time as Emperor that he created many of the institutions of modern France . History is never simple.

by Ego
I saw this video of a reading of Richard Feynman's love letter to his wife.

It made me mindful of the fact that the most valuable things we have are relationships and how important it is to partner with someone who is equally determined to make something great.

Would your take on letter change if you knew that Feynman was kind of notoriously polyamorous before polyamory was cool? A good friend of mine who grew up in his father's physics lab used Feynman's known behavior as his excuse for making strip clubs his 3rd place.

by Ego
Hah! Not sure what to make of the new information.

by jennypenny
Didn't his wife die young? Maybe he kept looking for her in other people?

7Wannabe5 wrote: ↑
Fri Aug 16, 2019 1:49 pm
A good friend of mine who grew up in his father's physics lab used Feynman's known behavior as his excuse for making strip clubs his 3rd place.

It's a poorly kept secret that it was originally referred to as "G-String Theory" before sanitizing it for the scientific community.

by Ego
We've seen a lot of scooters that have been fished from the Seine like this one. They actually have a team of divers who patrol the edge of the river searching for this kind of stuff. 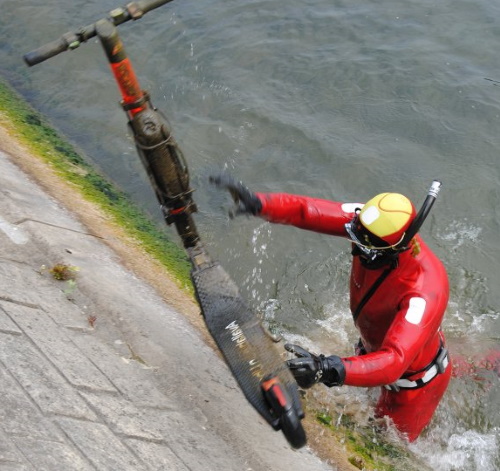 It got me thinking. These scooters must make it into the waste stream. Anyone have any insights on getting them and repairing them?

Mrs. Ego got her motorcycle license during our last incarnation and we bought a Vespa-style gasoline scooter which we sold before leaving. I was debating purchasing one or two of these electric scooters for the next incarnation since we have free electricity. I'm also considering one of the unicycle scooters because they have a longer range and are faster.

Does anyone have any experience with these.

No direct experience. I’ve often wondered what keeps people from stealing the ones I see on the streets of LA and cannibalizing them for parts. I wouldn’t want one that was dunked...for the same reasons I’d leave a phone or car with water damage.

So the scooter will have a lithium battery. A motor possibly brushless DC. A speed controller. A main controller to handle cellular radio, gps, security functions.

What made me wonder about the things is it probably would be easy to find a way to remove the custom controller and replace it with a hacked version or just bypass it to create a personal scooter. I should search before saying this because it seems like the obvious hacker activity.

A long time ago I worked with some of the SW to repurpose those disposable digital cameras as personal digital cameras. The idea was you bought the cheap subsidized camera and instead of turning it in and getting prints back, you just kept it and downloaded your photos to your PC and never looked back. The problem was the manufacturer and picture processor expected to get the camera back and resell it multiple times. The hackers destroyed their business model. I bet there is a group of people already doing this to the scooters.

The scooters look vulnerable to something like that. I hear there are junk ones all over the place in some countries. China comes to mind. Because these businesses are Venture Capital money burners they may survive some loss. That is, reality will take some time to catch up with them like Uber which is an extreme case.

So if I were about thirty years younger I’d go find one. Disassemble it and disable the gps. Take it home. Follow the circuitry from the motor back to the controller and figure out just what needed to be removed and replaced. My gut feel is the device outside of its security and gps is no more complex than a good quality remote control toy car. The real technical contribution of this thing is the mapping, tracking, accounting, social media and security software required to make it into a business.

In LA apparently they hire a bunch of wranglers to help collect up the units left in random places with dead batteries. It’s kind of a gig job to make a few dollars.

Edit- like. Usual I typed too soon. I like how these scooter companies say they have custom hardware that is harder to hack. Yes, but this is not rocket science. It just raises the barrier a bit. If they aren’t designing their own battery and motor they’re still vulnerable. The hack will just be more sophisticated than buying a Chinese kit and connecting the plugs.

by Ego
@sclass, thanks for your insight. Funny, I knew you would have done some thinking on this.

A few cities in SoCal have outlawed electric scooters and dockless bikes. When someone from an adjacent city leaves one on the streets, municipal workers impound them. I wonder if I could get my hands on one of those impounded scooters.

Also, I thought they make them fairly waterproof. Are they not submersible?

by 2Birds1Stone
Woo, this is a fun topic.

I recently purchased my first personal electric vehicle, in the form of an eSkate board. Have been reading/watching a ton of YouTube videos re: electric unicycles, which seem much more versatile and practical for transportation due to the 14-18" wheel.

My board has an 8Ah battery pack, and 2 x 540 watt brushless hub motors. It's controlled with an ESC via radio remote, and has a built in BMS (battery management system) to prevent over charging, and to balance the cells in the pack. I have had it for something like 2 weeks now, and it's a LOT of fun.

The unicycles freak me out because if you lose power or the gyros suddenly malfunction you could be dead, where the skateboard will just ride like a normal unpowered board.

2Birds1Stone wrote: ↑
Fri Aug 23, 2019 1:42 pm
The unicycles freak me out because if you lose power or the gyros suddenly malfunction you could be dead, where the skateboard will just ride like a normal unpowered board.

The unicycles seem to be getting very popular very quickly. I agree about the safety concerns. They are fast 60kph and have a range of 100k. A couple weeks ago I met this guy while we were running. He rode along next to us over cobblestones and we had a nice conversation. He started in Netherlands and was headed to Lisbon. He recharged in cafes at lunch and again with his couchsurfing host at night. He carries a solar setup for camping but hadn't used it yet. 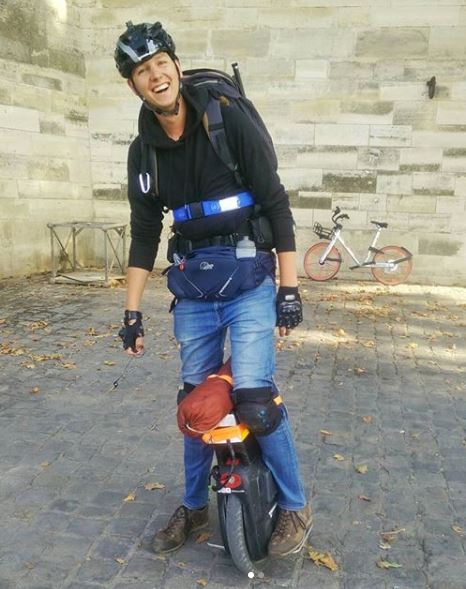 by Ego
After a few long days of walking with a heavy pack on the Camino de Santiago Mrs. Ego got a few blisters so she made insoles from a cardboard box. I was skeptical but they seem to have solved the problem. 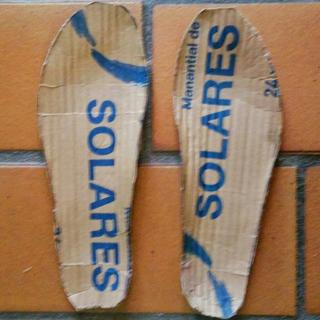 by jacob
Not sure if this is now Ego's journal or still the something from nothing log, but I made some marking tools out of scrap wood. 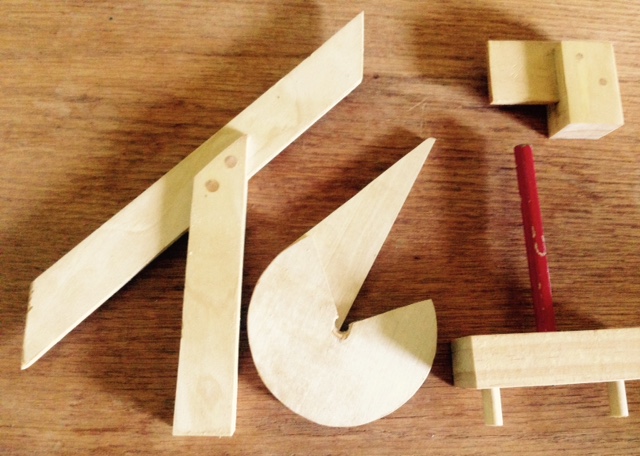 Usually, I convert my scrap wood into toys for xmas gifts, so this was a nice change in pace.

by Ego
I found a ball of Cat9 cable rolled up in a corner of the basement along with a D-Link wifi router. Ran the cable from the office a hundred feet though narrow crawlspaces and up a vent shaft to get the internet to our apartment. I checked the cable before running it but when I got it in place and connected the router..... nothing. No signal. WTF!!!! So I went back and ran a second line. Free internet. 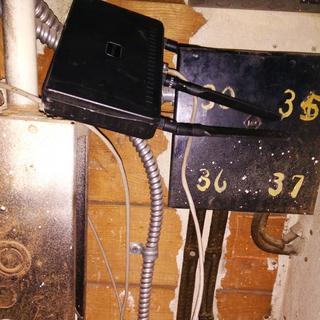 by Ego
Before leaving last year I unsuccessfully tried to sell an old Rimowa aluminum rolling suitcase I bought at the swap meet for $5. It was too big to store so I hid it in the crawl space beneath the building and forgot about it. The other day I found it while laying the internet cables, listed it on Craigslist and sold it to a guy who drove all the way from Orange County, for $110. 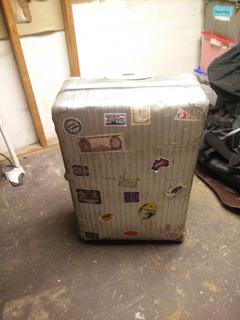 We used those funds to buy our guest bed 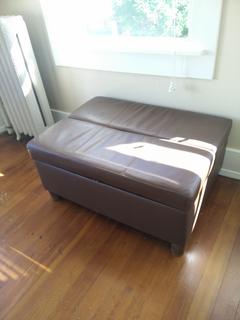 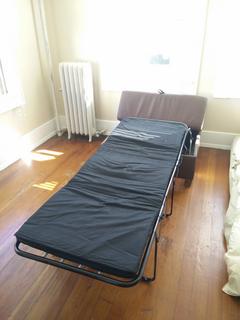 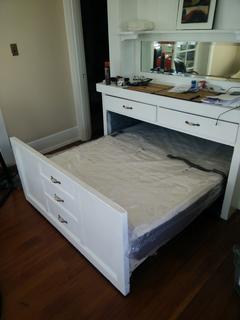