What skills to learn, what tools to get
Post Reply
789 posts

My onion seedlings were yellowing. Figured they had enough water (and not too much), so gave them a shot of balanced fertilizer. A few days later and they're looking much better. Note to self, I need to watch that!
Top

Territorial Seed is taking orders again as of last night. They're out of Tufflight greenhouse film, but do have 10' long fleece tunnels.


PLEASE UNDERSTAND THE FOLLOWING BEFORE YOU ORDER:

I've got a lot of seedlings coming up, mostly herbs but also some tomatoes, kale, and chard. Waiting on peppers and some others to come up since they haven't been planted that long and it is still cold. They are in a warm window with no electric light or heat, upper Midwest US, so doing better than I expected. I may invest in some lights etc next year.
Top

Harvested the first couple of banana peppers of this season, which have already been used in the kitchen by other people

. Now I am waiting for the rest of my garden to start producing, mostly tomatoes, squash, and okra. Our corn row is growing like wild fire, even though we just planted a month ago. So I might be harvesting sweetcorn by July 4th. Honestly should have cleared out more space for the corn.

The only adjustments I might have might to do to my garden at the moment is pull out the summer squash plants in my raised beds as they seem sickly and won't be growing any fruit. However the tomato seedlings from when my mom just tossed a rotten tomato into the garden is doing well. Which in that case, I might get some five-gallon jugs, drill some holes, and transplant seedlings in them. Will help to have tomato plants that have grown from seedling that are adapted to the area to harvest seeds from. Also I last minute decided to plant some onion seeds into the ground, see how they do in the Texas weather. They are in shaded areas under a tree so they might be able to survive. Dug three trenches for them.

The pepper plants from seeds are sadly not growing. Might need to thin them other, however I imagine that plants have drowned under immense amount of rain we got in late March and most of April. It sucks but that is life. I can probably reuse the dirt for the compost pile alongside other dead leaf litter.
Top

Today's minor gardening effort, apart from keeping the raspberries in their patch and eliminating a few weeds, was to transplant baby Walla Walla onions. See, I've threw the seeds in a small area to sprout and that they did, so now I'm moving some out of the patch and into rows. Figure I'll wait to see that these first 20 have a decent survival rate before I do any more as they're still small, smaller than the onion starts you get when ordering online.
Top

Second attempt at starting squash plants will hopefully end better than the first, where I let the thing cook in the sun without water (sigh). One of the seedlings is beginning to pop up, so I brought them inside to avoid freezing them.

From light frost this morning, we reached 68F and tomorrow is supposed to be warmer by 4F. Have had a few good moments of sitting in the garden and reading books yesterday and today.
Top

I'm hoping to plant my pumpkin, cucumber and squash starts in the next few days. They've gotten really leggy inside as I didn't realize I needed the light to be much closer. Learned something already. Going to plant squash seeds too and see if there is any difference in growth and harvest between seeds and starts. The basil and tomatoes are still too small to plant outside, but I'll get beans planted this weekend too. I've got good looking lettuce and arugula that I'll be picking in a week or two. The beets are tiny and I haven't seen any carrots popping through yet. So far I've done better than every previous year with gardening, though it's early enough I still have plenty of time to lose interest.
Top

Moved my pepper seedlings to a place with more sunlight to help them grow; if I can get the plants to grow by the end of this season I would be proud of myself by growing peppers from seeds harvested from common produce.
Top

Everything is planted. Unfortunately it's supposed to get very cold this weekend. Fingers crossed that covering everything (haphazardly) will be enough. Normally, losing some plants would be an annoyance. This year is could mean more than that.
Top

https://imgur.com/a/pjQ3zPv
Sorry, the image upload failed, I will try again.

Hopefully this one works:
https://postimg.cc/gallery/w6zMCnV
Top

The unusual cold weather in May has stunted growth. Its like all my vegetables this May are not dying...but they're not growing either. And I'm having trouble getting some things to sprout.
Top

The Johnson-Su Bioreactor looks like an excellent way to make fungal-rich compost. However, I don't have enough material to fill the large size compost bin. I wonder if there is a smaller version.
https://regenerationinternational.org/bioreactor/
Top

Grazed on pea pods (finally!) and plucked a handful of early potatoes that were boiled. I know I'm not planting potatoes on purpose, but these were some volunteers I moved out of the way and crossed my fingers that the little bugs wouldn't worm their way into. Several green tomatoes are just waiting for warmth, but I think nothing will turn red before July.
Top

The PDF instructions on the site say you can scale it down but don't give any more detail other than the materials should never be more than a foot from air. Maybe a 55 gallon drum sized version with one pvc tube in the center? Composting seems to work better with more mass though.

A few things concern me about this design. One is that it says it still takes a year to process materials. Another is that the instructions don't show how to get the compost out. I'm guessing you disassemble it and then have to rebuild it.

I'd like to get a drum composter so I can spin the compost instead of turning it. My current set up is a struggle to use.
Top

The good news: I now have a pet groundhog!
The bad news: He has eaten the leaves off of all my kale plants, every one.
Top

Ha! Now that the hawks are gone, we have three rabbits (or one rabbit in three different sizes) who really like swiss chard and peas. I hope they're paying food and rent back in fertilizer.

I finished 80% of two beds with trenches. That only leaves 312% more to do but the work is waiting for the existing system to turn over. I should have thought of this before rather than a few weeks after planting.

So far we've harvested 21lbs of mostly greens this year.
(I only weigh the edible parts.)
Top

That is impressive!
Top

Yesterday afternoon I removed a blue Agave plant my dad planted forty years ago. It was a tiny thing then and he said “hey Sclass, this is where Tequila comes from”. I think he stole it from some landscaping in LA. As of yesterday it was a towering 8’ monster with multiple spears to defend itself.

It is a really tough and fibrous cactus. I discovered my little cordless chainsaw went through it like a hot knife through butter. I was really proud of myself after I leveled the spiked beast in minutes without a poke. Then the most painful sensation on my skin set in. Any exposed skin felt like thousands of needles were jabbing me. It sent me running for the shower and some dish soap.

I’m lying in bed a day later covered in red raised bumps. Now I get a chance to search it and I find dozens of identical stories online about how some hapless homeowner got the agave juice on the skin while chainsawing and ended up covered in painful rash. I look like I have measles or Covid complications.

Cut blue agave in full PPE. Gawd...I called my dad the day before I cut it and he said, “hey don’t cut my cactus, it can be used like Aloe Vera on your skin.” Hah! Phooey! 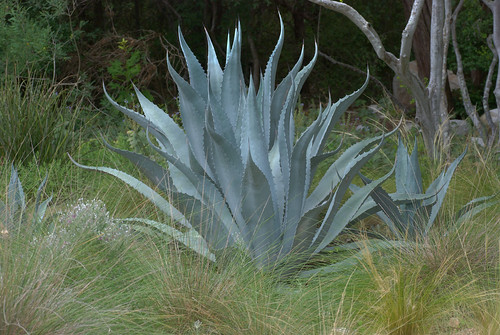 @sclass - oh dear, that sounds painful, I hope you feel better today! My husband had a similar experience yesterday, he ripped out an estimated 50 kg of thistles from one of our meadows. He wore gloves and and stuff but he still looked like he lost a fight with barbed wire. Plants can be pretty badass, that's for sure!
Top

Yikes! I can commiserate since I once used a weed whacker on a patch that included poison ivy.
Top
Post Reply
789 posts