I have a 2x8 joist in the basement with significant notches/holes due to plumbing/electrical. Actually already two 2x8's sistered but the damage is bad enough that it should still be repaired.

I already have several 2x6s and some bolts to sister-in. I don't have a 2x8 or a vehicle to transport a 12' board from the store, so I'm hoping to repair sufficiently with the 2x6 boards.

Would you:
1. Sister-in the 2x6 to reinforce the 2x8s and have a 1-3/4" gap and call that good enough (easiest)
2. Rip a second 2x6 to 1-3/4", attach in parallel to a 2x6 to effectively make a 2x8 to sister in (sounds good but may be difficult for me to rip well enough for a snug fit)
3. Sister in 2x6 along the floor and just make short pieces of 1-3/4" to fill the gaps at the rim joist and load-bearing beam
4. Attach 2x6 boards laterally to spread load to other nearby joists, perhaps in combination with a sistered-in joist?

I'm thinking #3 would be the best combo of easy & robust.
Top

Lucky - sorry to hear that your having this issue. My advice is to have a 2x8x12 delivered or find a way to strap it securely to your car roof. You really don't want to jury-rig a fix on a load bearing joists - especially if it's handling a significant load (heavy furniture, traffic, etc.). Before sistering the joist, I would move as many lines (electrical, plumbing, etc.) as possible so the joist can be notched properly. Then I would glue and nail the new joist to the old joist. I would then proceed to notch out the sistered joist to accommodate the electrical and plumbing, mechanical lines.

Do you use the basement? If not, maybe vertical supports like jack stands and pillars?

An earthquake retrofitter installed a bunch of these 4X4s under the saggy joists in our basement years ago. 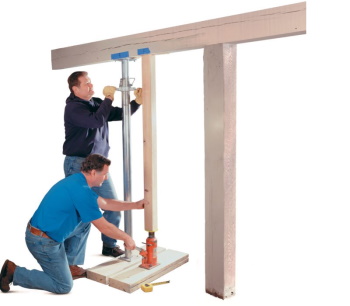 You can always double sister the joist also if you want with the 2x 6's, one new board on each side of the damaged joist. It would save you a trip to the lumber yard and it's always been my experience that " the same size" never fits properly anyway due to wood shrinkage and unevenness. Glue it like Campitor suggests but instead of nailing use these drivable lag bolts, https://www.lowes.com/pd/Hillman-5-16-i ... ew/3342800. You'll need an impact driver but man do these really snug up any unevenness. And yes, the screwing pattern matters for maximum effectiveness. Look at Campitor's link.
Top

The big notch is actually not used for anything currently. Not sure why it was originally cut. There is also a hole that the electrician drilled vertically through the joists to run a wire but thankfully since it is at somewhat of an angle through the two sistered 2x8s most of the meat is still there. The notch has been there for who knows how many years and the hole was drilled last year (noticed only recently). Also on one side it is already attached laterally and there would only be space to add a joist to the other side.

So the new board does not need to be notched in any way and the existing notch can also be reinforced from underneath such as with a metal strap. Finally there is not a heavy load above this part of the house and there never would be based on how the house is laid out. Based on a quick look calculators/joist span tables, with 16" spacing a single 2x8 is good for roughly 14' and a single 2x6 is good for almost 11' (I know, depends on species and load...). So considering the unsupported span is about 11', a single 2x6 could almost cut it on its own especially since the next solid 2x8 is only 13" away. With the other two 2x8s (effectively more like 2x4s now) I would think there would be a decent safety margin for all these reasons.

I have the good lag bolts in hand already.
Top

I have a 2x8 joist in the basement with significant notches/holes due to plumbing/electrical. Actually already two 2x8's sistered but the damage is bad enough that it should still be repaired.

Um, why are you doing anything?

If what is there is working, don't mess with it. If it's not, don't half way fix it.

The goal of sistering is to avoid cutting out the damaged member, not to couple insufficiencies.

If this were not under an interior wall, and the plumbing/wiring are not currently going through, I would just cut it out, and replace it with a new 2x8.

But at some point, someone is going to look at it and wonder why a 2x8 wasn't used. That person could be a buyer, or insurance adjuster.

What will the savings of a trip and $10 cost you, then?

How long is the walk to the lumber yard? Can you make it a replacement workout?

It's just a 2x8, up on your shoulder, and a walk, and a story afterwards that makes you look like a guy who gets it done, and done right, and allows nothing stop you. Worth it for the story...
Top

Allow me to provide an electrical analogue to explain my thought process, which may or may not make sense for this since I don't know what I might be missing from a structural engineering perspective.

If I had a 15A circuit that I was at risk of tripping if I ran too many things on it at once, then sure it works for now but it would be better to lighten the load and never risk overloading it. If it would be a pain to replace the 15A breaker with a 20A breaker and 14 gauge wire with 12 gauge, I would much rather just run a parallel 15A line to a couple of the outlets to lighten the load - especially if I already had some 14 gauge wire on hand. While each circuit has a lower maximum load than a 20A line, this would ultimately allow for a greater total load across the two lines, assuming the load is at least somewhat balanced across the lines.
Top

So then help me understand why you think this joist is "at risk of tripping" and what you think a solution would look like.

Is the floor flexing more that you like? Are you trying to stop squeeks? Are you just concerned that it looks bad?

What is the problem you are trying to fix?

I understand that it looks bad, and seems weak.

But there are many ways to address this. Picking the most effective, means knowing more about your reasons for wanting to address it.
Top

I was thinking about this a bit more.

If all I was trying to do was make up for the loss of strength/stiffness of a badly drilled out and notched joist, I think the best solution would be an epoxy putty.

Sistering in a 2x8, as I suggested above, is going to involve a lot of brute force. You would be trying to get a rectangular shape to flex enough to enter at an angle, because there is generally no way to get it in straight. (This assumes the joists are on hangers, rather than resting over the beam.) So often the floor would be squeekier after the work, as nails loosen slightly.

But if your joist is flexing because of notches, filling those notches with something hard, like custom cut wooden plugs, glued in place, would prevent the flex, without the stress to the structure that joist replacement would cause. But it would still look funny, to a later observer.

For the same effect, without the custom cutting, packing the holes with epoxy would do the same job.

But still look a bit funny. So it still comes down to why you are doing the job.

Whatever you decide, post a pic of your work. Others will be in the same situation, and pictures are worth a thousand words, and all that.

Thanks for the thoughtful response!

Why bother doing anything? Generally I was concerned that there will eventually be a crack or sag... maybe not today but in a decade or two. And I figured the fix I had in mind would be pretty easy and could only help it, so why not.

I would have to take measurements to see if there is existing sagging. There doesn't seem to be a squeaking issue currently but good to keep squeaking in mind to not introduce one with the fix.

The joists are resting on beams, which is why I figured a 2x6 against the floor above, with additional pieces to fill the gaps between the bottom of the 2x6 and the beams, would not only be easy but would effectively act like another 2x8 with a long 1-3/4" deep notch along most of the length - again not ideal but combined with existing joists has a lot of strength total.

Filling the notch or adding a metal strap underneath could be a good belt and suspenders solution.
Top

So you don't have a problem you are trying to fix, you want to prevent a potential future problem.

In that case, I would go with the least invasive solution. I would make a loose fitting peg (or dowel) to fill the drilled out hole, use the peg to pack in the epoxy, and cutt it flush after it sets. I would make a wooden plug, and treat the notch the same way.

Think of this a a geometry problem. If you sister a 2x6 in the way you suggest, you are adding another member to take the load. How tightly you fit it to your subfloor decides when it starts to share the load. Any gap has to be bridged before your new joist begins to pick up the load.

If you nail and or glue it to your existing joist, it will begin to share the load immediately, however it would be strength added to one side, and as it took up load, it would apply a twisting force to the existing joist. Over time, this is likely to install a squeek for you. The twisting motion will loosen nails.

Filling the gaps, gives the existing wood something to compress against to resists the load. That's why you want to fill the gaps with something with at least as much compressive strength, and ideally very good surface contact. Wood glue and epoxy both fit that bill, but a putty allows for more gap filling. So your plugs don't have to fit as tightly to do the job.
Top

Thank you for the explanation of the issues with my approach. I'll focus on just repairing the notch as you described. There are another couple notches which are less severe elsewhere that can be repaired the same way too.
Top

Glad I could help.

Overthinking structural issues is what I do.