I've never been a fan of gold, maybe due to my dislike for all things shiny. However, few FIRE bloggers made some good arguments for having a small allocation to gold with the purpose of living off it during bear markets due to its negative correlation with equities.

So I looked up an inflation adjusted chart of gold covevring last half a century: 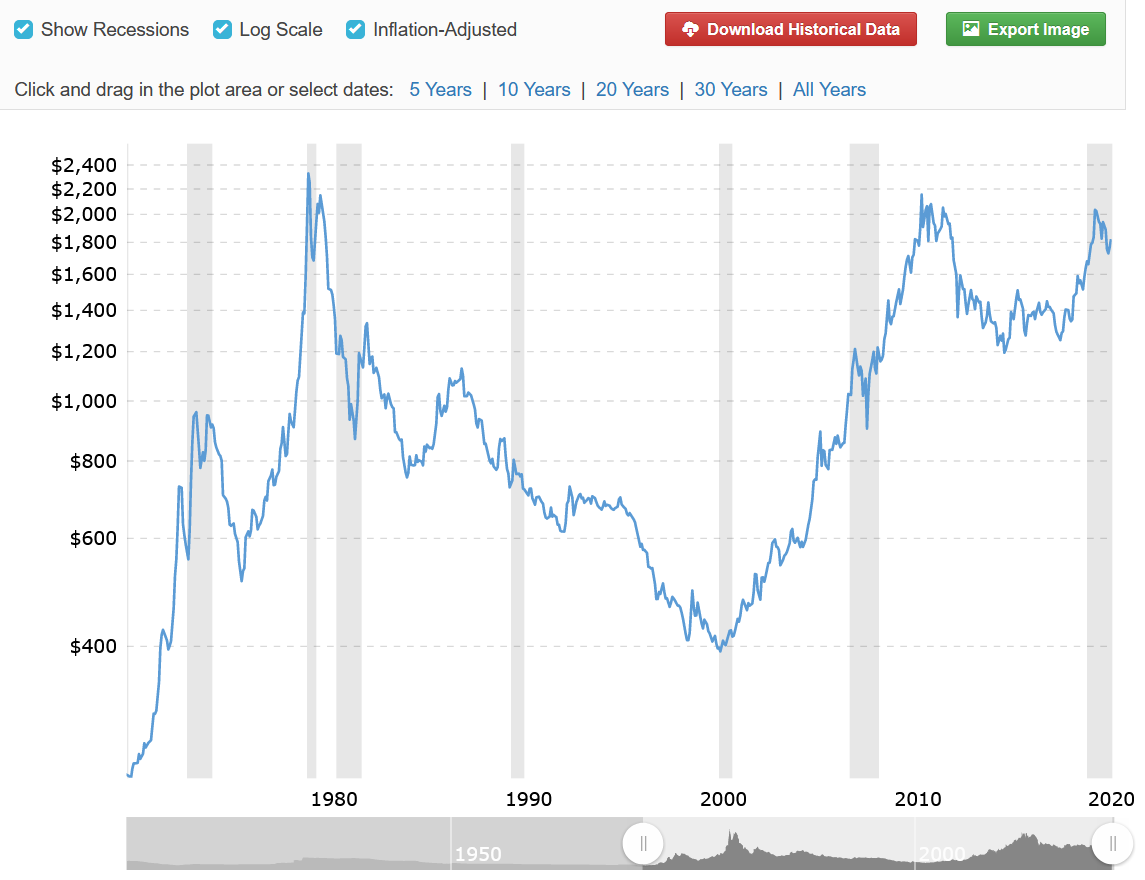 These are not very impressive returns especially considering that all the gains were frontloaded in the 70's. Real returns over very long term (last 2 centuries) are even worse - 1.1% real. At the same time gold is very volatile with multi-decade bear markets and high-double-digit drawdowns. Where it shines though is during stock market crashes in both UK and US: 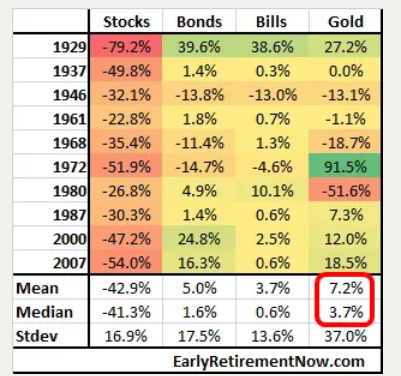 
This table from ERN makes a convincing argument that even a relatively small allocation to gold at 5%-10% noticeably increases SWR compared with baseline 75/25 portfolio: 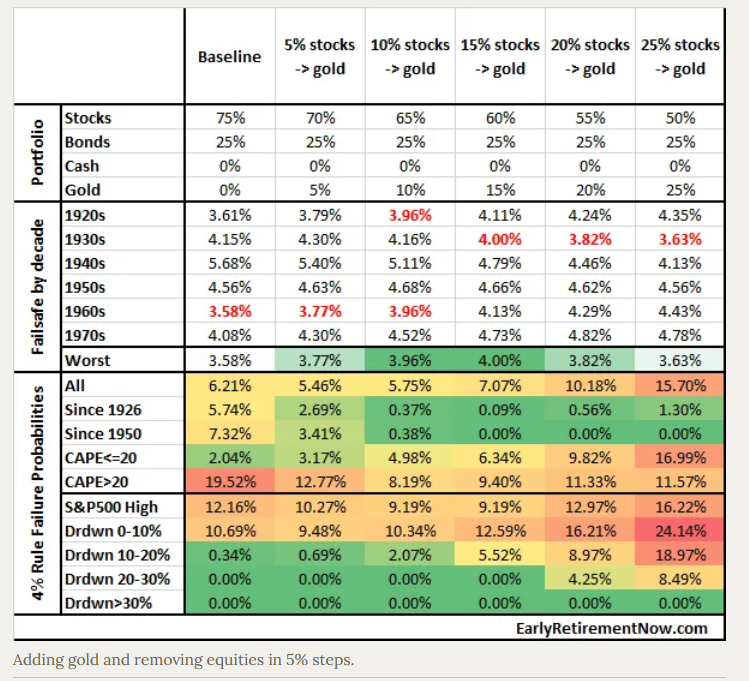 All in all, I'm not convinced that holding a large % in gold makes sense due to its equity-like volatility combined with very low real returns. However, a small allocation might help with SORR, IF gold will continue to be negatively corelated with equities and act as a 'safe heaven' during and after market crashes (who knows maybe bitcoin will be the next 'safe heaven'). If we are at the beginning of a new cycle and multi-year long bull market in stocks, gold will likely do badly as it did in 80's, 90's & 2010's, which is fine since in that scenario equities would compensate. It's also close to ATH in real terms, so it might be quite dangerous to buy now. On the other hand, US equities are expensive so a decade of poor returns is possible, which should benefit gold if history is to repeat. And the chart looks like it's about to break out of 40-year long cup & handle formation. It seems to makes sense to hold a bit as an insurance vs. SORR. I'm leaning towards 5-10% with the plan of drawing from it during the first bear market after retiring, and never buying more once it's gone. A 10% allocation (almost 3 years of expenses) should last good 4-5 years if there's an increase in price due to panic and combined with reduced expenses.

Is a small allocation in gold almost a no-brainer from SORR perspective considering high equity prices and poor outlook for bonds/cash? Or am I missing something and it's too good to be true?
Top

Gold does serve an important purpose in many portfolios like Permanent Portfolio, Dragon Portfolio, and Golden Butterfly. We have threads that talk about most of those strategies.

It’s interesting to see some FIRE bloggers coming around to the fact that there is more to the investing world than stocks and bonds. The assumption that stocks and bonds are uncorrelated only holds true in a bond bull market, which we’ve been in for the past 40 years. There isn’t much lower for interest rates to go in the developed world so that may be over.

I’d recommend reading Chris Cole’s Allegory of the Hawk and Serpent for an explanation of how gold can be useful as a hedge against fiat currency debasement. If you’re only looking for something that is non-correlated to stocks, then there are other options out there (among them things like Commodity Trend Following, Active Long Vol, maybe even uranium).
Top

Sorry for the OT, but how does one own uranium? Anti-terrorism squad in my country arrested 2 people affiliated to a religion that has nothing to do with terrorism 10 days ago for possessing 7 kg uranium of 90% purity.
Top

fiby41 wrote: ↑
Fri May 14, 2021 1:45 pm
Sorry for the OT, but how does one own uranium? Anti-terrorism squad in my country arrested 2 people affiliated to a religion that has nothing to do with terrorism 10 days ago for possessing 7 kg uranium of 90% purity.

Good question. My understanding is that physical ownership by an individual is illegal and impractical in most places. However, there are numerous Uranium ETFs that track miners, producers, and holders of uranium (or a combination of the 3).
Top

See the story of David Hahn, the American boy scout who built a homemade nuclear reactor in his parents garden shed. Radioactive isotopes were frequently used on old glow-in-the-dark clocks from the 1960s and smoke detectors and various other sources:


With his newly made neutron gun, David was ready to irradiate things. He could have easily turned non radioactive elements into radioactive isotopes, but that was too simple for David...To acquire the uranium, he phoned a Czechoslovakian firm that sold radioactive uranium ores, posing as a college professor. The firm did not question his credentials, and mailed him the uranium. He also created uranium-233 by using his neutron gun on thorium, which he collected from old camping lanterns

I think I saw a documentary on him in the winter of 2000, it's quite a tragic story how he ended up.

But back to the OP, jewellery and antiques might be another angle on this if you are looking to diversify a bit I think that's either hobby investing or doomer territory.
Top

Using gold to dampen portfolio volatility seems silly because I can become desensitized to volatility. Gold as a store of value does not make sense to me because of the %30 collectible tax. Gold as as an insurance policy against war does makes sense to me because it can be buried in the backyard and dug up once the bad times are over to help finance the recovery.
Top

Bankai wrote: ↑
Fri May 14, 2021 12:29 pm
I've never been a fan of gold, maybe due to my dislike for all things shiny. However, few FIRE bloggers made some good arguments for having a small allocation to gold with the purpose of living off it during bear markets due to its negative correlation with equities.

What exactly are you trying to accomplish?

Stock market bear markets occur for two main reasons: (1) the business cycle and (2) inflation. The 1960s-70s is an example of #2 where stock market performance essentially flatlined for two decades. For #1 an allocation to cash/bonds would be sufficient to weather the downturn. For #2 the people that did well were those that were in real estate. For ERE it would seem the best approach to deal with #2 would be to own your own home and have a fixed price mortgage.

I am not sure what purpose gold serves.
Top

The top local bureaucrat is marrying off his daughter. The insolvent local Police, Firefighters, Teachers, Bus Drivers, Janitors, Garbage Collector and YMCA Lifeguard Pension Fund must be recapitalized. The local library must also be restocked with books extolling the virtues of the newest collectivist theory.

An involuntary tribute in the form of a tax on your property has been gratefully accepted. Our new centralized digital currency has made this tribute automated and seamless.

No further action is required.
Top

Does anyone here think about the possibility that we are a species of sentient beings engineered by aliens to covet and collect shiny things including precious metals and gems and the earth was seeded with us to extract all the resources so that aliens can come back in a millennia and conveniently collect all of the shiny things from vaults in centrally located places around the world?

Gold, like other assets where long term real return is around 0% but volatility is high, is useful for an active trading strategy. Same as silver, oil, and all the other commodities that can be traded with high leverage via futures contracts.

You would never time the peaks and troughs perfectly with an active strategy, but you would also never ride gold all the way down from the early 80's peak to the 2000 trough, for example. Fundamentally, you would see around 1982 that interest/inflation/gold was at extreme highs whereas stock valuations were at extreme lows (and 2000 you would see the opposite). Technically, you would exit around the beginning of the bear market in the early 80's, and you might get whipsawed a couple times in the 80s, but in the 90s it would be easier to avoid it while it stayed in a narrow nominal range / downward inflation-adjusted range.

As it turns out, equities and bonds now have around 0% real expected returns, with perhaps more volatility than usual coming in the next few years (but maybe not). To me this means that it now makes more sense to also apply an active trading strategy to equities (and bonds if you like) rather than buy and hold, as well as actively trading all the commodities to capitalize on the decent odds that we are now in a multi-year commodities bull market.

Gold has just recently crossed positive technical thresholds after gold ETFs had recently experienced record outflows over the winter and spring, so sentiment is still poor but now improving. Fundamentally, it has been strong all along as an inflation hedge (and overvalued stock market hedge), and recently there has been more inflation news backing this up. However, valuation-wise, gold is more "expensive" than silver or oil if you look at their historical ratios to gold. Therefore I think it is appropriate to be long a diversified basket of commodities right now (and not short any commodities given the current inflation situation), as well as being active and defensive about equities (reducing allocation, employing a technical sell signal when the time comes, or hedging by being short some grossly overvalued & declining equities).

Buy & hold simple stock/bond portfolios might even peak in popularity as boomer retirement accelerates leading to outflows and the younger generations being less interested in that old fogey way of investing. If we get to the point that everyone has a decent allocation to gold, rates & stock valuations are at a more historical norm, and magazine cover stories are about the death of the traditional retirement portfolio, then it will be safe to go back to the simple life of a passive stock/bond index portfolio.
Top

Physical gold is a useful asset to hold, not for investment purposes, but for insurance against a complete loss of trust is the global fiat money system.

If that happens (which may not be many years into the future given the rate at which government debt is mounting up), the world's central bankers may be forced to introduce a new global currency (something like SDRs) backed by gold to regain confidence.

All cash holdings would be worthless, bonds likewise and equities deeply damaged. 5-10% in physical gold would cover the losses in the rest of your investment portfolio.

The works of Jim Rickards are useful to consider in this context. He writes about a mixture of global finance and geopolitics.

It would be interesting to hear the views of the physicists about his work as many of his forecasts are based upon tools such as complexity theory and future path likelihoods.
Top
Post Reply
12 posts • Page 1 of 1