naturelover wrote: ↑
Fri Feb 14, 2020 11:46 am
It seems to be I have the mental fortitude to push through an intense interval training or heavy singles in weightlifting but the kind of sustained endurance for ultra marathons is fascinating to me.

But then again I'm a bundle of fast switch muscle fibers so everyone is better at different things.

Good on you for still having that mental fortitude for interval training. I did some recently and ended up cursing up a storm upon finishing

File this under, "You can't always control what happens, but you can control how you react."

For weeks I've been working up to a Murph a day, without the weight vest. I was back to four sets of pull-ups (32/26/22/20) on alternating days until the pull-up bars were fenced off at the park. I've been doing two or three sets of pushups every morning (80/65/(45)) as well as abs, but I've been lazy with the squats and rarely do more than 100. Now that the pullup bar is gone, squats will be my focus and I am shooting for a regular morning 300 by Memorial Day. I also use my TRX every other evening in one of the vacant apartments and alternate that with weights (I bought a set of Powerblocks).

For cardio I am alternating daily 10K run and bike. This morning I rode around the bay and returned by the free commuter ferry with one other passenger. I've been using my tank-like expedition bike as my road bike needs a bit of fine tuning. 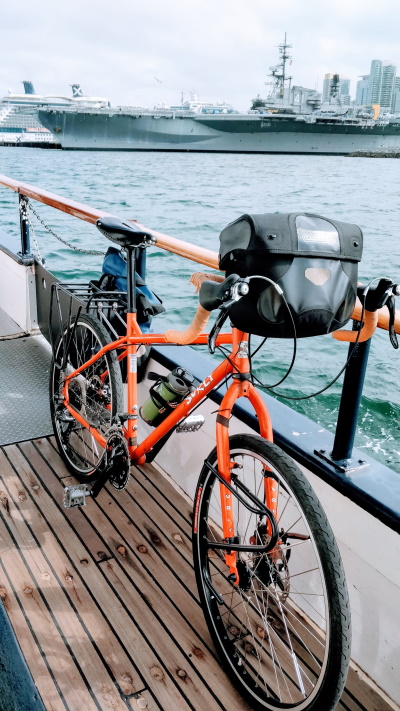 Diet-wise we are killing it. 10AM green smoothy breakfast. 3PM big salad & meal. Most days since the start of Covid I've kept the eating window under 5.5 hours and rarely over 6.5 so intermittent fasting is going well.

If nothing else I am determined to come out of this Covid-19 mess in good physical condition.
Top

Some friends and I have been competing with each other in doing fitness challenges. So far we've done:
-Max burpees in 30 min
-200 Pull ups for time
-1000 air squats for time (absolutely killer)
-breath holding

I think handstand pushups is next.
Top

Animal, thanks! Just about any one of those competitions would put me out of commission for a few days. 30 minutes of burpees is just

This Murph workout sounds exciting! I'd need to build up pull-ups and squats before even attempting to finish below 70 minutes time cap. Should be fun challenge for summer.
Top

This Murph workout is no joke. I did the middle bit today (pullups, pushups & squats) in just under an hour but running 2 miles on top of that would be murder, never mind in 10 minutes. wonder what split is best for achieving the best time? Today I did the recommended split of 20 sets of 5/10/15 but maybe going to almost fatigue on each set is better tactics as it minimizes the overall number of sets and total rest/downtime. On the other hand, with this kind volume you want to keep fresh for as long as possible so going full fatigue might be counterproductive. I'll need to experiment with various options and get my cardio up but I'm definitely hooked on completing the whole thing within 70 minutes limit this summer.
Top

For those who are homebound or can't/don't want to run, I sometimes substitute the 1 mile run with a set of ~50 burpees on either side (100 total). You can adjust the number of reps to whatever your level of fitness is.
Top

I lift weights every day. And because I have a home gym I am not impacted by the corona virus. But I injured myself about a month ago when I was building up to a 1 RM deadlift. I had been doing deadlift at home for about 2 years but since I can't risk doing 1 RM deadlifts in my appartment I went to a gym for that. However due to my setup at home the bar path is maybe 5 cm longer at the gym. Enough to hurt me at a weight that is only 'medium' to me. This injury ruined my squat and barbell rows. I had to switch to doing exercises I never did before: lunges, good mornings, stiff legged deadlift and pistol squat. Ultimately I am happy with this. I was always worried about the long term effects of the spinal compression I experienced from heavy squats. And heavy deadlifts seemed like an accident waiting to happen. I also stopped doing bench press and am doing heavy dumbell flies.
Top

Sorry to hear about your injury. You might want to reconsider 'good mornings' - they are often recommended as an exercise to avoid due to high risk of injury - you can look up on YouTube.
Top

Bankai wrote: ↑
Sat Apr 04, 2020 5:32 am
Sorry to hear about your injury. You might want to reconsider 'good mornings' - they are often recommended as an exercise to avoid dye to high risk of injury - you can look up on YouTube.

Yea I get worried with heavy good mornings and the mechanics are almost the same as stiff legged deadlifts so II think I'll be sticking to that. But really, lots of classic exercices are risky and even more as you get stronger; I think the risks are typically understated. Very few old timers in the gym are still deadlifting and squatting heavy.
Top

Yeah, I agree, often the argument is 'I'm I've been doing this exercise for x years and I never had any issues'. Obviously this doesn't mean that they won't have an issue at some future point. Being 37 I can already see that I'm much more prone to injury than 15 years ago so my first goal is to avoid injury and I start with risk first (similarly to investing). This means no high-risk exercises like dips, flys, anything with barbell behind the head, anything that puts shoulders in a disadvantaged position etc. There are so many exercises to choose from that there's no need risking it for marginal gains, especially that I'm not going for an athlete/competition level of fitness.
Top

Some people have reported having very low oxygen saturation numbers from Covid without experiencing any symptoms so I've been using my pulse oximeter each day to keep track. Normally I am not big on measuring stuff like this and have been surprised to see my resting heart rate fall as I've increased the speed of my runs and done hard hill repeats on the bike. This is the lowest it has been in maybe twenty-five or thirty years. 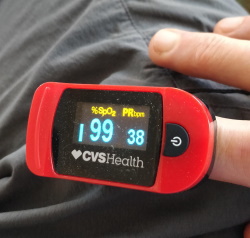 Over the years, I've accumulated a small collection of BeachBody workouts and those have become my main way of working out. Instead of following the various programs, I've now gone through my "library" enough times to pick a workout to match whatever I have strength and energy for, e.g. arms, cardio, ... duration, intensity. This works much better for me, especially after adding P90x which made it possible to take a break with a strength day. This has also been helpful from a push up perspective which used to be my Achilles heel. An added benefit not following a specific program anymore is that this circumvents my strong tendency towards taking a one week break after completing a program... which then becomes a two week break and a three week break.

I've made it my mission---there has to be some goal---to max out as many as possible. Maxing out is completing a workout w/o taking anymore than the prescribed breaks. So, far the following have been maxed out:
Insanity Plyo
Insanity Cardio
Insanity Power
Insanity Max Power
Max30 Sweat Fest
Max30 Cardio Challenge
Max30 Sweat Intervals
Max30 Friday Round 1

Nice work!! I remember when Insanity Max fist came out, we were both doing it and you mentioned you didn't think you'd ever be able to max out. What do you think the difference is between now and ~2 years ago?
Top

I've raised my push up performance from pathetic to about average or maybe even above average when adjusted for age. This is enough to make it through 30-45 seconds of push up drills whenever they're part of an interval. I used to conk out in the second round, always.
Top

I can't believe I started this thread seven years ago. I should be a world class athlete by now.

Instead, since I've started this thread, I've fractured my leg (2x), broken my foot (2x), wrist (2x), and elbow (in 3 places). There were also a couple of surgeries, but we won't count those.

I haven't been exercising in a regular or organized fashion since the lockdown started. I've keep really busy and kind of fooled myself into thinking I was moving enough just doing prep stuff around the house and walking. But gardening doesn't drown the brain in endorphins ... I need to up my game.

I never had the Tommy John surgery on my elbow (thx rona) so I'm not sure I should lift. I'll start by doing the treadmill and bike on a strict schedule. I might see if I have any DVDs of tae bo type stuff that might work my bod without putting pressure on the arm. Maybe I'll break down and do non-weight-bearing yoga. I've never done ab-only workouts but they would probably work too.

I'd love to start running again. It would be nice to run a half or two to prove I can still do it in my 50s. I'd rather avoid a trip to the orthopedist until COVID has passed though, and given my track record

I think I'll stick with the hill climb setting on the treadmill for now to be safe.
Top

I feel you. Even my much more modest fitness aspirations are getting blown to hell by stuff you didn’t even know could happen to your body when you get old(Er.) I won’t reveal full gory details, but apparently if you are a thinning skinned individual, suffering from an illness like unto dysentery can leave you with injuries that make you doubt whether you will ever be able to use a bicycle again. I am picking up a special expensive custom formulation from the compounding pharmacy today, and crossing my fingers that it will work.
Top

Instead, since I've started this thread, I've fractured my leg (2x), broken my foot (2x), wrist (2x), and elbow (in 3 places). There were also a couple of surgeries, but we won't count those.

7Wannabe5 wrote: ↑
Thu Jun 11, 2020 8:04 am
I won’t reveal full gory details, but apparently if you are a thinning skinned individual, suffering from an illness like unto dysentery can leave you with injuries that make you doubt whether you will ever be able to use a bicycle again.

Any chance that the bicycle is the problem or that your position on the bike needs to be adjusted? For example, not every bicycle saddle fits every person.
Top

At this point in my recovery, I can’t even sit in a cushioned chair for very long

Just seeing bicyclists ride past me makes me wince. Luckily, walking is not a problem.
Top
Post Reply
507 posts