How do most people do this whole compulsory 9-5 thing for 40+ years?

Toska2 wrote: ↑
Tue May 21, 2019 1:44 pm
I thought the 9-5 was designed during the industrial revolution. (By new Corporations and Unions with the idea that true freedom is the enemy) (Coincided with mandatory schooling) Keep the workers tired and stressed enough to prevent going out on their own. Let the workers have barely the energy to eat, reproduce and buy the new consumer goods.

I think people have been working hard, getting stressed, and getting tired before the industrial revolution.

The Truth About Primitive Life: A Critique of Anarchoprimitivism

Let’s begin with the concept of “primitive affluence”. It seems to be an article of faith among anarchoprimitivists that our hunting-and-gathering ancestors had to work an average of only two to three hours a day, or two to four hours a day ... the figures given vary, but the maximum stated never exceeds four hours a day, or 28 hours a week (average). People who give these figures usually do not state precisely what they mean by “work”, but the reader is led to assume that it includes all of the activities necessary to meet the practical exigencies of the hunter-gatherers’ way of life.

Characteristically, the anarchoprimitivists usually fail to cite their source for this supposed information, but it seems to be derived mainly from two essays, one by Marshall Sahlins (The Original Afluent Society), and the other by Bob Black (Primitive Afluence ). Sahlins claimed that for the Bushmen of the Dobe region of Southern Africa, the “work week was approximately 15 hours.” For this information he relied on the studies of Richard B. Lee. I do not have direct access to Lee’s works, but I do have a copy of an article by Elizabeth Cashdan in which she summarizes Lee’s results much more carefully and completely than Sahlins does. Cashdan flatly contradicts Sahlins: According to her, Lee found that the Bushmen he studied worked more than forty hours per week.

In a part of his essay that many anarchoprimitivists have found convenient to overlook, Bob Black acknowledges the forty-hour work-week and explains the foregoing contradiction: Sahlins followed early work of Lee that considered only time spent in hunting and foraging. When all necessary work was considered, the work-week was more than doubled. The work omitted from consideration by Sahlins and the anarchoprimitivists was probably the most disagreeable part of the Bushmen’s work-week, too, since it consisted largely of food-preparation and firewood collection. I speak from extensive personal experience with wild foods: Preparing such foods for use is very often a pain in the neck. It is far more pleasant to gather nuts, dig roots, or hunt game than it is to crack nuts, clean roots, or skin and butcher game — or to collect firewood and cook over an open fire.

The anarchoprimitivists also err in assuming that Lee’s findings can be applied to hunter-gatherers generally. It’s not even clear that those findings are applicable on a year-round basis to the Bushmen studied by Lee. Cashdan cites evidence that Lee’s research may have been done at the time of year when his Bushmen worked least. She also mentions two other hunting-and-gathering peoples who have been shown quantitatively to spend far more time in hunting and foraging than Lee’s Bushmen did, and she points out that Lee may have seriously underestimated women’s working time because he failed to include time spent on childcare.

I’m not familiar with any other exact quantitative studies of hunter gatherers’ working time, but it is certain that at least some additional hunter-gatherers worked a great deal more than the forty-hour week of Lee’s Bushmen. Gontran de Poncins stated that the Eskimos with whom he lived about 1939–1940 had “no significant degree of leisure”, and that they “toiled and moiled fifteen hours a day merely in order to get food and stay alive.” He probably did not mean that they worked fifteen hours every day; but it’s clear from his account that his Eskimos worked plenty hard.

@campitor
Yeah, I never bought those arguments either. As far as I know the 9-5 is based on the whole 8 hours of work, 8 hours of sleep, 8 hours of recreation. I believe this was started by labor movements in response to some pretty horrific working hour requirements during the beginning stages of the industrial revolution.

The whole hunter gatherer situation is based on what one defines work as. Am I working when I go to the supermarket to get my food (gathering) or when I'm cooking it? IDK, but It's certainly not included in modern work estimates. I think the modern phenomenon is our attempts to differentiate between work and leisure. Historically these things were intertwined, there was no line in the sand. Incidentally, I feel one of the major Renaissance Man goals is a reintegration of work and leisure.
Top

Even nowadays people have to spend a significant amount of time cooking, cleaning, etc., and that's not included in the 40 hour workweek, so really if we're trying to find out how much better the hunter-gatherers have/had it, we should add the total average chore time to the 40 hours before we make the comparison.

I imagine that the less tough the climate a particular group found themselves in, the less work they had to do to get the food they needed. So groups living in the Arctic and/or the desert would naturally have to do more work to get the same amount of resources, due to the general sparseness of resources in those areas.
Top

While I cannot imagine doing 9-5 for 40+ years I find it useful to look at how others do it. 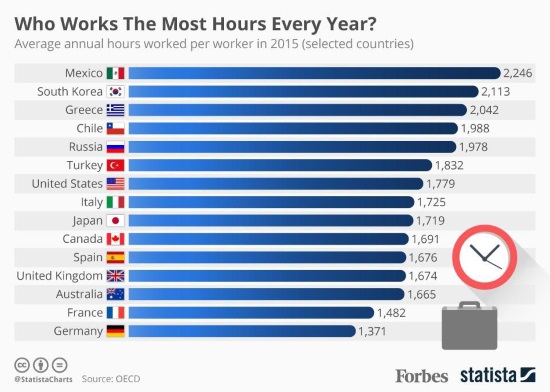 Some Chinese companies advertise 996 to lure talent away from 997 companies. 9am to 9pm 6 days a week.

In my mind I make four clear distinctions.

The third implies doing highly repetitive mindless drudgery. A singular pattern beyond sun up to sun down, rain or shine, winter or summer. I worked at a tier 2 auto supplier cutting parts off a sprue tree. Stuff like that. Its a different type of stress and tired (weariness?) The third also implies that it still happens today.

Judging the popularity of movie-show marathoning and football weekends, people are barely functional outside of work.
Top

In her memoir "Flyover Lifes" about growing up in small, relatively affluent, heavily Republican, Midwestern city in the 1940s, one of my favorite, wickedly insightful, novelists, Diane Johnson, notes that the adults of her childhood worked less than the adults she knows now, even though they had far fewer technological tools at their disposal, such as dishwashers. Their evenings and weekends were filled with activities such as visiting, reading, playing cards, doing crafts, or playing golf. They had the time and energy to engage in such leisure activities, because none of the women worked outside of the home at all, and most of the men had a good deal of autonomy over the necessary work on their prosperous farms, small businesses, or civil service type jobs. They weren't spinning their wheels out at the hyper-bleeding-edge of the extreme efficiency needed to keep the 21st century global system from spinning apart at all tangents.

One thing that really made me think about this was taking a couple data science courses online after reading a number of books on the topic of energy and civilization. Why does the seriously nerdy profession of Data Scientist pay 6 figures? How does this make sense in terms of units of energy being moved across the landscape?
Top

Designing a lifestyle is kind of like designing a garden. Given as much freedom as necessary, each one will likely be very unique.
Top
Post Reply
67 posts