Ego wrote: ↑
Thu Feb 25, 2021 1:34 pm
What is the relationship between the two?
To what degree are they innate vs learned/experienced?
How would one cultivate street smarts?

Some of my best friends barely graduated high school and probably haven't read a book in years, but are very intelligent, witty, and have done very well for themselves professionally and economically.

I think an important component of street smarts is the ability to read people (and situations). Another variable is the ability to solve practical problems. I think about it in terms of IQ vs. EQ, but EQ doesn't fully encompass street smarts. When you can leverage both street smarts and book smarts, you put yourself in position to succeed professionally and in life. I attribute a lot of my professional success to growing up in a lower-middle class neighborhood and having to deal with those social situations in my developing years.

My recommendation to cultivate street smarts is to travel internationally - preferably in a developing country. It requires continuously sizing up your environment and making judgments based on imperfect information to get through the day. India would be ideal, but any large city would work.
Top

I would describe them as two different knowledge acquisition methods or paradigms for organizing data. One all about deriving knowledge in a systematic fashion from an external corpus, and one all about building knowledge and models in an ad hoc fashion based on personal experience.

People seem to do both all the time and about equally well except in fish-out-of-water or buddy cop movies.

I think the underlying assumption of the street smarts discussion in a lot of cases (not necessarily here) is that there exists a skill where you can dropship into a new cultural situation and know exactly how to behave at high optimization. The knowledge to do that is knowledge like all other knowledge, and it takes time to acquire. The best approach is probably to clearly acknowledge your lack of skill in a certain context and move from there.
Last edited by ZAFCorrection on Wed Mar 03, 2021 11:14 pm, edited 1 time in total.
Top

Ego wrote: ↑
Thu Feb 25, 2021 6:20 pm
He had a lot to say on how we Gringos are using our smarts to sabotage ourselves and he worried about his kids growing up here.

Did he give any specific examples? This sounds interesting.
Top


Did he give any specific examples? This sounds interesting.

He did. He told me several stories punctuated by wild gestures. I am going to take my gopro next week and see if he'll let me video him telling stories. He is such a character.

He pointed up to the penthouse of the building closest to us and said the old lady who lives in it owns four condos in the building which she rents on Airbnb. Together the apartments are worth more than $10m. She is eighty years old, has no friends and her family wants nothing to do with her but grudgingly visits every six months. He said her view is unbelievable but she turns her office chair so that it faces away from the window. She spends her time day-trading stocks and never looks up from the computer. He has worked for her for many years and said, "How much money does she need? The lady has worked so hard for so long. I think she forgot how to be happy."

A teenager from another building who had just gotten into a good college decided to jump off the building last year. The story got a little convoluted and I couldn't figure out if the boy died or not but the attempt planted the seed in the mind of a middle aged woman who spent her days in a lounge chair by the pool. A few weeks later she parked her car in the middle of the bridge and jumped. He said she was a sweet lady. "She was bored. Nothing to do. She had no problems," he said while spinning his hand around his head as if he were opening a jar, "so she created them."

Later in the conversation while showing me the modifications he made to the vehicle he said, "You and me, we're problem solvers." I had briefly mentioned the property management gig and he was kind to include me. He said, "We make our lives simple so we can solve the problems that are fun to solve, like this!" He reached down and opened the air valve on the suspension system to show me how he could raise or lower the truck. "It is fun to think about this and then go down to Baja and use it."

I forgot to mention, I began talking with him because my niece sent Flat Stanley on an adventure and I asked if he'd mind if I took a few photos of Stanley in the expedition vehicle. 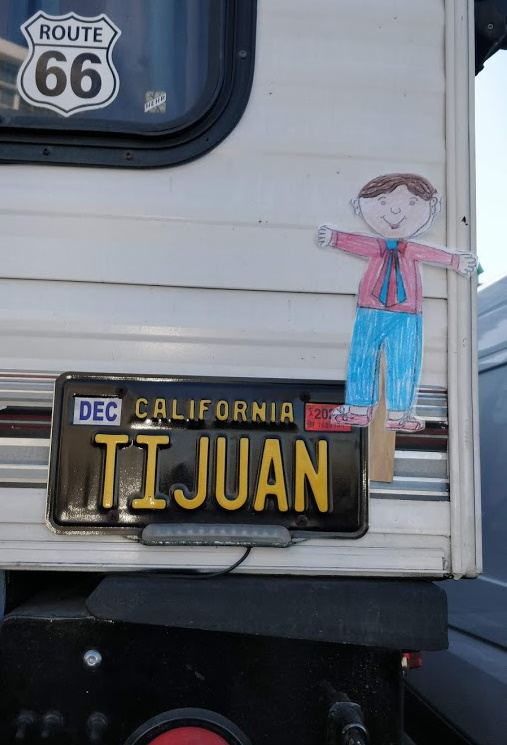 It may be my little bubble but I found street smart people make and then act on their assumptions. Generally these assumptions are correct because humans are predictable and average. If they meet me (or most of you) they would be flummoxed for a bit and move on. I believe their success is choosing an environment that suits their skill and acting more often.

I believe what good street smarts require are about cultivating a wide variety of friends (the term soft touch rings a bell but icr the source). Express a variety of your personality to the world.
Top

Generally, I see it as a flip between introversion and extroversion, because that’s how I experience it. First I read. Then I go out and do. Some humans never read (or only really read 1-3 books) and some humans never really go out and do. For instance, traveling around the world but only within the safe confines of clusters of your own kind of people. I can read every back issue available ion the archives of Fine Home Building, but putting my foot through rotted flooring is what will make me more street smart in the realm of carpentry ( if I survive.)
Top

um... speaking of which (because i misread)... floor is fine but stay away from the roof

From my perspective, book smarts and street smarts aren't a personality characteristic. They're simply words for formal knowledge that you learn in school and informal knowledge that you pick up elsewhere. To the degree that they're an indicator of class, it's usually just a matter of someone either fetishizing or looking down on the other form of learning that they haven't personally experienced.

I've spent a lot of time in factories in Asia, and my favorite person to work with over the years was a really smart guy educated in the US (PhD in manufacturing and/or chemistry, IIRC) who opened a small injection molding factory back home in Taipei. Beyond just being a nice guy, I could always depend on him to be able to solve manufacturing challenges that others would tell me are impossible.

One night after dinner when we were walking through a few local shops, he pointed to some expensive tortoise shell glasses on the shelf and asked "do you know how those are made?" I had no idea. He went on to explain that in school they teach you that you need two colors of plastic, some fancy expensive hot-runner machinery, and a mixer that coarsely combines the molten plastic right at the final moment before it squirts into the tool. You have to get the injection temperatures, pressures, and timing just right or it doesn't turn out, so there's often lots of waste.

Then he grinned and explained that nobody does it that way in China. In most small factories, they just shoot the glasses in yellow and pay a guy with an eye dropper to sprinkle soy sauce on the hot plastic as soon as it comes out of the mold to dye it brown in spots. Most people can't tell the difference. I gathered that he was happy to offer either method depending on my budget and just how particular I was about things being done the American way or the Chinese way.

Book smarts vs. street smarts. I didn't earn a degree in manufacturing that day, and I also didn't suddenly become a local factory hustler. But after that conversation I had both types of smarts on that particular topic.
Last edited by Tyler9000 on Wed Mar 03, 2021 1:50 pm, edited 2 times in total.
Top

Tyler9000 wrote: ↑
Wed Mar 03, 2021 11:24 am
In most small factories, they just shoot the glasses in yellow and pay a guy with an eye dropper to sprinkle soy sauce on the hot plastic as soon as it comes out of the mold to dye it brown in spots.

cheating? or genius? maybe both?