Frank was the resident cuddle pug at ERE HQ for 15 years where he was a source of general silliness and companionship while featuring in the occasional blog post.

Besides serving as an arm rest, a space heater, and an endless source of shedding, he was well traveled and went on many adventures, mostly because he refused to let us out of sight. His favorite animals were plush alligators, squeaky elephants, and bite-sized hot dogs.

Since he was a part of the ERE universe and many of you had the pleasure of meeting him and getting sufficiently sneezed on to make a memorable impression, we eventually figured it was better to make a public announcement to close that chapter of the saga officially instead of keeping it private, which is more to our preferences. 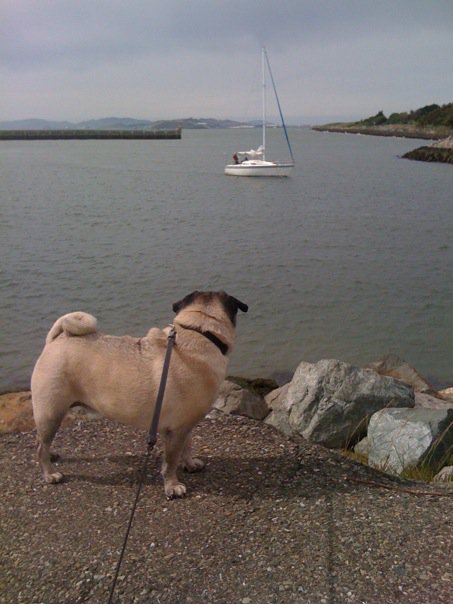 Dang, first ffj's dog and now Frank. Sorry to hear that. Glad I got the chance to meet him, he seemed like a great pup.
Top

15 years is a long, long time together.

May he RIP...he was obviously a great companion.

It will take a long time to get used to the gap he leaves behind throughout your home.
Top

I'm sorry for your loss

ah that sucks, sorry for you and DW jacob.
My view is that generally dogs > humans so I can relate
Top

RIP, Frank. Dogs are better companions than most humans, so it's always hard to say goodbye.
Top

So sorry for your loss.
Top

My condolences Jacob and DW. I wish you both strength in the next few weeks.
Top

Really sorry to hear your news. I know what a wrench it is to lose a faithful, old friend. A reminder that nothing is for ever and life goes on.
Top

So sorry to hear of Frank’s passing. Seventeen years is a great go for a pug!
Top

i saw this way earlier and didn’t want to be the first to post. i’m new here after all, and i understand the wish to keep pain private. but i also understand the loss an animal friend, especially one who lived so long with you as to become an actual family member. having gone through similiar losses i can only say he’ll never really go away, so maybe take comfort in that if you can. some things are forever.
Top

So sorry. Dogs are the best.
Top

16-17 years does seem like a really long life for such a flat-faced example of genetic creativity. I don't think my mom's pugs lasted nearly as long.
Top

Sorry for your loss Jacob. My cat Jack is 17 and... he seems in perfect health if a bit overweight. I consider their love worth the pain of losing them. But I have to tell myself that every time.
Top

I've never met Frank in person, but even to me he's a legend. I'm really sorry to hear he's gone, but congrats on having such a great companion.
Top

RIP and on to the Rainbow Bridge, Frank. No doubt he had a great life. Thoughts are with you Jacob and Dear Wife.
Top

So sorry to hear about Frank. It's hard to lose a family member.
Top

14 years was as far as we could go with 3 different ones, all different breeds. 16-17 years is a pretty good run. RIP.
Top
Post Reply
27 posts