I don't think it has to be turf houses (although I like wofati designs). I was more interested in how they were linked together. If the main parts of the compound were separate, it would be easier and more flexible to allow for different types of homes to connect to the community.

I was thinking of something like this. The walkways could be enclosed or covered depending on the climate. They might also be covered with solar panels or something else. The tiny houses could plug into the walkways. It's a modified version of a campground really, but with a more permanent/communal feel to it. 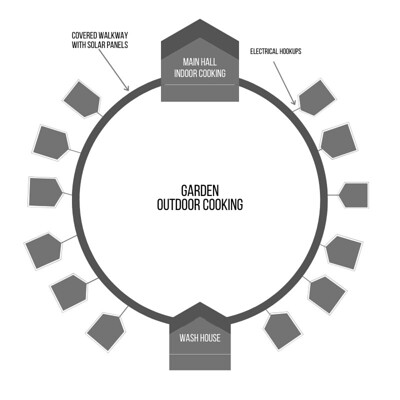 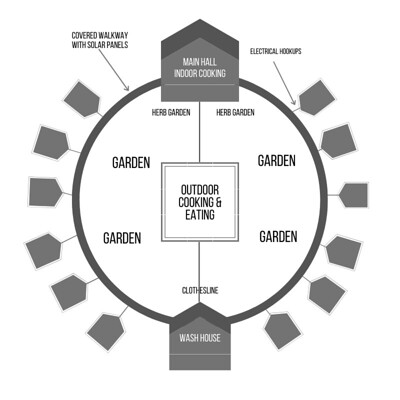 Recently I've been perusing a lot of builds of converted cargo trailers as campers/tiny homes. I particularly like the design of this one: https://youtu.be/JHg4ZMNERFE. I'm not interested in hauling any toys, but I do like the bed design and the open multipurpose area. I feel like some of these tiny homes just try to cram too much into a small space.

The question I've been trying to figure out is where does one park such a tiny home? An RV park, BLM/national park, and campsites seem like the only legal options. I'd love to live in a cargo trailer on someone else's property, like Rob Greenfield did in San Diego or Florida, but as far as I can tell that is illegal in just about any residential area across the country. In most high cost of living areas I've researched, the cost of RV parks is priced in to the point that it is more economical to just rent an apartment. The money aspect starts to make more sense if you go completely off grid and then can stay out primitive campsites which are more affordable, but of course that's more effort in daily living.
Top

You can buy land with an old and possibly decrepit house and live in the back yard in an RV. Not legal but in some places you could get away with it.

The vanlife way is to use National Forest land and BLM land for two week periods, moving on and on and on. This is a good way to do it but then you are somewhat limited where you can go, and there are more restrictions regarding where you can drive a vehicle on federal land. But it is still possible if you don't mind getting remote and living in wilderness areas. Not all areas are nice, some look like wastelands, but you can find nice boondock camps.

RV parks and campgrounds are a possibility but they are not nice places to be, so close to other people.
Top

@white belt, Portland has made a lot of rules about ADU's and tiny houses. The city council has also come out and said they're not going to enforce any of them. People park tiny houses on wheels in the backyards of other people for around $400/month including utilties.

I'm on an intentional community south of Eugene. There are several tiny homes here on RV spots.
Top

reepicheep wrote: ↑
Sun May 24, 2020 8:42 pm
@white belt, Portland has made a lot of rules about ADU's and tiny houses. The city council has also come out and said they're not going to enforce any of them. People park tiny houses on wheels in the backyards of other people for around $400/month including utilties.

I'm on an intentional community south of Eugene. There are several tiny homes here on RV spots.


It seems like some cities on the West Coast are in the process of revising building codes and such, but many on the east coast have not been as progressive.

I guess my problem is I'm not willing to give up the amenities of living in a city to move to a more rural area at this point in my life. I mean all this is looking towards the future anyway as I will continue working full time for another 3-4 years and not have total control over my living location. But since this is the Tiny House thread I will talk through my idea.

I'd like to just be able to buy a small row home lot in a mid-Atlantic city on the east coast like Philadelphia or Baltimore. Then I'd add electricity, gas, and water meters on the property and either build/park some form of tiny house. I'd have a driveway with a parking space at the front of the property that I'd rent out for ~$2400 a year to help pay my property tax bill (this is permitted in areas with row homes as long as neighboring houses have the same setup). My tiny house would be on the back half of the parcel of land. Philadelphia seems a bit unusual among east coast cities in that it minimum structure size is only 120 sq ft. Looking at Zillow, I see some very small lots (this one is 9 feet wide and 80 feet long) in decent/gentrifying neighborhoods for less than $50K. However, additional row home zoning requirements make things a bit trickier and I wouldn't pull the trigger on anything like this until I was certain my structure on such a piece of land would be up to code.

Rough back of the envelope financials are as follows. CapEx: $50k for land and ~$100k to build/place house (erring on high side). OpEx: ~$3k annual for property taxes (based on tax bills from houses on same block) and estimated ~$2k annual for all utilities. Income: $2.4k annual for parking space.

Big city housing for $216 a month is a pretty good deal and $150k is cheap enough where I can purchase everything in cash. In terms of exit strategies, I think as long as I make the property Instagram attractive enough to millenials, I should have no problems recouping my costs if I have to sell. A modern house with a parking space is very valuable in the city.
Top

Oh, I need to go ogle at some of these links! I've really enjoyed the book Little house on a small planet https://www.amazon.com/Little-House-Sma ... 258&sr=8-1 It has a lot of stuff to read, not just pretty pictures. Which I also love.

I've been a tiny/small house fan for a long time. After the whole family of three got sick with mold in an apartment, we bought a huge piece of woodsy land and were in the process of building a small log house of just over 500 sqft (49 m2). The building company had severe financial troubles and it was better to cancel when we were able to get all the money back that we'd spent. We then found a healthy apartment to live in but I was too sick really to think about building, so I was glad the project got cancelled. We still own that land to this day, though have decided to sell it.

Now I just bought a small house, a 1,5 storey 1930's log house of 680 sqft (63 m2 plus a few square meters of lower than 1,6 m under the sides of the roof which don't count) on a half an acre land in the middle of a residential area. About half of the cost was for the lot and the other half for the house.
The house is in solid condition, a bathroom and sauna addition has been built in the early 90's. I may build another tiny /small house on the lot and rent it out. Or my husband could live there

( We are currently separated due to his shitty behavior, but trying to work things out..)
The lot actually has about 330 m2 (3500 sqft) of available building permit! So it would be possible to build a couple of houses, a separate sauna, greenhouse..

I will make some renovations to the house, but I'm not in a hurry. I want to do it using natural materials and nothing too modern that would not look right in the little ol' house. The original wood floors have been covered with boards and plastic mat so I'll rip those out and sand and treat the old floor. The wallpaper is not breathable, at least not all of it, so I want to take those out. I'm interested in treating the walls with clay (inside).
The kitchen looks like 60's or 70's and I think I will hire a local carpenter to build new kitchen cabinets. Iäm thinking of adding a small wood stove which it doesn't currently have. The sauna is in top condition, the bathroom could probably use renovation with modern water insulation at some point. The toilet is, well, interesting.. so I'll re-do that as well, possibly keeping the porcelain that is in there now.

The purchase price was 165K. I currently live in a city where you can't even buy the tiniest studio apartment with that amount!! Under 20 m2 apartments cost more than that.

The yearly tax won't be that much, about 400-450 a year. The lot is being split so that it's not known yet, but I guess it will be about half of what it's now. Electricity about 100 e/month or a little more, but I'll use the fireplace also for heat. I guess the lil' house will cost about 200 euros/month to live in, not counting possible repairs. I pay 1100 e now for rent and water, NOT including electricity, for a one bedroom apartment of 57 m2 (about 600 sqft). My husband pays a whopping 1900 e /month for the big apartment we used to live in. Plus electricity. I just realized that if he at some point moved to my little house, we'd then be saving about 3000 e /month compared to the current situation!!!! If we dumped all that into investments we'd be FI in no time. Or we could take that money and build another small house on the lot.
Alas, I will not move in with him for financial reasons. But I'm starting to digress

Anyway, I think I will start a blog with lots of photos for the house when we get it in the fall. The current owner wants to spend the last summer there.
Top

jennypenny wrote: ↑
Thu Feb 11, 2021 2:53 pm
I like this setup with two adjoining greenhouses -- one for living and one for growing