Jung's principles were later adapted into a test by Katherine Briggs and her daughter Isabel Briggs Myers, a pair of Americans who had no formal training in psychology.

If there were good empirical reasons for these strange binary choices that don't seem to describe the reality we know, we might have reason to seriously consider them. But the fact is that they come from the now-disregarded theories of a early 20th century thinker who believed in things like ESP and the collective unconscious.

Did we assume this is science? I always saw it as more of a concise statement of what your current preferences are, not some immutable personality type.

Also don't ditch ESP - the collective unconscious doesn't like that at all.

Though, are we being hypocrites by requiring the creators of this to have a degree? We always suggest that we don't need college.
Last edited by Chad on Thu Jul 17, 2014 12:38 pm, edited 1 time in total.
Top

I don't mind the fact that they don't have a degree. What I mind is that they were Human Resources professionals. Has anything useful ever come out of an HR department? Ever? They are the administrators of the collective consciousness.
Last edited by Ego on Thu Jul 17, 2014 12:06 pm, edited 1 time in total.
Top

Ego wrote:I don't mind the fact that they don't have a degree. What I mind is that they were Human Resources professionals. Has anything useful ever come out of an HR department? Ever? They are the administrators of the collective consciousness.

That is an extremely valid point.
Top

I think the main problem that psychologists have with the MBTI is this:

The fact the MBTI shows correlation with their preferred test of the same thing, aka the Big5, not withstanding. This correlation means that MBTI is just a different mapping of the same underlying structure.

You tell me what your MBTI types is with percentages, and I'll tell you what your Big5 score is.

Now it can be argued that the theoretical basis of MBTI is outdated or vague, but using that as a main critique when the types themselves seem to be quite descriptive of people just means that some people are unable to tell the difference between the literal and figurative. "Nnnnngg... description as used does not match Webster's dictionary. Brain hurts. Can't think. Reality conflict."

The critique that the discriptions match any personality either shows that people aren't being honest with themselves or that they simply don't know themselves very well. I can't see why the Big5 wouldn't have exactly the same problems, namely because the testing is quite similar.

Overall, I'm pragmatic when it comes to tools. Does the MBTI work? Yes. Is it useful? Yes. Is it some god-given dogmatic truth about the world? No.

I think of the MBTI as a handy taxonomy that can quickly sort people into descriptions that are rather solid. Now a description/classification is not a theory (<- I'm using the scientific definition of theory here. Not the layman). However, I frankly doubt that psychologists posses much of a theory of psychology either given that much of their research is based on the behavior of small groups of western cultured undergraduate who are paid $5 for an hour of their time, neatly summarized with archaic t-tests of the 19th century.
Top

Yeah, I can see how it can be useful. But there is a downside to myers briggs that I don't like at all and was not mentioned in the article. Expectations. The moment I learn that I am an ENTJ, the subject-expectancy effect can strengthen and solidify those characteristics.

Rather than emphasizing the fluidity and the momentary aspects of the test - I am thinking like this today - it seems to encourage a fixed thinking about them - this is who (how) I am. I am a ENTJ and Es are like this so, oh well, that's just me. Notice how we say, "I am an ENTJ".
Top

Ego wrote: Rather than emphasizing the fluidity and the momentary aspects of the test - I am thinking like this today - it seems to encourage a fixed thinking about them - this is who (how) I am.

I disagree. Whether to see the results as descriptive or prescriptive is in the eye of the beholder. (As with practically any test, the scientific understanding/world-view would be that tests are ALWAYS descriptive.) A prescriptive interpretation is not prevented by saying that the results are fluid or momentary, especially when it seems that they aren't---at least not in the short or medium run. For example, if the test result say you're thinking like this today, how does that prevent a prescriptive interpretation? It definitely doesn't work that way when people read horoscopes.
Top

@cael - Apples and oranges. MBTI identifies preferences, not states or traits. If anything, the main interpretative problem is in thinking that an ISTJ would always be better at say accounting than an ENFP regardless. However, preference is not the same as absolute skills.

Confusing self-preference with skill or society-imposed preferences is what makes the test tricky.

I wouldn't really fault the test for being susceptible to "operator error".
Top

Ego wrote: Rather than emphasizing the fluidity and the momentary aspects of the test - I am thinking like this today - it seems to encourage a fixed thinking about them - this is who (how) I am.

I disagree. Whether to see the results as descriptive or prescriptive is in the eye of the beholder. (As with practically any test, the scientific understanding/world-view would be that tests are ALWAYS descriptive.)

Just because something is descriptive in theory does that mean that in practice it is not prescriptive? I agree that it is a tool, and as a tool it can be used in a variety of ways. But I find it hard to believe that telling someone they are for instance a T as opposed to an F wouldn't someone influences how they see themselves and consequently how they engage with the world. 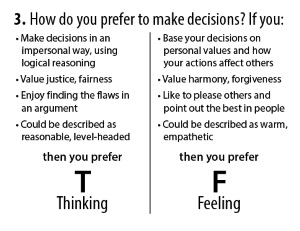 Here is an example of how a supposedly descriptive test can unwittingly become prescriptive.
https://www.youtube.com/watch?v=hTghEXKNj7g
Top

I've always wondered if a person's MBTI type affected their opinion of the test. People with I N T J preferences rely mostly on internal cues and constructs.* People with E S F P preferences rely more on external cues and constructs. I can see where someone with a preponderance of, or higher scores in, the latter might see their personality as more fluid and dependent upon external conditions. I could see them resisting the test more than someone who has stronger I N T J preferences, who probably views those preferences as fixed.

Psychodemia's disregard for the test doesn't invalidate it IMHO, especially if what I just said is true. I can't imagine many INTJ's pursue careers in psychology.


*I don't think constructs is the right word, but you know what I mean.
Top

Hum. Your preferences dictate how you see the test.....That's an excellent point.
Top

I find MBTI to be a useful paradigm for self growth and (to a lesser degree) communication.
Top

I don't know. Maybe it's just much easier for people with I N T J preferences to take the test? I have no problem answering Yes or No to a one-sentence question. Maybe other types feel like they need more information before they can answer?

Does anyone know what types Myers and Briggs were? (can't search--on my phone)
Top

@Ego/jennypenny - FWIW I find it hard to believe that telling someone whether they're F or T actually does influence them. Seriously. That is, I can admit to the possibility intellectually, but I can not empathize with the notion. It's too alien.

Then again, MBTI tells me that as an INTj, I have little respect for authority, so of course I am compelled [by the description] to think/feel this way

Incidentally, I'm pretty sure David Keirsey is an INTP and I'm moderately sure that Isabel Myers was an INFP. Also noteworthy is that the INTJ-MBTI forums are some of the biggest on the internet whereas the forums of some of the other types, such as, you guessed it, ESFP, are practically dormant/non-existent.

I'm not saying that awareness of a person's type influences their self-assessment, although there is lots of evidence of that with astrological signs. I'm wondering if the test is more suited to I N T J types, and therefore more accurately identifies those people and predicts their behavior.
Top

I will go as far as to agree that using MBTI in the hands of some HR drone in order to assess applicants future promotional path is a bad idea. However, like with guns, it's just a tool. If its potential, for better or worse, is not understood by the user, it's better not to use it at all than to misuse it.

Personally, it's hard to overstate how useful I've found MBTI. It's in the top-3(*) of life-changing discoveries I've made.

(*) The other two being learning that the idea of eternal progress is simply the dominant myth of western civilization, but still a myth, and the fact that money-can-make-more-money---something that's obvious to Americans but not to Danes.
Top

The MBTI is pseudoscientific enough that I don't like seeing it used to make serious decisions or taking a major place in the workplace, but I don't like to use the term pseudoscience because I don't think it's on the level of vaccine/autism types. I think it has a place in people's thinking, partially for the reason I'll get into below.


jennypenny wrote:I'm not saying that awareness of a person's type influences their self-assessment, although there is lots of evidence of that with astrological signs. I'm wondering if the test is more suited to I N T J types, and therefore more accurately identifies those people and predicts their behavior.

I don't have hard evidence, but I'd strongly suspect that INTJs and a few other personality types agree more with their results. I also feel as though the MBTI did a lot of provide validation for certain personality types - you don't have to go very far back in history to find social books that describe things we'd call introverted as simply bad. I could be wrong about this, but I think it's plausible that the test has been embraced partially because it provides a significant segment of the population with a way to legitimize their experiences.
Top
Post Reply
39 posts